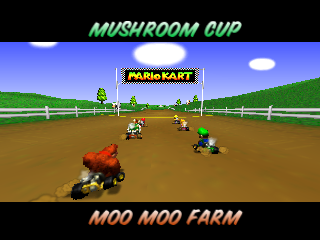 You're a game snob.

Well, probably. If you're reading an online gaming magazine featuring critiques of Japanese-only NES RPGs or the thematic particulars of Final Fantasy IX?, chances are that's the case. Not that there's anything wrong with that. Well, not anything too wrong. I mean, you might be one of those people who refer to game characters strictly by their Japanese names, or you might sneer at people who use standard game pads for fighting games, in which case I'm sad to say that you're a dick. But generally speaking, you're just really passionate about your hobby.

You probably run into trouble, however, in situations involving games which act as touchstones for casual- or non-gamers, but which hold a less-than-stellar reputation among your fellow aficionados. Games like, oh, hell, I dunno, Mario Kart 64.

Mario Kart 64 is nearly synonymous with with the Nintendo 64, especially with the system's multiplayer legacy. When people aren't thinking about Mario Kart when reminiscing about four-player split-screen on the N64, it's only because they're thinking about Goldeneye 007? instead. The second Mario Kart was the system's second-best-selling game ever. It was a no-brainer Virtual Console first-wave release. Thousands of people who aren't gamers have memories of playing in the dorm room down the hallway or at their cousins' place.

But is it any good? 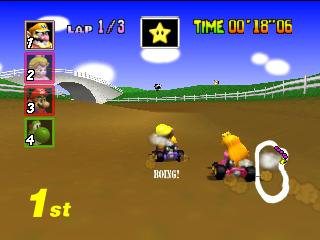 Well, if it was, it certainly hasn't aged well. The prerendered sprites look awkward on the 3D courses. It's home to the world's preeminent example of rubber-band AI. Oh, and Nintendo even gimped the VC release by removing the ability to save times. (If you worry about that kind of stuff. You couldn't pay me to care, honestly.) The series's later installments on the GameCube and DS are much better games all around, even taking into account price discrepancies. So no, I don't recommend downloading it.

But this article isn't about whether or not you should download the game. This article is about what to do when you invariably come across the game in someone else's Virtual Console library.

Imagine the following scenario: you're at a house for an informal get-together and a Wii gets turned on during the course of the night. People eventually get bored of seeing Jesus and Hitler on the same Baseball team and boot out of Wii Sports? to the main menu. Then someone starts fooling around, flipping through Channels, until they stumble upon Mario Kart.

"Oh yeah, me and my roommate played battle all the time!"

Now, what is the best thing to do in this situation? Is it:

A) Scoff at their plebeian game selection and deride their taste while they stare at you quizzically?

B) Shut your mouth and try and have some fun by showing them an interesting glitch that will cement your place as the guy who knows stuff about games? 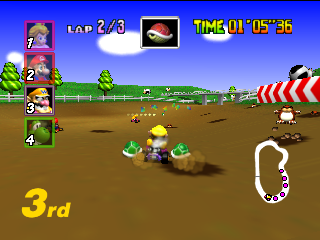 If you answered A, congratulations! You're insufferable! All they wanted was the simple pleasure of firing turtle shells at a monkey and you had to come down on their asses with the same level of disdain a sommelier reserves for wine coolers.

If you answered B, here's a tip: three-player Moo Moo Farm. See, we don't play "Mario Kart" at my house, we play Moo Moo Farm. Through some errant coding, three player matches on Moo Moo Farm are preposterously fast. Sure it has that same novel feel you get when you play Street Fighter II? on a ridiculous speed level, but instead of just being a curiosity to be abandoned after one attempt, it's actually an improvement on the original game.

Everybody knows Mario Kart, but Mario Kart at F-Zero? speeds is a different animal. You start saying things like "first one to fifteen's the winner". You start taking more risks, figuring the next match is forty-five seconds away anyway. You need to be more precise with your steering while under more pressure to be in the right position on the last lap. Races are won and lost in the blink of an eye. It's all quite fun. It's not worth ten dollars, but you're not supposed to have your own copy, remember?

So maybe you can't do anything about your friends' taste in games, but you can have fun in spite of it. Though you might want to forego telling them where you read this little tidbit of info. You wouldn't want to end up looking like a snob, after all.