Article by parish | October 6, 2008 | The eighth release in the Metroid Series

When Nintendo first announced Metroid Prime, fans had a collective freak-out. Sure, this was nearly a decade ago, and the Internet was a calmer, quieter, less obnoxious place all around, but we still had ourselves a grand old meltdown. Oh, yes: We. I did it, and you did it, too, unless you were too young to understand the glory and perfection of Super Metroid back then. In which case, I hope by now you've compensated for your disadvantaged birth date and immersed yourself in the last days of Zebeth. If not, go take care of that right now. This article will wait.

See, now that you've played Super Metroid, you understand its sublime brilliance. And you also can imagine why the news that a bunch of Texans would be converting it into a first-person shooter filled the world with such ominous dread. This was back in the days where we were forced to watch as, one after the other, our favorite classic franchises were "reimagined" in polygons and almost universally came out worse for the wear. Nintendo had skipped over Metroid on N64, which was annoying enough, but to bring it back as a crude mockery of itself! Well, some things were just unacceptable.

And yet, somehow, despite the odds, Metroid Prime turned out to be OK. Better than OK, in fact -- it was great. Sure, it had some issues, like the way it dragged in the second half, and the way the game mechanics and control didn't adapt well into pure action. But it was fundamentally Metroid-ish, a solitary quest through hostile alien worlds to acquire power-ups and press further into danger, beautifully adapted into a new interface. Retro Studios did far more right than wrong, and Prime was a revolutionary creation. It was not at all the hacky, shallow Quake? clone we feared it would be.

No, this is that hacky, shallow Quake clone -- Metroid Prime 3: Corruption.

In a tragic turn of events worthy of ancient Greek theatre, Corruption's greatest failing is also its greatest strength. Retro built the game around the use of the Wii remote as a motion-sensitive, mouse-like aiming device. It's pretty much a realization of what the Wii was created to do, and it makes Corruption the most intuitive chapter of the series yet. Unfortunately, it also ruins the game. Not content to leave well enough alone with the "first-person adventure" concept they had more or less perfected in the original Prime, Retro decided that, hey, now that people can control the game they way they expect, we should make it more actiony! The adventure elements were then downplayed and simplified, and the shooty parts were expanded upon. Corruption is more Metroid Prime Hunters than it is Super Metroid. Corruption indeed. 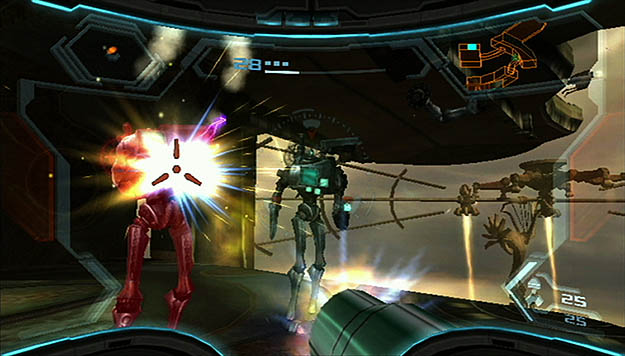 The game had the very poor fortune to come out within a few weeks of Halo 3, right in the thick of hype for the conclusive chapter of Bungie's own shooter trilogy. This had the side effect of making clear just how utterly behind the times Corruption's efforts at being a shooter really were. Whatever you may think of Halo 3, there's no question that its controls, mechanics and AI are pitch-perfect, the absolute acme of console FPS design. For a game that emphasizes action so vigorously, you'd think Corruption would at least take a few clues from the competition. Halo, for instance, actually has something resembling artificial intelligence, with enemies that react to the player's actions with effective and often unpredictable results. Corruption, on the other hand, has mindless mooks who stand in place and obey simple rules, doing nothing to evade Samus' fire beyond the limited patterns programmed into their pathfinding. Halo's enemies had tells and tics and audio cues to tip off the player to their impending actions; Corruption...doesn't. But honestly, expecting useful audio feedback from a shooter that doesn't even feature stereo panning is probably a bit much.

Seriously, who designs a game without stereo audio? Freaking Chrono Trigger? had stereo feedback, with the sounds from all actions panning to the nearest speaker. And that's a 13-year-old role-playing game in which that sort of detail was completely superfluous. Corruption is supposed to be an immersive shooter, but good luck feeling right there in the thick of things when you haven't the slightest clue about which direction an attack is coming from. Stereo is simple. I don't think I'm asking much here. I don't even want surround sound. The Beatles were doing interesting things with stereo sound more than 40 years ago. It's hardly unreasonable to expect a supposedly cutting-edge video game to employ a basic technique that music engineers were playing around with nearly half a century ago, especially when it ties so closely to the actual game design.

That's hardly Corruption's only design failure, of course. It trips up over well-entrenched technology, so it's little surprise that it screws up when it tries to do new and interesting things, too. Most egregious is the control scheme's painfully inconsistent sense of modality. It's a nice touch that Samus' gun arm is almost like a servo-controlled extension of the player's Wii remote -- just point and aim and shoot. But put away the gun and the immersion crumbles; throughout the game, you're expected to use Samus' left arm to perform any number of actions from grappling to code entry. Unfortunately, this is also mapped to the player's right hand. Well, sometimes; occasionally you use the nunchuk to perform left-hand actions; but then you find yourself inputting punch codes with your right hand as Samus uses her left. It's a minor complaint, but an important one: interface glitches like these show an unwillingness on the developer's part to forego gimmicks to preserve consistency. Gimmickry triumphs, adding nothing to the game while chipping away at the subtler underpinnings of the user experience -- a baffling failure from the company that insisted on completely inverting Hyrule so that players were swinging their Master Sword with the same arm as Link.

Also of note is the fact that, while it's great for basic functions like pointing and shooting, the Wii remote is an unergonomic piece of crap. All the functions mapped to the lower half of the controller are a pain and a half to activate, especially in the heat of battle; nothing is worst than being forced to relinquish your grip on the controller to pause or enter Hypermode, especially when said grip needs to remain stable because it directs your point of view in the game. This isn't Retro' fault, but it certainly does crimp the general brilliance of the motion controls.

Speaking of Hypermode, it might actually be the single worst addition to the game: at numerous points in the adventure, Samus is forced to sacrifice a significant portion of her health in order to damage certain foes. A hallmark of good game design is a lack of arbitrary, unavoidable damage, and simply making the player inflict said arbitrary damage on himself doesn't make it OK. Of course, one could make the argument that without forcing Hypermode on players, Corruption would have no challenge whatsoever; chances are good that you'll take more damage from this ritual self-abuse than from anything the bad guys do you. That extends to the bosses, who are painfully unimaginative formulaic rehashes of things we've all seen before, obeying simple patterns and rarely a challenge to a moderately experienced player. Corruption wants to play at being an FPS without actually incorporating the concomitant difficulty level, which means it's lousy both at being an FPS and at being Metroid.

The game's final boss brings all of this to a head. As any final boss should, I suppose, but in this case the ultimate showdown embodies everything bad about Corruption. You face off against a series of tedious, pattern-based battles in the milked-out Zelda boss mold: find a weakness, exploit it, expose a weak point, attack, repeat. The only real challenge stems from compulsory Hypermode. And in the end, Retro takes one of the most iconic foes in gaming history, the Mother Brain, and pits you against a stupid, off-brand version who is nothing more than the hackneyed "spin around the room" bosses we got sick of in 32-bit platformers. They were kind of cool in Mega Man Legends?, you know, because they were new. Nine years later, I think it's fair to expect something a little better from one of gaming's most respected franchises. 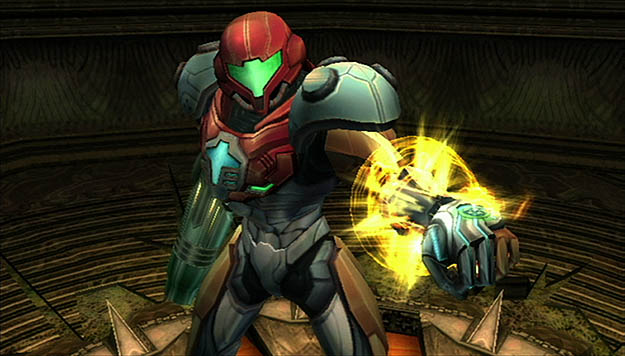 Oh, but choke back your bitter bile and fanboy tears. It's not like Corruption is a failure. It's always competent and sometimes tremendously fun, and it's very, very pretty -- one of the few Wii games whose visuals eclipse the best the original Xbox had to offer. The music is great. When the game is being an adventure rather than a shooter, it's fantastic. Sure, it's occasionally plagued by illogical world design (like the robo-statue that appears to have been constructed thousands of years ago for the sole purpose of smashing a wall for Samus), but the levels are tightly crafted and the tiresome backtracking of the prior games has been more carefully integrated into the flow of the quest. Retro even took time to make fun of anyone who's ever dreamed of playing Metroid Dread, which I have to admire just for its sure bastardliness (even as I blink back my tears of sorrow). And best of all, aside from the modality and ergonomic issues, it controls better than just about any other console FPS ever; perhaps not as precisely as something like Halo or Call of Duty 4 in the hands of an expert shooter fanatic, but far more accessibly for everyone else.

Ah, and there's the rub; the jenga block that sends the whole affair toppling. Like everything Nintendo publishes these days, Corruption is about accessibility uber alles. I can't help but suspect that Retro's designers were strongarmed into fighting their instincts as gamers in order to make their latest creation playable for grandmas the world over. Not that this is the sort of game that would be in any way appealing to non-gamers -- the Metroid Prime series is deeply invested in both a genre and a series which require a certain vocabulary of skills. If ever there was a "gamer's game," this would be it.

But, of course, Nintendo is simply no longer in the business of catering to gamers alone. And in pandering to the widest possible audience, the company has lost sight of the fact that some things just work better if you let them develop naturally for their core audience. The gaming industry's big enough -- its audience broad enough -- that there's room for games as gentle as Animal Crossing, mindlessly accessible as Smash Bros. Brawl and as gamer-oriented as the previous Metroid Primes to exist peaceably in tandem. But you'd never know it to hear Nintendo's corporate mouthpieces talk, and more's the pity.

Some of the company's franchises work perfectly while reaching for the widest possible audience; Super Mario Galaxy, in fact, was all the better for it. But Metroid isn't one of those series, and Corruption wasn't the right game for a baptism in the blue ocean. Samus can roll into a ball, but that doesn't mean she's the ideal avatar for America's soccer moms. So what should have been a great game is instead a monument to misplaced populism.

There's sunshine in the rain, though. Apparently Nintendo will be rereleasing the game's considerably more focused GameCube predecessors for Wii, motion controls retrofitted. Corruption's sacrifice wasn't in vain after all.