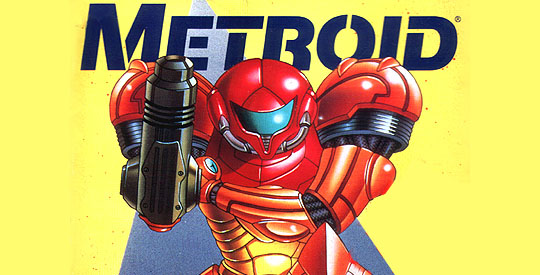 As you of the Internet may have determined sometime in the recent past, based on the fact that I won't shut up about it, I'm a pretty big fan of non-linear exploration-based 2D platform games. Or, as they have unfortunately come to be known, Metroidvanias. It's a kludgey portmanteau of a word, no question about it, but it's certainly far more euphonic than the alternative, Castleroid, which sounds like the sort of personal problem you don't discuss in polite company. I've been playing quite a few of these games recently, primarily as research material for my own attempt to create something similar, and in the process I've been struck by the gradual evolution of this little subgenre, and how sophisticated it was even back in the 8-bit days.

In fact, the Metroidvania concept sprang full-born from Nintendo's skull like a Varia-suit-clad Athena in its first go.

Metroid is generally regarded as the brainchild of the legendary Gumpei Yokoi, which is probably true to some degree -- but if you look more closely, his role in the game was that of producer, which usually means the dude who gets paid a lot to hover in the background and make life hell for the underpaid grunts fumbling their way toward karoshi in order to make impossible milestones and deadlines. The actual director of the game, and almost every "real" (i.e. non-Prime) Metroid game since, is one Yoshio Sakamoto.

But whoever came up with the idea of Metroid: bully for you. It was a remarkably sophisticated console game in its time. Here was planet earth, just a year after Super Mario Bros. had gotten it hooked on the whole idea of side-scrolling platform action, and along comes a game that doesn't just allow backtracking, it requires it.

So much of what we take for granted in games now was a radical first in Metroid. True, non-linear platforming wasn't entirely without predecent -- Pitfall's jungle went in two directions, and that was back in 1983 -- but at the time our side-scrolling vernacular was more or less limited to Mario and Wonder Boy, two men trapped in worlds that could only go right, and right, and right. Metroid cleverly played off of what had come before from the very start; the gamer's instinct was to head right and keep going, but two rooms over was a low-hanging wall that was impassible... unless you went slightly left from the starting point and collected the Maru Mari that would let you roll beneath the obstacle.

See, back before hand-holding and unending tutorials, this was how good developers taught you to play games. They'd look at other games, look at what was different about their own creation, and then employ a contrast that would make you stop and realize, hey. This is something new.

Of course, you can certainly argue that Metroid was, perhaps, a little too subtle for its own good at times. The opening areas (Brinstar and on to Kraid's lair) did a pretty good job of cluing you in to techniques you needed to apply -- you knew to bomb your way down the shaft in the second room because there was a little critter walking around beneath the floor -- but once you got a little further in the whole thing became rather obtuse.

In the early sections, it was obvious that you were supposed to bomb through the floor tiles that looked like big cracked blocks, but Norfair changed the rules. It was full of dead ends that required the pure dumb luck of knowing which completely normal-looking bit of floor or wall needed to be bombed in order to progress. The Wave Beam was a help, since it would destroy fragile walls, but no one actually used the Wave Beam when the Ice Beam was so much more useful. (And arguably essential to completing the game.)

Metroid also offered a really, really big game world. Since NES titles didn't offer pedometers or anything, it's impossible to compare the amount of area it covered with that of, say, Super Mario. At least not without devoting far too much time to calculating pixels, which would push you forever over the edge of loserdom. Given a choice between knowing whether or not the world of Zebes was bigger than the Mushroom Kingdom or ever knowing a woman's touch again, I'll take the latter, thanks.

There was, admittedly, a fair amount of repetition involved in the game. I question the wisdom of placing the world's longest vertical shaft so close to the beginning of the game, for one thing. Is going up, and up, and up (and up) really the sort of thing to entice aspiring explorers to see the whole adventure to its end?

In fairness, much of Metroid's redundancy can be ascribed to memory limitations. The game was originally designed for the Famicom Disc System, which at the time offered much more capacity than a cartridge -- but even then, it's riddled with glitches and bugs borne of cramming so much game into so little space. (And that's without a single byte of information dedicated to background graphics.) Run too quickly between areas and the walls become discolored; get stuck in a door and you can "wall-climb" to other areas without allowing the game to properly load in the new zone's data.

Still, R&D1 made the best of the limitations. Endless corridors and unfairly hidden passages aside, the stark minimalism of Zebes' labyrinthine tunnels made for a game with unprecedented atmosphere. This was enhanced in no small part by "Hip" Tanaka's innovative soundtrack -- once you moved beyond the rousing anthem of Brinstar, the themes shifted to cosmic (Kraid), melancholy (Norfair) or downright unnerving (courtesy of Tourian's dissonant "theme"). And, finally, the maddeningly upbeat "escape" theme, which served as an ironic counterpoint to the anxiety of the dwindling timer and the ridiculously tiny platforms by which you had to ascend one of the tallest shafts in the game.

Metroid holds up remarkably well in some areas, while other portions of the game seem painfully primitive. Of course, you already knew all of this. The important consideration here is what it did to kick off the Metroidvania genre, which as it happens was quite a lot. The basic hallmarks are all here.

Metroid's world is large and open, allowing free exploration and open backtracking. Certain portions of Zebes are inaccessible without the use of specific tools: Maru Mari to roll through small areas, Bombs to open passages, High-Jump Boots to reach the Varia, Ice Beam to ascend certain shafts. In most cases the Boot and Ice sections can be bypassed by exploiting glitches, sure, but the concept is the important thing here.

Much of the game space is locked away -- but instead of using something so trite as keys or ID cards or something to bypass these sticking points, Metroid makes the tools to progress an intrinsic part of Samus herself. This, perhaps more than anything else, is what defines the Metroidvania subgenre and makes it so compelling. Progress follows organically from the act of powering-up.

This means that when you reach a new area, it's not because you've acquired some pointless pick-up used only for that purpose; it's because Samus herself has acquired new capabilities which are woven into the structure of the gameplay. Rather than being sent on distracting fetch quests for useless trinkets, you're on a quest to enhance Samus' skills; this in turn causes new areas to become available. Opening a door with a passcard is much less satisfying than opening a door with missiles that, incidentally, can be used to blast the crap out of bad guys. Reaching a high ledge by activating a switch has nothing on reaching it with the newfound ability to jump twice as high.

It's this clever approach to game design that has been Metroid's legacy to gaming. Err... that and heroines who get progressively more naked based on how well you play. And using concussion missiles to perform lobotomies. In short: what a great game.