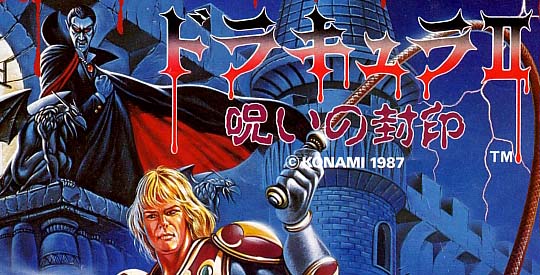 If Metroid was the first mammal on the road to non-linear platform gaming's , Castlevania II: Simon's Quest was a lightly-speckled moth doomed to extinction when its habitat was tainted dark grey by the industrial revolution. (Or any other strained metaphor of your choosing.)

In short, it was a dead end of game design. The "-vania" in Metroidvania may come from Castlevania... but not this Castlevania.

Simon's Quest is best seen as a poster child for the NES era: it's highly experimental, incredibly inspired at times, and generally frustrating to the point of near-unplayability in retrospect.

Its design was even more open-ended than Metroid's -- the entire game map is a circular, interconnected loop with numerous spurs and dead ends to explore. Its style was a natural follow-up to the MSX version of Castlevania, Vampire Killer, which was released concurrently in Japan with the NES game. Both games shared quite a bit of art in common, but where Castlevania's stages were straightforward point-A-to-point-B things, Vampire Killer required a bit of backtracking and treasure hunting to complete each self-contained stage. Ultimately, Castlevania was the better game; its levels were thoughtfully designed for a tough-but-fair challenge level, while Vampire Killer was agonizingly difficult thanks to poor enemy placement and sometimes confusing stage layouts.

Unfortunately, Simon's Quest inherited many of Vampire's Killer's flaws along with its strengths. It's good to buy power-ups and special weapons. It's good to explore. It's good to have currency and experience systems. It is, however, very very bad that these ingredients don't quite gel in the final mix.

Simon's Quest's biggest shortcoming is that it's incredibly obtuse. The towns that dot the Transylvanian landscape are filled with citizens who are more than happy to drop hints for you -- but most of their clues are bald-faced lies. Meanwhile, the legitimate hints are so cryptic as to be useless; "A FLAME FLICKERS IN THE RING OF FIRE" is supposed to make you realize that the Sacred Flame subweapon is hidden in an alcove near swampland and water. Right. For all the good that does, it might as well be talking about Johnny Cash. 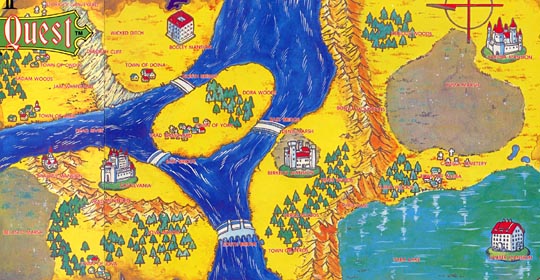 This makes it stupendously difficult to love Simon's Quest, even though much of the game cries out to be snuggled gently. Just look at that world map -- few platformers have ever offered such an enormous countryside to be explored at your leisure. What's not to love? Besides the fact that it's filled with obstacles that can only be surmounted with the use of a FAQ, or Nintendo Power, or hints from friends on the playground, I mean.

If someone tells you that they didn't need any help to sort out the fact that you're supposed to kneel next to a lake while holding a white crystal to find the second mansion, call the police. This person is clearly a pathological liar and likely a criminal.

The mansions are interesting, because they're crucial to the game -- it's within these buildings that the unseen Dracula worshippers have lovingly stored his various bits and giblets to be collected and burned by Simon. There are also dudes who like to hang around the mansions (sometimes lurking outside the boundaries of the game world) selling the stakes Simon needs to claim Dracula's scraps. You wouldn't think there'd be much money in that, but I suppose that when your country is withering beneath a vampire's curse you take what you can get.

Despite their importance, though, the five mansions all look the same. They also feature the most non-linear layouts of the entire game, which is where things sort of fall apart. Enemies in Simon's Quest have the nasty tendency to respawn if you backtrack, a common enough nuisance in the NES library. Unique to this particular adventure is that enemies don't just respawn when you move forward -- they also reappear when you scroll the screen away from their spawn point. As you meander through the dungeons, trying to find your way, you'll frequently find yourself sandwiched by bad guys and suffer unavoidably cheap damage as a result.

Not that death is something you really need to worry about; when Simon runs out of health juice he can continue infinitely... from the exact spot he died on. For a guy under a deadly curse, he's really pretty resilient. Ohhhh... except for one small problem: when you croak, you lose all your current experience, and all your current cash. That's unusually harsh, even for an NES game -- even Dragon Quest only confiscated half your money when you died.

Still, what really saps Simon's Quest of its potential satisfaction is that it fails where Metroid succeeded. Progress is entirely dictated by the trinkets used only for advancing past specific sticking points. Samus' Ice Beam gave her the ability to stun enemies -- and, incidentally, to use frozen critters as stepping stones. Simon gets stronger as the adventure proceeds, but at the end of the game his inventory is packed with items that have been used exclusively to get past arbitrary roadblocks. Carrying Dracula's Heart (rather inexplicably) encourages the ferryman to take you to your proper destination, but it does jack for you the rest of the time. Gripping a crystal will take you to certain manors, but nothing more. It's mundane find-the-key type stuff, dressed up in gothic clothing and painfully complicated by the fact that every person you talk to hates the very concept of "truth."

Simon's Quest isn't a bad game, though -- it's a very good game hampered by the limitations of its time. (The two are easily confused.) It had great graphics compared to its contemporaries, and amazing music. Atmosphere is something you don't often associate with 8-bit games, but Simon's Quest did a fair job of creating it.

Best of all, it was an early example of storytelling through gameplay, that holy grail of interactive entertainment. Castlevania was very detail-oriented, and that thoughtfulness of design carried over into the sequel -- in some ways more than others, of course. Transylvania is a dying land, and as you get closer and closer to the source of the curse, the enemies become more intense while the civilian population becomes smaller (and more frightened). Castlevania, which here is ground zero for evil, bucks the cliché of final areas being packed with the greatest challenges. Instead, Castlevania's immediate environs are deserted; monsters won't come near, and the nearby town is abandoned but for a single crazy (or maybe just very lonely) man.

I still remember reaching the ruins of Castlevania for the first time and having no idea what to expect. The spooky music, the familiar columns, the leap of faith beneath the rubble -- it was intense. A perfect gaming moment spoiled only by the fact that Dracula went down like a complete chump.

Oh well. I guess it was about the journey, not the destination.

Previous: Metroid | Next: Milon's Secret Castle | Back to Metroidvania >>