Long have I fought; hard have I struggled. And at last, I have learned the secret of Milon's Secret Castle. Today, I share that hidden truth with you all. And the secret is:

This game is awful. 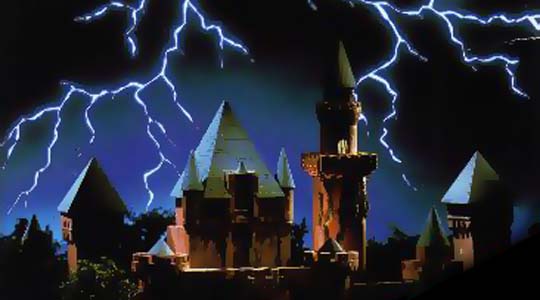 I'd like for that to be the end of it, but unfortunately I'm forcing myself to say something--well, if not exactly insightful then at least amusingly bilious--about each of these so-called "Metroidvaniae." Plus, I slogged all the way through this stupid game, and I demand satisfaction. Even if that boils down to making mean jokes at its expense. I will not be cuckolded!

In fairness, it's probably a little harsh to call Milon "awful." The game's a little bit like Simon's Quest, in a way: it tries to be a deep, engrossing adventure, but suffers from having been crafted in a time of more primitive games. Except that Milon's era was even more primitive than Simon's.

Imagine if cavemen tried to perform a Bach concerto but didn't know how to read music and only had rocks and stretched animal skins to work with as instruments. Or if an 18th century industrial baron decided to fly to the moon but only had a steam engine to work with. Or if someone had tried to film Schindler's List in 1890's with a nickelodeon, before WWII had actually happened. Or....

Well. As terrible analogies are my stock in trade as a professional hack, I easily could go on for days. But the point is: the Milon team at Hudson didn't really have the tools or know-how to realize their vision. Thus the results were incredibly, well... awful.

Milon made his debut in Japan just three months after Metroid -- which means that Hudson's developers were probably submitting the final code right as Nintendo's exceptional solution to the non-linear platformer problem arrived. It's probably a pretty lousy sensation, you know. Waiting for the game you've been working on for the past year to reach the stores, knowing that it's been totally outclassed? Yeah, that's rough. It's probably the sort of thing that drives a person to drink.

(Which could go a long way toward explaining Milon's Star Paradise, come to think of it.)

Milon's castle wasn't an intricate maze of subterranean passages, but it still presented the open-ended design of Metroid, sort of. The castle was divided into four floors that had to be accessed in order, but within each floor were a handful of rooms that players could move between freely. Certain chambers could only be entered after specific conditions were met -- in most cases, once specific tools were acquired. A hammer would let Milon smash through the curiously self-repairing walls, a saw would allow him to break into equally resilient barred windows, that kind of thing.

Sounds pretty good, eh? Well, almost, except that all of these fine ideas are obscured behind the world's most obtuse game design. Seriously, rolling around dropping bombs to find Zebes' hidden passages was awesome compared to the random, arbitrary design of Milon's Secret Castle.

See, Milon had the ability to shoot bubbles, which I guess were made of nitroglycerin or something. They could explode enemies and smash through walls. They were some pretty hardcore bubbles, seriously.

Oh, except for the musical bonus rooms (above left). You had to do a Mario and bump your head on random, unmarked bricks to find those. In fact, this provides us with the Rosetta Stone for decrypting the conversation that led to Milon's creation:

And the sad thing is that, if the game box is to be believed, something like 750,000 copies of the game were sold in Japan. The box does not, however, mention how many were returned in frustration. Aimlessly looking for invisible secrets with a half-witted boy (according to the back story, Milon is so stupid he doesn't even know how to speak or understand human language) who has no recovery invincibility time from enemy hits is about as fun as being hit in the face with a pillowcase filled with spiked metal balls. Which is probably why the sequel was a much less ambitious platformer and the upcoming DS game is like Magical Drop dumbed down to a level that even Milon himself can cope with.

So where does Milon's Secret Castle stand on the road to Metroidvania? Thankfully, the path less traveled. And quickly forgotten.

I will give it this much -- Milon's Secret Castle does one thing better than Castlevania?. Its "castle illuminated by lightning" box art was much, much more attractive than Symphony of the Night's take on the same idea.

Good work, Konami. Your finest game is sullied by the taint of inferiority to this train wreck. I hope you can live with yourselves.

Previous: Simon's Quest | Next: The Goonies II | Back to Metroidvania >>