Older videogames frequently demonstrate a certain anarchic inventiveness lacking in more modern fare. It's probably no fault of the people currently working in the games industry -- developers are as passionate and inventive as ever. But unlike kids in the days of yore, they have to deal with much larger obstacles set in place by Big Business. The games industry is worth more money these days than it used to be, and games are more expensive to produce. Which means it's far easier for the corporate decision-makers to bank on safe, sure-fire successes than radically innovative games that have an equally radical potential for abject failure. See also: EA, the textbook example of the desperate corporate need to Play It Safe.

So something like The Goonies II would be hard to find these days. In its time -- it actually predates Simon's Quest -- it was kind of insanely inventive, a proto-Metroidvania spliced into an adventure game. Since these components had an oil/water sort of interaction with one another, Goonies II was also a horrible failure in places. As messes go it's a rather glorious example of the type, but try telling that to some VP who sees the world in Matrix-vision, where the cascades of backwards katakana computer code are replaced by dollar signs and cost/risk analyses. 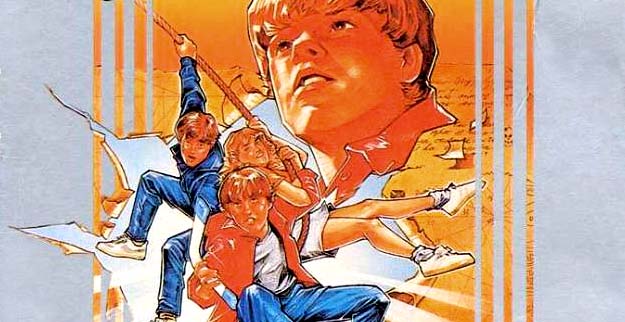 Based, of course, on Richard Donner's 1985 magnum opus-cum-Gen X cultural touchstone, The Goonies II was an unlikely choice for wacky genre-mashing game design. Then again, this was before genre boundaries were as firmly established as they are today; before the federal government had mandated that movie-licensed games should be cobbled-together hackwork that merely walk the well-worn paths of what's come before. So instead of being a mere six-level platformer like its Japan-only predecessor, Goonies II was bigger, more ambitious, more involving.

It was also a lot more frustrating, but who's counting?

At its outset, Goonies II seems like your typical 8-bit platformer. The graphics are a little sharper than those of most of its contemporaries, the controls a little tighter. But the action is typical nevertheless: you control a 3-color kid leaping from platform to platform and beating the crap out of respawning beasts with a yo-yo. While the movie never featured any animal abuse and very little in the way of ridiculous platforming stunts, it's easy to see how this ties in with the film -- the action starts in an abandoned cabin, accompanied by Cyndi Lauper wavetable ditties, and rescuing captive Goonies is the player's primary motivating factor.

Even so, Goonies II quickly demonstrates an utter lack of interest in maintaining any kind of fidelity to its source material. (To say nothing of logic or cohesion.) Konami clearly expended some degree of effort and expense in acquiring a movie license, and in certain areas it captures a sort of solo Goonies vibe, with various Fratellis chasing through in movie-esque locales -- cabins, cellars, caverns, the bridge.

Then you meet the ancient wizard dude who welcomes you to the "warp zone" and find yourself whisked to an arctic cave or a dragon-infested subterranean volcano. From this we can deduce that either (1) One-Eyed Willy took a much more aggressive approach to excavating his lair than the movie let on, or (2) Konami had a lot of nice ideas for little game chunklets and tossed them all into The Goonies II for lack of a better outlet. So its fun, but sort of confusing at times.

Still, there's one important factor that The Goonies II holds in common with the movie that inspired it: a true sense of adventure and exploration. As you roam through One-Eyed Willy's "booie-twapped" caverns and challenge the stunningly diverse geological subsystems beneath Astoria, Oregon, the game's open design begins to take shape. It's possible for Mikey to move freely through the monster-infested caverns -- there are no levels per se, no bosses, no goals besides finding the proper tools and tracking down Goonies.

Really the spiders and jumping devil skeletons and such are little more than a distraction, not the true challenge. Mikey has three lives and infinite continues, and kicking the bucket is the most trifling of setbacks -- a continue puts him right back where he died, minus only his allotment of slingshot ammo.

The Goonies II instead derives its challenge from the obscurity of the Fratelli's hiding places. As Mikey collects more gear and tools he can range further into the caverns, but actually finding where his captive friends have been jailed tends to be needlessly complicated.

And herein lies the game's greatest failing. The basic action is perfectly fun and quite satisfying, especially if you're into open-ended platforming. (And why are you even following this blog series if you're not?) Over the course of the quest, Mikey accumulates an impressive array of skills and devices that enable him to reach new areas, new territories to explore. The environments are startlingly diverse for a game of its vintage, going so far as to offer a completely different gameplay dynamic in a few sections via the diving suit and harpoon gun.

The classic barometer of a fulfilling Metroidvania is how many platforms you can spot lurking tantalizingly out of reach, and Goonies II has its share. Furthermore, the game world consists of a "front" and a "back"; Mikey has to pass between the two map sections in order to access new areas. It's a clever idea that enchances the game's sense of realism (within the bounds of suspension of disbelief, of course). Unfortunately, the connective tissue that binds the game's front and back is an abomination in the sight of god, man and Sloth.

See, located between the front and back sections of the game is a weird intermediate zone which the game refers to as "adventure scenes." Any time you enter a door, you encounter these segments of first-person exploration. It recalls the likes of Wizardry and the old Ultimas, or Dr. Chaos and Shadowgate if your vocabulary is limited to the NES lexicon. Except here there are no hazards to avoid, no threat of violence. You can't die in adventure scenes -- it's all about finding goodies and limited interaction with NPCs. Very, very limited. Basically they give a one-liner of advice and you follow it. You can punch them, but aside from the guy who gives you a candle as a bribe to leave him alone, they'll cease to be cooperative once you get pugilistic.

Mostly, though, adventure scenes are about lots and lots of aimless "try everything" exploration. Punching walls, that's the secret of Mikey's success. Using fists, hammers and (x-ray?) glasses, players can find hidden doors, safes, weak spots in the floor, along with magically-appearing goodies for the action scene arsenal. So in order to advance, you have to punch everywhere.

It kind of stops being fun after all while.

In its way, Goonies II isn't all that different from Milon's Secret Castle. The difference is that instead of shooting bubbles haphazardly while mindless monsters fly around you, you're flailing a hammer haphazardly in stultifying safety. There was a certain degree of hidden stuff to find in the original Goonies game, too, but those were mostly random gems that could be collected for more points. Here, it's impossible to proceed in numerous places without beating the crap out of every room you can find. And adventure scene doors are everywhere.

The lesson here? Padding an adventure with aimless tedium is not a winning solution, especially in an otherwise excellent game.

Goonies II feels a bit like a game of one-upmanship with Metroid -- up to and including the ending. Samus stripped to a bikini if you did well enough, but Goonies cuts to the chase and gives you a completely naked chick. Albeit an anatomically featureless naked chick. Well, naked mermaid. With haunting, pupil-less eyes --

...wait a second. Is Annie the Mermaid actually, uh, Li'l Orphan Annie? Wow, that explains everything. The people behind this game clearly lost their minds about halfway through.

Madness aside, it's still a pretty decent game. Provided you get your kicks from beating up innocent rooms, that is.