Warning: the next sentence might just make your brain explode. 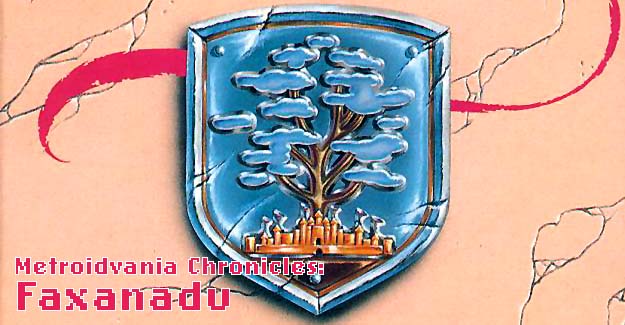 Believe it or not, Faxanadu for NES has aged with amazing grace. Not like the song Amazing Grace, mind you, but the non-divine-intervention kind of grace. Like a ballet dancer... albeit a ballet dancer dressed entirely in shades of brown. (She didn't have enough Golds to buy a white outfit, you see.)

"Faxanadu!?" you sputter. "That... that really brown game? That poor-ass Zelda II ripoff? We're to believe it's actually good in 2006, even though we hated it in 1989? Call me when you grow a brain." And then you go and play in traffic and die horribly.

(Though not undeservedly, after that little outburst.)

Oddly, it's precisely those qualities, once reviled among the NES literati, that have helped Faxanadu weather time's ravages. The "dull brown" graphics weren't (and aren't) precisely exciting to look at, but the unusual color palette is a lot less eye-searing than the usual day-glo excesses of the 8-bit era and seems a lot more in keeping with contemporary game design. Rather than shooting for vivid tones, Falcom went for a limited range of colors that allowed for quite a lot more detail than its contemporaries featured -- making Faxanadu look almost like a Master Sytem game. A good Master System game, not like Alf or something.

The dreary visuals fit the story, too, since the whole point of this particular quest is to bring life back to a giant, withered tree. And dead trees are pretty brown. And even with the dull tones, it still looks way more vivid than Gears of War.

As for those "Zelda II knock-off" allegations, please do bear in mind that Faxanadu is a side-story to a series that began in 1985 and owes far more to its own roots than to Link's black sheep adventure. I know, right? Nintendo didn't invent everything? Shigeru Miyamoto isn't directly responsible for the creation of every video game ever? That sensation you're experiencing is what it feels like when your entire world view is suddenly turned on its head. It's okay if you need to pause for a few minutes to let your brain catch up.

Oh, you're back? Fabulous.

So here's the deal. Of all the Metroidvania games on NES (and their relatives), Faxanadu is the most polished, the most balanced, the most-fully realized example of its kind. Yeah, there's a certain element of abstraction to the whole thing -- vaguely-translated objectives, unexplained item effects, a bit of trial-and-error -- but do recall that this is the 8-bit era we're talking about. Five years of NES game design took us from the inexplicable Bokosuka Wars to this. It's all the more impressive when you stop to realize that this game was created by the same people who cobbled together Legacy of the Wizard. Way to go, Falcom. That's like a guy who can't remember the difference between "your" and "you're" getting hired to the New York Times copy edit desk.

Faxanadu takes place entirely inside the World Tree, the world's largest deciduous and home to about a dozen towns nestled securely in its branches. The World Tree is withering, and naturally the Elves blame the Dwarves rather than stopping to consider that maybe the fact that they've zoned every last inch of the tree for retail and residential has something to do with it. (ProTip: hollowing out a tree does not extend its lifespan.)

The hero, being a patriotic Elf, takes up his liege's request to commit genocide against the Dwarves and sets out with nothing but a handful of Golds with which he buys a pitiful dagger, some puny magic and a lot of good intentions. This being a Metroidvania, of course all of these eventually give way to far more impressive gear. Still, just how pitiful is the dagger? It's so pitiful that it can't even kill the game's wussiest enemies. Like Samus and Mega Man before him, Faxanadu's unnamed hero suffers from a crippling arthritis of the knees and can't kneel, so he's unable to beat half-height monsters with his basic weapon.

The hero's quest of Dwarf-thrashing takes him from the World Tree's desiccated roots, though its trunk and ultimately to its branches. And then some weird foggy fortress place where you fight the final boss, which basically looks like the head of that stupid human-hybrid xenomorph from Alien Resurrection on robo-Baba Yaga legs. In keeping with the narrative standards of the era, this doesn't really make a lot of sense, but the important thing is that when you destroy it you win. So.

Don't worry, haters -- Faxanadu is far from flawless. There's the fact that the enemies are ugly blobs and the controls tend to be a little janky, for starters. The less said about the English script the better. It's occasionally inscrutable, like when you're told to go back and talk to the "old man of the spring" shortly after completing a quest involving three springs and three old men. And is there anything more delightful than earning enough experience to reach the next level only to die shortly outside the nearest town, just seconds away from redeeming your experience for a new title? I say thee nay.

Still, it has a lot going for it -- the world design is remarkably cohesive and the progression involves just enough openness and backtracking to make it all feel epic... but not so much you ever get annoyed. It's one of those rare 8-bit games that actually has atmosphere, particularly in the final areas. They're choked with fog, an effect that was pretty much unprecedented on the NES. Remember when fog was something used for mood rather than to hide a crappy 3D engine? Faxanadu was a pioneer in the art.

And it was probably the first fully-realized Metroidvania game ever, with a leveling system, exploration, tool- and skill-based progression and even some limited character interaction. And bored shopkeepers whose cigarettes Nintendo forgot to censor. For whatever that's worth. (Admittedly, not much.)