The single most telling moment of Shadow Complex comes at the very end, when its hero proclaims, "I'm nobody."

Ah, I'm sorry, I've just given away part of the game's ending. But it really doesn't matter, you know. For all that Shadow Complex touts the involvement of big nerd-culture names like Orson Scott Card, Peter David, and the artist formerly known as Cliffy B, both its story and hero are utterly and completely bland. Insipid, even. I guarantee you will not care about a single word of dialogue in this entire game.

And that's actually quite a surprise! I was slightly concerned about the game's plot after all the chatter that suggests, if the Internet is to be believed, that Card is a gay-hating bigot who thinks genocide is pretty OK. I was worried that the backstory breaks an unspoken pact I make with all my escapist entertainment: "I won't let my political viewpoints get in the way of enjoying you if in return you don't get political on me." Shadow Complex, I'm sorry to say, is based on Card's Empire novels, which are built around the rather bizarre premise that America's disaffected left wing will someday rise up with a sophisticated high-tech paramilitary revolution and overthrow the nation. Seems a long way from the milquetoast dithering I usually associate with the liberal front, but whatever. The point is, I went into the game bracing myself for the brain-numbing stupidity you get when either side of the political spectrum makes an effort to use a game to make a statement.

Turns out it didn't really matter. Shadow Complex turned out to be no different from any other game, and that's precisely why it's all moot. Its political posturing is so inept that you'd never know which point of view was actually being put forward if you weren't familiar with the ancillary works. I guess the fact that the bad guys want to conquer San Francisco first, bombing Coit Tower all Bill O'Reilly style, is supposed to be a clue? The game's crypto-hippie warlord wears Nazi-inspired regalia and speaks in the sort of imperialistic rhetoric one typically associates with fascism, and there's enough of my long-forgotten political science education lurking in the corners of my mind to remind me that these particular positions are pretty much the opposite of bleeding-heart peaceniks. Which is precisely why I can't stand politics in my entertainment: hardly anyone does it well. I don't claim to be a McLaughlin Group expert myself, but I have the good sense to leave that crap out of my writing.

Of course, there is the fact that script doctor David is by all accounts a gay-friendly liberal Jew, which would place him at roughly the opposite end of the political and cultural spectrum of Card (who actively crusades against gay marriage) and the Empire series' creators at Chair (who were involved in the development of Advent Rising, which I'm told was to Mormonism what Battlefield: Earth was to Scientology). It's entirely possible that David was quietly working behind the scenes to diffuse the underlying message of Empire. More likely, though, I think the crux of the matter is that David is a comic book author, and while he does really great work in that particular medium -- his classic runs on X-Factor and the unjustly maligned Spider-man 2099 will always hold a dear place in my heart -- the sort of dialogue he trades in doesn't hold up well when it's voiced aloud. Especially when the voice actor in question is Nolan North, who somehow has become the game industry's go-to guy for the sort of bland, generic heroes you find in games like Shadow Complex. 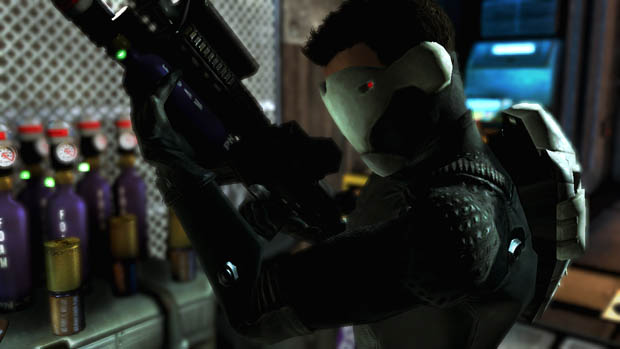 Despite appearances, this is not actually the box art for Haze.

Which brings us back to our hero's climactic one-liner. It's supposed to be a moment of cool, tough-guy posturing, but to me it rang of a confession by the developers: the game's main character is a complete nobody, an unremarkable cipher, a normal guy who just happens to save America from an insidious, high-tech, paramilitary uprising. (Happens to you all the time, I'm sure.) He's the very apotheosis of this generation's faceless, generic lead "characters," every bit as undefined and uninteresting as the blank nobody from Prototype. The very first thing I noticed about him was his dopey half-tuck approach to dressing -- the only place he tucks his shirt is right above his belt buckle -- so it was hardly a surprise that he has the same voice as half-tuck pioneer Nathan Drake.

Which is precisely my biggest problem with Shadow Complex: it's a dead earnest imitation of Super Metroid (with a splash of Metroid Fusion here and there), but it lacks even a sliver of the source material's personality and atmosphere. Sure, there's not a lot to Samus Aran, either, but she was genuinely cool. That's cool, not "cool." She looked interesting thanks to her bulky, futuristic suit, and then -- whoa -- there was a girl under that armor. There was mystery to her, a sense that the games only gave you the tiniest glimpse of who she truly was. You don't learn a lot about Shadow Complex's hero, either, but you never get the sense that you're missing out on anything. What you see is what you get, and what you see ain't much to speak of.

More importantly, Samus explored fascinating realms dripping with menace and isolation. Shadow Complex's world is as trite as its leading man, a bog-standard near-future sci-fi installation built of white plastic and hints of decaying concrete that feels like nothing so much as the Portal facility before that game's hinted-at apocalypse; it's patrolled by faceless soldiers who talk about plot-related nothings with processed voices, the tractor beam gantry Stormtroopers by way of the Combine. Put an iridescent patina on the facilities and I'd buy that the game was a Forerunner installation as some sort of a Halo tie-in. Of course, Halo's taciturn Master Chief looks downright deep compared to Shadow Complex's vapid nobody, Jason. Yes, Jason's appearance changes over the course of the game as you acquire the requisite metroidvania armor upgrades, but all that does is swap out his carelessly-arranged casual dudewear for a hodgepodge of the same boring white armor sported by the bad guys. 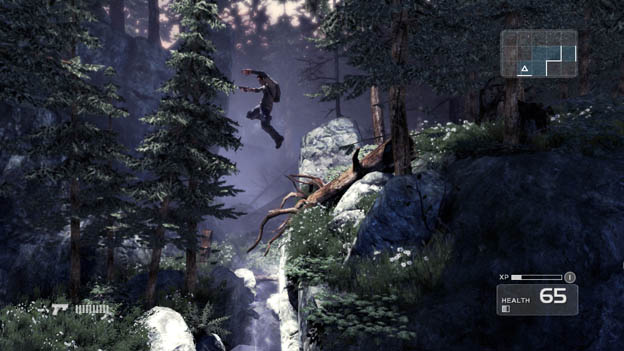 This game brought to you by Ambercrombie & Fitch.

Is it really such a crime these days to create characters? To design interesting-looking heroes and give them actual personalities? God knows I don't go looking for prize-winning writing in my videogames, but at the very least I wouldn't mind a touch of visual creativity. Shadow Complex rips off Super Metroid harder than any game since Castlevania: Symphony of the Night, but at least Konami's effort had the decency to be freakin' gorgeous; Alucard may have done as much to establish the 32-bit generation as the era of morose, effete anti-heroes as any Final Fantasy game you care to name, but at least he had style.

Despite its grating lack of imagination, though, I'm sympathetic to Shadow Complex's aims. It was created by people who really love the hell out of Metroid and wanted to create a game exactly like it. God knows if I ever made my own videogame it would pretty much be a shameless Metroid ripoff, too. Frankly, I'm a little jealous they beat me to it. Chair even took the time to add an Abuse?-style free-aim system, which doesn't work quite as well as advertised but does at least lend the game its own distinct quirks. Whatever flaws happen to be endemic to applying a 3D aiming system to a 2D sidescroller are generally balanced by a fairly intelligent auto-aim feature; you'll have better luck racking up headshots if you just let the game pick your targets for you. It feels a little like cheating, just like it did in the early Tomb Raider games, but better for a developer to err on the side of user-friendliness. And if you like the frustration of controls that fail to work properly in the face of overwhelming odds, hey: There's always the highest difficulty setting.

Honestly, though, if I seem remiss in discussing Shadow Complex's game mechanics, it's because the game is really such a precise impersonation of its source material. Because it hews so closely to Super Metroid, it seems almost a guaranteed success: its strengths are its inspiration's. The weapon selections and functions are excellent, as is the sense of progress as your hero evolves from weakling schmuck to almighty schmuck... although nearly half your powers are crammed into the last hour or so of the game, which makes things like the grappling hook and the missiles feel aggravatingly underutilized. The controls are fairly precise, except where aiming is concerned. And the level designs encourage exploration by rewarding thorough searching with extra powers, although backtracking through the facility is a gigantic pain in the ass.

See how that works? Everything that's exactly like Super Metroid is great, and everywhere Shadow Complex deviates from Nintendo R&D1's template things get rocky. The biggest problem I have with the game isn't that it so conscientiously mimics a masterpiece, but rather that I'm never convinced that the creators quite understood why the game to which they were paying tribute worked so well. Where they've strayed from the safe confines of Samus' example, the game demonstrates iffy design decisions. The controls don't quite work without a helping hand from the AI. The complex is too sprawling for its own good and makes late-game exploration a chore. The best powers are all crammed together at the end, where you barely have time to enjoy them. The plot is dumb. The hero has all the personality of undercooked oatmeal.

If game ideas are music, riffing on a masterpiece is jazz: Structured group improvisation as developers take a standard and make it their own. By that measure, Shadow Complex is a bit like taking "Pick Up the Pieces" and making it sound like something from the Dave Matthews Band. Blandly accessible, safely commercial, perfectly competent, yet ultimately a little hollow and missing the point. Shadow Complex imitates the form of a classic, sure, but it rarely probes beneath the surface of what made Metroid so good.

You improve on a classic through study, through understanding the method behind its mechanics. Shadow Complex never quite gets to the heart of the adventure that inspired it, and its empty excuse for a story lacks a heart to call its own. In the end, it's certainly fun, but its successes seem almost inevitable given its inspiration. It's a solid game by capable creators, and it's practically good by default. Yet for all that it does well, in the end it's a pale Shadow of the original.