Very recently, the Wiis Everybody Votes channel asked the question, Which is cooler: pirates or ninjas? Unfortunately, there was no third voting option that stated Neither. Please delete this channel.

The pirate, once a moderately interesting concept, has been preyed upon by the denizens of the Internet and held aloft as one of many insta-funny ideas, along with monkeys, robots, zombies, and Duke Nukem Forever. And if the art of swashbuckling werent run entirely into the ground by those looking to score some easy jokes in their terrible web comics, Gore Verbinski certainly did his part with a series of movies that started out as cheesy fun based on an amusement park ride but escalated into the cinematic equivalent of a Rubiks Cube suspended in a bucket of rancid Jell-O: Nauseating, and impossible to comprehend.

Back in 1990, though, the situation was much different; not only was the pirate considered an antiquated idea fit only for broken-down amusement park rides, criminal derring-do on the high seas wasn't regarded as an immediately accessible idea for a video game. Unless you happened to be Sid Meier. Yet 1990 was the very year that brought us Lucasfilm Games The Secret of Monkey Island. 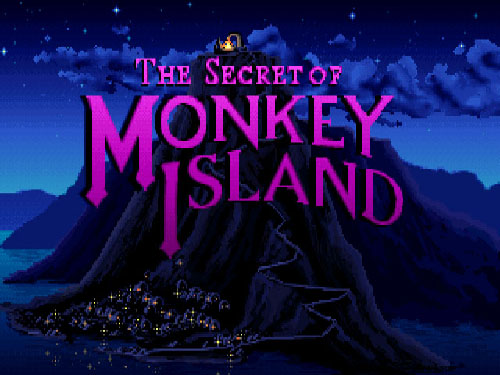 Along with Maniac Mansion, The Secret of Monkey Island stands as one of Lucasfilm Games most popular titles; and, like its classic NES predecessor, Monkey Island was revolutionary in its own way. While Maniac Mansion redefined the genre of the graphic adventure game, Monkey Island's revolution was smaller, more focused; it decisively established what a Lucasarts adventure game should be. The Lucasfilm titles between two games (including Zak McKraken and the Alien Mindbenders, Indiana Jones and the Last Crusade: The Graphic Adventure, and Loom) are not only nearly impossible to find these days, they also each made slight derivations from the graphic adventure parameters established by Maniac Mansion. Zak could be as screwy as a Sierra adventure, in more ways than one; The Last Crusade was saddled with a terrible fighting engine; Loom ditched the point-and-click verb system completely, yet remained far less intuitive than one might expect. Only in Monkey Island did the Lucasarts adventure game find its true formula, the one which was but a vaguely-formed fetus in Maniac Mansion.

Prior to this 1990 epiphany, Lucasfilm adventure games were lacking the three major elements that give the best of them their near-timeless quality; in fact, the graphic adventures of old are arguably more playable than new ones in this modern age where GameFAQs is always seconds away. Monkey Islands first innovation, however, has nothing to do with its mandatory brain-teasers -- though the series' debut it notable for featuring fairly logical puzzles in a time where PC gamers were expected to have dangerously high blood pressure as a matter of course. Yet with all of the talk of Monkey Islands simple but effective and memorable story, people tend to forget a few of the games technical innovations, elements which are often taken for granted now that they've become a standard. They may be far less interesting to contemplate than learning exactly how a rubber chicken with a pulley in the middle is used, but theyre important nonetheless. 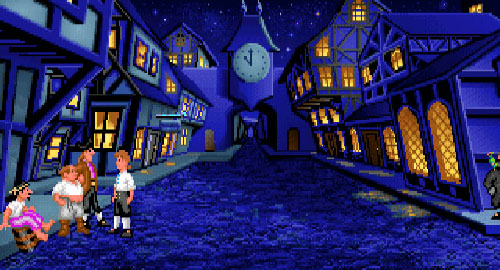 The use of scaling character sprites was fully employed here for the first time, and despite appearances it was more than just a graphical gimmick. That a character's size would change as they walked towards and away from the "camera" certainly improved the look of graphic adventure games exponentially; simply take a gander at the characters awkward, stuttery walks up and down stairs in Maniac Mansion for the shocking evidence. Monkey Island's scaling happens to be much subtler than what would become the norm with Super NES's Mode 7 sprites flying at gamers in all of their blocky glory; Lucasfilms technique doesnt call nearly so much attention to itself. And while scaling is nothing more than a bit of technical trickery, it completely opened up the world of graphical adventure games, which mostly used standard proscenium staging to display most of their settings. If you look for it, you'll see that the titular maniac mansion had barely any more depth than a level of Sonic the Hedgehog.

The ability for protagonists to grow and shrink at will allowed Lucasfilm Games to provide Monkey Island with a variety of settings far more interesting than the genre was accustomed to; this, in turn, was aided by now-famous artists like Steve Purcell of Sam and Max fame lending their talents to the game by actually painting backgrounds that would later be digitized and put into the game. Monkey Island may run at an appallingly low resolution 18 years later, but the artistry is still amazing -- especially the breathtaking landscape of the games Meele Island, made even more memorable by the accompanying series theme from composer Michael Land. 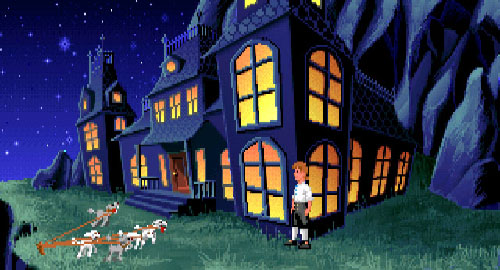 Land would go on to Lucasfilm Games own Nobuo Uematsu, the main difference being that Lands genre of choice crumbled before his work had a chance to degenerate into self-parody. The company had its share of extremely talented composers, including Clint Bajakian and Peter McConnell, but Land was clearly the star of the show. It takes a lot of genius to create a theme thats as memorable as ringtone favorites like The Legend of Zelda and Super Mario Bros., and Land did just that with his theme from The Secret of Monkey Island, which exists in various forms throughout all four games in the series. Sadly, most lists of beloved game composers are disturbingly Japan-centric, robbing Land of the acclaim he should receive for both his work and involvement with the iMUSE system, a revolutionary music-manipulating technology which he co-created with fellow composer Peter McConnell.

Essentially, iMUSE allows MIDI music to be synchronized with in-game action on the fly; and while it wouldnt be fully exploited until cartoonier games like Day of the Tentacle came around, iMUSE made the music of Lucasfilm adventure games feel like a living, breathing part of the experience. And although iMUSE was still developing in The Secret of Monkey Island, the attention paid to the games audio was both refreshing and technically possible - something important to remember now that MIDI is quainter than a country-fried square dance. 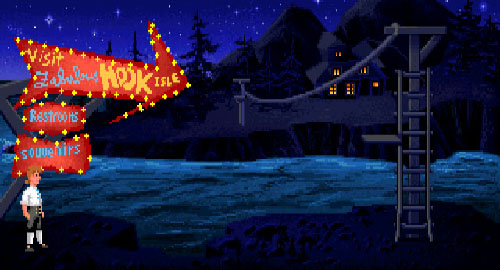 Monkey Islands final definitive innovation has a lot to do with just how forgiving Lucasarts was acting towards gamers in that savage jungle known as the graphic adventure game. In Monkey Island, you cant die or become forever screwed -- though the game does offer one death for Guybrush if youre willing to wait ten minutes for a fairly hilarious demise via the briny deep. Even Lucasfilm was beginning to recognize this superior quality of their own games; this is clearly shown in Monkey Islands fake-out death scene that brings up the once-iconic Sierra adventure game death window, an obvious jab at Lucasfilms direct competition.

The Lucasfilm safety net allowed gamers to be just as creative or stupid as they wanted to be, a fact fully exploted in Monkey Island's conversation system. Not only were its branching conversations impressive for graphic adventures of the era, they also allowed the player to be just as sassy or stupid as they wanted to be when addressing other characters, because most options inevitably let to receiving the same information. Monkey Island proudly establishes this fact very early in the game, where they make it possible for you -- a dork in a ponytail -- to tell a group of pirates: 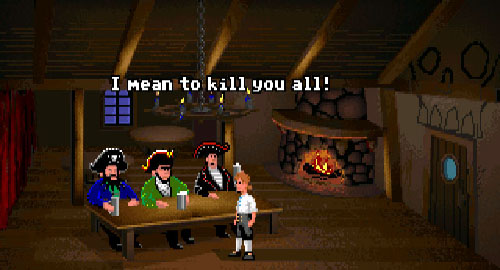 ...with no repercussions. Naturally, this freedom of speech made it possible for the dialogue to be legitimately funny -- as the comedy option could never kill you -- which is something that Lucasfilm games would do more and more effectively as the company's library grew. It is, of course, this combination of both worry-free dialogue and humor that resulted in Monkey Island's most notable feature: insult sword fighting.

Instead of forcing the graphic adventure audience to adapt to some poorly grafted-on action sequence, Monkey Island employs what your lovable TV puppets said could be the most harmful thing of all: Words. By running into the various pirates who wander aimlessly around Melee Island, the player must use trial and error (mostly error in the beginning) to determine which retort matches the insults scurvy sea-dogs chuck at you. Of course, the insults Guybrush slings himself are not quite as raunchy as the "mama so fat" jokes that would eventually burst forth from the early '90s comedy cocoon, but they do at least contain a bit of dry wit mixed with a certain kind of Monty Python zaniness -- absurd, but logically so.

But really, even with all of the technological and design innovations that made Monkey Island so great, one fact remains most important: the game is still undeniably cool. Today, with irritating memes like Talk Like a Pirate Day making life more insufferable, The Secret of Monkey Island makes it easy to forget the current mascara-laden face of piracy in favor of a dreamland containing creaky old Disneyland rides full of rum and rampant sexism. And isnt that the way things ought to be?