Back in 1997, portable games were looked upon with the same contempt as cell phone games experience today: They were pale imitations of the "real" games that appeared on consoles. Meanwhile, RPGs had a loyal cult following, and with Final Fantasy 7's release, that following expanded exponentially. One night after finishing FFVII, my friend Keith and I were chatting on AOL about the great RPGs we could make if we combined our abilities. The topic of company name came up -- just what would we call ourselves? Since our AOL screen names were Xardon and Kupan, we settled on "Team XKalibur." A few days later, we realized we were serious and slowly began making plans.

The secret of our name revealed. If you abbreviated it to "TXK" it had
the added bonus of meaning "Tomm x Keith"... but that was accidental.

Keith and I discussed games a lot. Often he would bring up some concept he had noticed or found lacking in the games he played. Id then muse on the subject for upwards of 5 hours, and we'd bounce story ideas and game mechanic concepts off each other. Ten years later, Id discover this was a healthy Director/Producer dynamic; at the time, though, it was just two guys discussing the games they loved and dreamed of. I didnt get much sleep.

Early in 97, I moderated an interactive story called Final Fantasy: Shattered Worlds. After a while, we had the great idea of removing the Final Fantasy elements and create a next-gen (which is to say, PlayStation) RPG called Shattered Worlds. This way all our friends could feel like they had taken part in our grand project. We set out to find creative persons to give our vision life as I began modifying the plot events into a cohesive narrative featuring fleshed-out characters. We searched the internet far and wide for creative talent, including Vanessa Adams for art and Ian Stocker for music.

One day, after showing off VAs character art to my friends at school, I returned home to work on some project or another and tossed in Ians demo CD. One track caught my attention with its simple, echoing melody. This piece for some reason felt like "love" to me, in a profound, video-gamey way. In a world of booming One-Winged Angels, this song spoke to a deeper place just as strongly. Ian had named this track "Mythri" for reasons Im still not privy to.

At the same time, Keith and I were discussing the worlds need for a "straight fantasy" RPG. Shattered Worlds was set, like Final Fantasy VII, in a techy steampunk version of your average RPG, which was (at the time) loosely anime styled. What we wanted to create was something in an imaginary world that didnt seem familiar. The example we kept coming back to being the crystal ice forest from Secret of Mana?. We now had two projects: Shattered Worlds and "Straight Fantasy Game." (These names became a tradition. Others included "Game 3" and "TommZelda".) 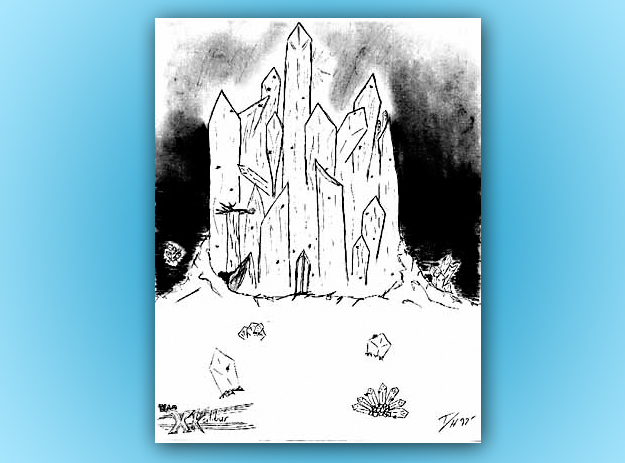 Everything gelled one (possibly) rainy afternoon. Id conceived this crystalline fantasy world that existed in perpetual night -- the only light coming from the crystals scattered across the landscape. Offsprings "Nothing from Something" started playing, and I created the game's main character -- one who wanted to be good, but was so depressed he just had to be destructive. How would he live in such a world? I sketched out a scenario where he assaulted the palace that ruled over this fantasy world, simply because he had nothing better to do. How would players react to being this person? A modern, angry character in an entirely fantasy-based world. It was unique, for its time, anyway. I played "Mythri" immediately after The Offspring finished. These two songs, which sound like polar opposites, seemed like a nice duality. This was exactly the story I wanted to tell. Somehow I convinced Keith I was not crazy, and "Straight Fantasy Game" took the name of the music track that inspired it: Mythri.

Thus, our release schedule expanded: Shattered Worlds on PlayStation (though looking through my files, we apparently aspired for a Dreamcast version too) and Mythri on Gameboy Color, which had just been announced by Nintendo and seemingly ignored by everyone but me. Work continued on the Shattered World concepts with additional character art, and we continued to amass potential contributors. When Ian Stocker backed out because we have him too much of a fan project vibe, music duties passed to Keiths friend Mike. With the character art done, we were excited to show everyone who had participated in Shattered Worlds... but when we did so, strange things happened.

The idea of us turning Shattered Worlds into a game offended one of our writing buddies, and he convinced many of the others that we were trying to profit off of their hard work and that we were creatively bankrupt. Some allowed us permission to use the characters, but a great deal decided to be newly offended and backed out. About this time, Vanessa grew wary of our lack of actual funding and backed out as well. With this, character design duties moved to our new artist, my friend Carolyn Carter. (A happy accident, since Keith and I both felt Carols style was ultimately better suited to our specific vision than Vanessas had been.) 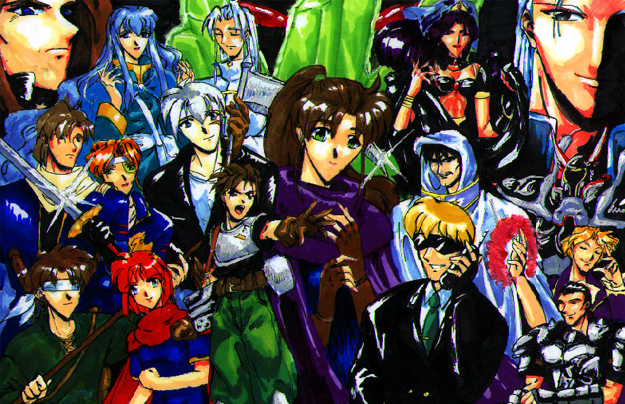 A montage of Shattered Worlds character as drawn by Carol,\\

before she had time to practice with her good markers.

By the end of summer, we had a general plot outline and some gameplay ideas. However, such generalities do not a game design doc make. Things just werent clicking, not least of which was our lack of the immense funding needed to do a console title. At one point we all honestly expected Carol to animate an intro we could use to get funding -- what were we smoking? In an effort to be more realistic about our plans, we shelved Shattered Worlds for the time being and started fleshing out Mythri, a task which quickly became effortless thanks a host of new influences which would inspire me creatively for years to come. The first and greatest of these was Neon Genesis Evangelion?. Carol introduced me to other anime, foremost among them Macross Plus and X, which itself was a huge influence on her art style. Absorbed by the themes of Eva and the stylized darkness of X, we set about creating characters.

Fast on the heels of those muses came Metal Gear Solid, a game whose impact on me cant be measured with earthly instruments. After seeing what a games plot could accomplish, I set about to write my own. The numerous concepts floating around began to coalesce into Mythri. I thoroughly enjoyed my first semester in college, especially my introductory psychology courses. Unlike many of my peers, who began seeing manic depression in themselves when they learned about it, I channeled my education into Mythris characters. In that same class I sketched some rough ideas for my pet concept: What if moon people really had given us the pyramids, Moai heads, and so forth? Lastly, linked back to that afternoon listening to The Offspring, I wanted to tell a tale of dualities.

We chose Gameboy Color for Mythri because we felt competition was too great on console, while on portable our creativity would be enough to outshine much larger companies. While they phoned in their portable RPGs, we treated ours seriously, like a "real" game. Ian Stocker returned as our musician for Mythri, and he coined our motto: "Innovation in the face of limitation." With that in mind, we strode forth to set the portable gaming world on fire.

Our mission statement for Mythri, from the official design document, read:

Mainly, we wanted to create a "real" RPG. Our biggest inspiration, as far as "character-driven innovative RPGs" went, was Chrono Trigger?. Ultimately, though, as several of our synonymous goals listed indicate, what we really wanted to do was tell an engrossing story. The theme of the game was "love," and so my biggest inspiration was Lunar 2: Eternal Blue?, which I felt was the best video game love story to that point. Our first step in matching the big boys would be to tell the story their way. We converted the concept of "anime movies" from Lunar into non-animated "manga stills" for Mythri. (Naturally, Ninja Gaiden was another big inspiration here.)

The dialogue in the Size 3 here is not actually
from the scene portrayed; it's just a sample shot.

These were the crux of our storytelling ambitions and techniques. Where Final Fantasy VI had used dialogue and pantomime to tell its complicated tale, we would use dialogue and huge hand-drawn pictures. Advantage: Team XKalibur. [Editor's Note: Phantasy Star IV would have blown their minds... but in fairness, I was also a Nintendo kid and had no idea, either.] We categorized our stills into three different designations: Size 3 was a character portrait over dialogue for simple important emotions, Size 2 filled the top of the screen with art, allowing enough space below for a dialogue box (for when a character needed to act but still had important things to say), and the majestic Size 1 was a full-screen splash image -- the kind thought impossible on the humble Gameboy Color.

We had our inspiration, our themes, and our canvas... now to tell our story.