Long before it was the name of Quentin Tarantino's heavily stylized film, the term "pulp fiction" stood for the 10-cent magazines popularized in the '20s and '30s. As a direct competitor to the more expensive "glossies," pulp fiction got its name from the cheap paper it was printed on; appropriately enough, the content of these two subsets of American fiction couldn't have been more different. Pulps may have predated rock 'n roll, but they had plenty of sex and drugs -- adventure stories starring legendary characters like The Shadow and lurid tales of the occult were par for the course. But it was the detective stories of the early 20th century that catapulted pulps to skyrocketing sales -- and in the process, birthed the hardboiled genre of fiction.

Hardboiled fiction became an immensely popular subset of American literature thanks to the works of authors like Dashiell Hammett and Raymond Chandler, whose tough guy private eye protagonists found themselves embroiled in gritty, violent murder mysteries. With hardboiled pulp magazines like Black Mask selling upwards of a million copies per issue, it was only a matter of time until the genre expanded. Thus, film noir was born.

Without compromising the lynchpins of hardboiled fiction, film noir offered the genre something morethe power of visual media. Suddenly, the shrewd detectives and femme fatales were placed against the backdrop of a coarse urban sprawl, replete with stark shadows provided by low-key lighting. The powerful cinematography of black-and-white noir quickly became an inseparable component of hardboiled crime drama, thanks in no small part to John Huston's groundbreaking film treatment of The Maltese Falcon in 1941 (in his directorial debut, no less). Even after the classic noir period of the '40s and '50s, neo-noir has continued to wind its way through American cinema through films like Chinatown and Blade Runner.

It was only a matter of time until the genre spilled over into a new medium, of course. This time, it was gaming's turn. Noteworthy video games in the noir vein are unfortunately too numerous to fit within the confines of one article -- but three of the finest merit mention. 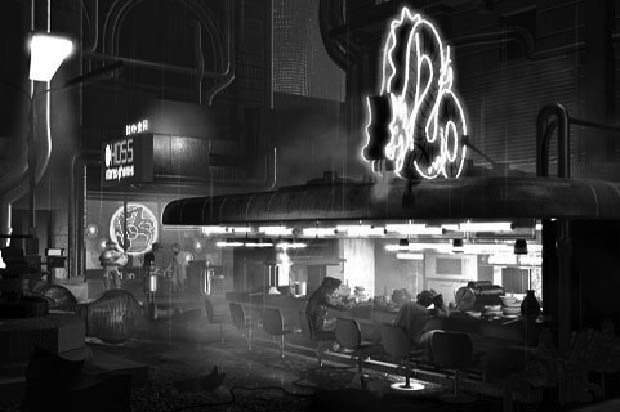 Ridley Scott's Blade Runner, released in 1982, combined a classic science fiction dystopia with the trappings of neo-noir, depicting 2019 Los Angeles as a city overrun by smog and never-ending rain. Somber, shadowy, and deliberately paced, the story of Rick Deckard and his hunt for replicants was a masterful example of film noir... but as a plot-focused movie, it was a surprising choice of inspiration for Westwood Studios, best known for the fast-paced real-time strategy series Command & Conquer. Surprising and fruitful, as it turned out -- Westwood branched off their usual path by building an ambitious point-and-click adventure game around the original Blade Runner storyline, starring both original and returning characters in a fresh plot that runs parallel to the film.

Westwood's Blade Runner places you in control of Ray McCoy, a rookie cop hoping to make his big break by gunning down (or "retiring") a group of rogue replicants (biorobotic humanoids, if you're not familiar with the film). The game appropriately features lots of detective work in traditional point-and-click fashion, searching a variety of locations for clues and questioning the denizens of LA. In keeping with the futuristic setting, Blade Runner skews towards acquiring information more than items, and Westwood integrated both the Voight-Kampff replicant test and 3D photo enhancement technology depicted in the film. Several of the movie's locations also make an appearance, including the Japanese noodle bar, J.F. Sebastian's ancient, dilapidated apartment building, and the majestic Tyrell offices.

Developing a game chock full of FMVs, meticulously detailed pre-rendered backgrounds, and 3D character models was a tall order in 1997. Westwood's lofty aspirations presented a problem: 3D accelerators of the time simply weren't up to the task. So they found an alternate solution. By stitching together voxels (essentially three-dimensional pixels) to fake a whole 3D image, such as a character model, Westwood was then able to use a proprietary rendering engine to push a remarkable number of characters onto the screen at once. That meant any computer with a competent processor could handle Blade Runner -- no GPU muscle required.

Blade Runner's impressively realized characters are also fully voice-acted, and a dialogue tree system influences the outcome of some conversations. The quality and style of your detective work directly affects the game's conclusion, and the plot can ultimately resolve in 13 different ways. The action scenes don't fare as well as the investigation and exploration, but they're few and far between; discerning how to move the plot forward can be a greater challenge, but that's a pitfall nearly every adventure game flings itself into. Though Blade Runner may be best remembered for its unique technical achievements, its pitch-perfect retention of the film's noir ambience places it among the best of the PC adventure genre. 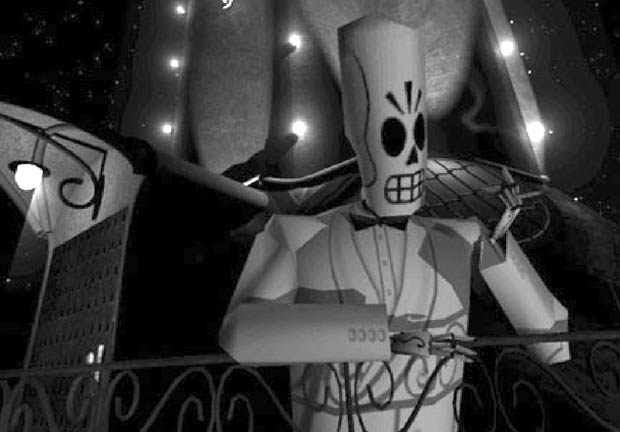 Tim Schafer's magnum opus? In a career spanning celebrated games such as The Secret of Monkey Island?, Full Throttle, and Psychonauts, nominating one that stands above the rest will likely never garner unanimous agreement. However, no other game in Schafer's libraryno other game in existence, reallyso brilliantly combines the shadowy conventions of film noir with sharply-written comedy and a wildly original setting as Grim Fandango, which is set in a stylized interpretation of the Eighth Underworld, an intractable limbo for the recently deceased better known as the Land of the Dead. Those kind souls who lived virtuous lives get to board the fast Number Nine train to their final destination, the Ninth Underworld. The less righteous face an arduous four-year journey or a post-death eternity of menial labor in the Land of the Dead -- just like Manny Calavera.

As an indentured travel agent working for the Department of Death, Manny's having a tough time working off the sins of his former life. But the day-in, day-out monotony of Manny's life gets turned on its head on El Dia De Los Muertos, when he snags a new client: The beautiful and pure Mercedes Colomar. Manny's smitten, all rightbut when he can't get Mercedes the ticket on the Number Nine she so rightly deserves, a conspiracy is clearly afoot. Vowing to save the woman of his dreams and clear his own name, Manny sets off to find Mercedes and set things right.

Grim Fandango plays out across four distinct episodes, each taking place one year apart on the Day of the Dead. Aztec mythology permeates the entire game -- all of the skeletal characters are modeled after calaca figurines, and the dialogue carries a notable Spanish tinge that occasionally dips into full-blown Spanglish. Classic noir imagery is then layered over the traditional Aztec underworld: The Land of the Dead is filled with '30s art deco buildings and paraphernalia, the characters smoke with no qualms about lung cancer, and low-key lighting casts an atmospheric patina over the diverse locations. In Fandango's second act, clearly modeled after Casablanca, Manny runs a casino while channeling Humphrey Bogart's legendary lovelorn protagonisthow much more noir can you get?

There's not a flaw to be found in Grim Fandango's sordid tale of lost love or in its wonderfully charming voice acting. As an interactive experience, though, the game stumbles a bit. Fandango runs on the GrimE engine. It's the successor to Lucasarts' SCUMM, which was developed for Maniac Mansion in 1987 and finally retired with The Curse of Monkey Island? a decade later. Though Grim Fandango uses pre-rendered backgrounds, everything else is in true 3D, and GrimE leaves mouse control behind in favor of keyboard or joystick movement. Manny attentively turns his head to indicate objects in the environment that can be interacted with, but his maneuverability is a little clunky. Worse, some of the puzzles follow grand PC adventure tradition by being painfully opaque. For the aficionados, the challenge simply means a more satisfying payoff; for everyone else, the Internet hosts walkthroughs aplenty. It's a small price to pay to journey through one of the most compelling narratives in video games. 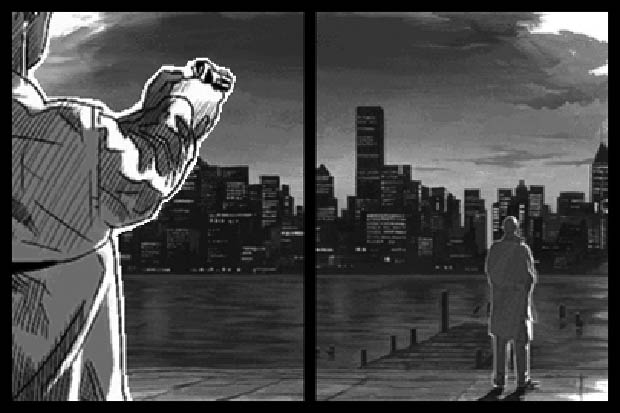 In 2005, the small Japanese development house Cing partnered with Nintendo to release the Nintendo DS adventure game Another Code: Two Memories, better known as Trace Memory in the US. Two years later, they returned with another title for the DS, Hotel Dusk: Room 215. An intricate mystery starring down-on-his-luck detective-turned-salesman Kyle Hyde, Hotel Dusk is a lengthy exercise in investigation featuring an unusually layered cast of characters and a cleverly constructed plot that ties everything together.

Hotel Dusk touches on familiar territory for the mystery genre, but it manages to avoid relying heavily on old clichés. Hyde is doggedly searching for his former partner Brian Bradley, desperate to understand why the man betrayed him and vanished. Three years into the fruitless manhunt, he eventually arrives at Hotel Dusk, a run-down establishment with a shady past. Everyone in the joint has a story to tell -- and a few secrets they don't want to let slip -- and somehow, the clues begin to fall into place. As it turns out, the mystery extends beyond Bradley, and each guest at the hotel holds a piece of the puzzle.

Hyde fits the mold of a gruff, loner detective, but his detailed background and soft heart set him apart from noir heroes like Sam Spade. And while the importance of every guest at the hotel stretches the realm of plausibility, the depth of the character development makes peeling back the layers of the plot consistently enthralling. The dialogue is a treat thanks to a spot-on, colloquial English translation, and Hyde's chapter-ending monologues echo the best gumshoes of film noir.

Hotel Dusk's rotoscoped characters sport a strong black-and-white brushstroke style that really makes them pop. The unique illustrative technique may be what separates Hotel Dusk from its contemporaries more than anything, and gives the impression of characters from a book come to life, raised from the page through some divine enchantment. The 3D environments are attentively detailed for a DS game, but hardly hold a candle to the 2D imagery. The bland top-down map used to navigate the hotel with the DS stylus doesn't do the game's visuals any favors, either, but provides a functional enough way to get around.

The interface and mechanics of Hotel Dusk are a touch on the slow side. Scrolling through text could move at a faster clip, and after the hundredth time, choosing between knocking on a door and simply opening it may feel like an unnecessary waste. Minor quibbles aside, Hotel Dusk offers an expansive environment to explore, plenty of puzzles to solve, and an engaging mystery to unravel. The game typically offers up enough clues to make the puzzles challenging but far from impossible, and despite a heavy focus on text, it's rare to find a conversation that's boring. It almost makes a guy want to be a real detective, you know?