As the Dreamcast drew its last shuddering breath in November 2001 and Sega quietly withdrew from the hardware side of the business, Microsoft entered the world of videogame consoles for the first time. The Xbox was a bold move, and there were plenty of doubts at the time whether Microsoft could really match the heavy competition of Sony and Nintendo. Nearly ten years later, we can see things worked out pretty well -- statistics about red-ringing aside, the Xbox 360 has firmly established Microsoft as a console presence and a leading force in online gaming.

But at the tail end of 2001, the Xbox didnt have much more than Halo going for it, and Sega found itself in the unprecedented position of being a third-party developer. And so, over the next two years, the company began churning out multiplatform games and a generous heaping of exclusive titles. Nintendos GameCube got a couple, like Skies of Arcadia Legends and Billy Hatcher and the Giant Egg, but it was the Xbox that played host to the greatest number of exclusive Sega series and revivals. First there was Jet Set Radio Future, followed by GunValkyrie, Crazy Taxi 3: High Roller, ToeJam & Earl III: Mission to Earth, Shenmue II, and, of course, Panzer Dragoon Orta.

Their abysmal sales werent all caused by the same issues, mind you: GunValkyrie, Crazy Taxi, and ToeJam & Earl have mediocrity to blame, and Shenmue II was a doomed venture by any measure. The sequel to an ambitious story-driven adventure game only available on the Dreamcast, released on a brand new console most of the original fans didnt own? Talk about your niche audiences. That leaves Smilebits other two games, Jet Set Radio Future and Panzer Dragoon Orta, genuine greats that deserved far better than they got. 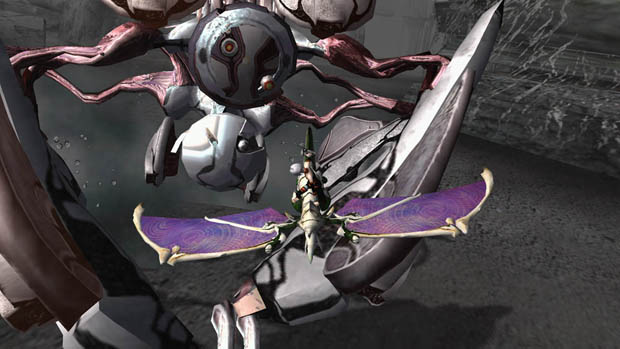 Sadly, their poor sales mean each and every one of these Sega Xbox exclusives can be found for less than $10 within 30 seconds of eBay trawling. Still, theres a bright side to their being utterly overlooked by the gaming public: For the ten bucks Panzer Dragoon Orta costs, youll find yourself in possession of not only one of the finest games to be released for Microsofts Xbox, but one of the most balanced, playable, and challenging on-rails shooters ever designed.

Leaving behind the sprawling RPG quest of its predecessor Panzer Dragoon Saga?, Orta was a return to the series roots, a modern upgrade to the traditional gameplay of Panzer Dragoon and Panzer Dragoon Zwei. While Sega itself has expertly proven with the Sonic series that its completely clueless when it comes to modernizing old franchises, Smilebit knew exactly what to do with Panzer Dragoon. They took the classic elements of the original games as a foundation and added new layers of complexity to create something contemporary. The end result is a straightforward shooter, with few surprises or tricks up it sleeve -- but that makes it all the more engaging, because the hook lies in mastery of the games action.

Ortas setting provides an interesting, though not especially original, backdrop to the shooting experience. Its a tale of an evil Empire, using ancient technology and bio-engineered dragonmares to control the world; a tale of a lone girl with no past and a mysterious purpose; a tale of a single dragon helping her bring peace to the world. Nothing you havent seen before in some variant, in all likelihood. Nevertheless, the unique language spoken in the Panzer Dragoon series and the attention paid to Ortas expansive, detailed environments lend the world an air of mysticism and intrigue.

The crux of Orta lies in its three dragon forms: Base Wing, Heavy Wing, and Glide Wing. Ortas mount can morph between each form instantly to take advantage of their differing abilities. Base Wing, the obligatory middle-of-the-road form, has a rapid-fire gun attack and can lock onto the most targets with its homing lasers. Heavy Wing locks onto far fewer targets, but its lasers pack a serious punch. Glide Wing has no lock-on capabilities whatsoever, but its rapid-fire gun automatically targets enemies, making it the perfect defensive form to handle incoming projectiles. 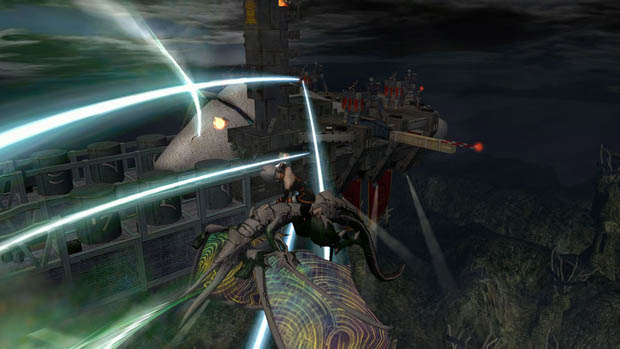 Though Orta is a rail shooter, its far from a static experience, and fluidly dodging around the screen is crucial. Weaponry is only one of the elements distinguishing the three forms -- Heavy Wing is appropriately the largest and slowest form, Glide Wing the most lithe and maneuverable. The dragons glide gauge allows for quick bursts of speed or a hard shove on the dragon-brakes, but Heavy Wing cant make use of this ability at all. Glide Wing, on the other hand, has a large glide gauge, while Base Wing lay between the two extremes.

It doesnt take long to understand how each form works. And thats when youve just begun to play Panzer Dragoon Orta. True mastery comes in the form of an instinctual knowledge of when to switch from one form to another, and back just as quickly: making a split-second jump to Glide Wing to easily target a slew of incoming fire, then flipping back to Heavy Wing to deliver a precious few devastating blasts.

Like Panzer Dragoon Zwei, Ortas linear stages occasionally take branching routes, but theres never a break in the smooth momentum of the level -- rotating the camera or glide-boosting toward an alternate path will seamlessly alter the course of the action. Finding the secondary pathways adds a level of replayability to each stage, particularly because of the Gene Base system. Strands of dragon DNA claimed from defeated enemies can be used to level up each Wing form, improving them in myriad ways. Not only does it increase the overall amount of health Orta possesses, but leveling up a Wing makes it deal more damage, and both Base Wing and Heavy Wing are able to lock onto a greater number of targets at higher levels.

Each Wing is certainly useful in certain situations, but the ability to level up the forms individually (to a maximum of 5) makes it possible to guide Orta towards a particular playstyle. Want to ignore Base Wing and pump all the powerups into Heavy and Glide? It could work. Want to forego Heavy Wings big damage for the more maneuverable Base and Glide Wings? Totally possible.

Picking off dozens of enemies throughout Ortas fast-paced stages, honing an affinity with the three Wing forms is little more than a primer for the challenge waiting at the end of each level. The bosses are typically slow and lumbering, but utterly punishing, firing volley after volley of attacks with a rapacious appetite for the tasty blue pixels that make up Ortas vulnerable life bar. At this point, the structure of the game fundamentally changes; the continuously advancing environment grinds to a halt, as the boss battles usually occur more or less in stasis. Gliding advances Orta to one of four positions around her oversized opponent -- anticipating when to be in front of or behind, left or right of a boss to avoid its attacks is the only way to survive for long. 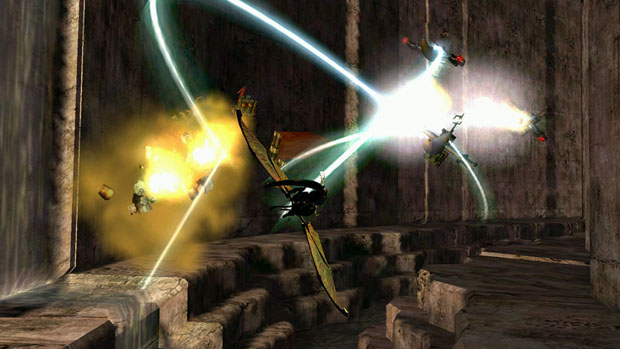 Of course, Smilebit didnt deign to set you against these bosses totally outgunned; each dragon form also has its own unique Berserk attack, a powerful ability charged up by killing wide swaths of enemies. Base Wing sends out a flurry of lasers dismantling everything onscreen, while Glide Wings more limited (but invaluable!) assault actually restores health for all the enemies it dispatches. Heavy Wing lets loose a massive, manually-controlled superlaser thats a real trump card for boss battles -- especially since each berserk attack provides a precious few moments of invincibility.

In fact, despite the spread of offensive capabilities in Orta, success is more about learning to avoid damage than dealing it out. Far from being a bullet hell shooter, Orta follows the more traditional style of deliberate enemy patterns -- patterns to be learned, memorized, and conquered. If you manage to get through Ortas ten stages, give yourself a pat on the back -- its by no means an easy game. For the committed, theres a Hard mode, and scoring for each stage tempts repeat playthroughs to achieve A ranks. Or S ranks, for the truly insane.

Finally, as if developing one of the finest on-rails shooters in the history of gaming wasnt enough, Smilebit brought back Zweis Pandoras Box, stuffed to the brim with bonus goodies. Theres the encyclopedia, full of backstory and nuggets of information about the Panzer Dragoon world; theres the appendix, full of videos and concept art; and then theres more stuff you can actually play. A series of sub-scenarios tell the hardships of a young Imperial boy named Iva whose path crosses Ortas, and the original Panzer Dragoon is thrown in for good measure. Ortas Box Mode may be the biggest draw, however, letting you jump to any level with new mounts and riders not available in the campaign.

With the seven-year anniversary of Ortas release recently come and gone, it seems like the franchise may lie dormant forever. Only five years passed between Saga and Orta, and both games now seem determined to share a quiet legacy: brilliant realizations of their genres, still fun years after their creation, waiting patiently to be discovered and loved. Fortunately, while Saga is an expensive rarity (thanks to its ridiculously small print run), Orta is available and plentiful. All you need is a little cash and a desire to take to the skies; hold tight to the reins and go where the rails take you.