The Dreamcast was a fine system, no doubt about it. As with any other console, its quality wasn't a matter of its procesing power or polygon count -- which were admittedly pretty good -- but because of the games. They came in all varieties of colors and flavors: Jet Grind Radio?, Soulcalibur, Space Channel 5?, Rez, sleeper like Record of Lodoss War?, the Street Fighter III trilogy, Project Justice?, and even Sonic Adventure?, if you ignore the portion of the playable cast whose name isn't "Sonic." Marquee titles all, but they're ultimately surpassed by one other game: Segas last masterpiece. The earth-shattering event that forever changed the industry. The game that gave us a glimpse into the future and made us dream of the great things to come....

That game was Chu Chu Rocket?.

Oh, you thought I meant Shenmue? Er, sorry, but that wasnt so good. Not that it was horrible either, but it wasn't nearly as great as some fans would have you believe. Sometimes I wonder why I even like it at all. 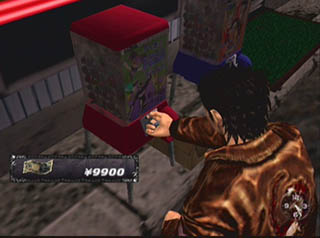 Unlike its litter mates, Shenmue was a 5-year-old game disguised as a techological achievement. In comparison, genuine greats like Rez and Chu Chu Rocket were innovative ideas wrapped in humble packages. So ahead of their time they were that some of them are beginning to find their audience -- Rez in particular. Even so, to say that Shenmue didnt have its share of innovative ideas would be a lie. Still, great as those ideas were on their own, they didnt work so well within the context of the game.

Perhaps the reason Shenmue felt so dated was because it was dated. Its development history spans all the way back to the Saturn era, when director Yu Suzuki built plans to expand the Virtua Fighter? franchise to the RPG genre. In early stages of development, Suzuki's "Project Berkeley" featured a young Akira Yuki as the main character until the entire VF concept was ditched in favor of a new story. (The Virtua Fighter PRG would, sadly, come to fruition in the form of the not-so-well-recieved Virtua Quest?.) Project Berkeley became Shenmue, starring Ryo Hazuki -- who is, essentially, Akira -- seeking Lan Di -- who is, essentially, Lau Chan -- to avenge his fathers death -- who is, essentially Segata Sanshiro. Down to his voice! 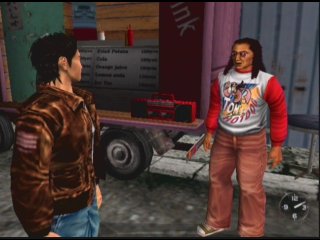 The one problem was the sheer scope and ambition of this game; Suzuki would have needed a miracle to fit all of his ideas into the Saturn's framework. Not only was Saturn less than powerful than its competition, but it was also dying a speedy and unhappy death. (Videos of the game's Saturn build can be found in Shenmue II for both Dreamcast and Xbox, handily demonstrating just how close to the ragged edge Shenmue was pushing the hardware.) Suzuki and his team at Sega's AM2 division decided to transplant the game to Segas next console, Dural, aka Dreamcast. The delays and changes helped boost the production values and development of the title -- as well as the cost, which eventually reached the $70 million mark. It's believed that this made Shenmue the most expensive game ever created until Grand Theft Auto IV?. Small wonder, then, that at this point both the system and the game became a deadly risk for Sega. Some analysts said that for the project to break even, 2 million units would need to be sold -- something that never happened, as the Dreamcast userbase at the time was a little more than half that number.

Sega marketed the game relentlessly prior to its release -- understandable, as it was their main weapon against the ridiculous hype surrounding the unreleased PlayStation 2. Fight hype with hype, and all that. Unfortunately, Suzukis ambitions proved to be too ambitious, even for a $70 million budget and the Dreamcast's hardware. Most of the unique features that sold the game made little difference on a gameplay level. The most important of all, and the one that prompted Suzuki to claim Shenmue belong to a whole new genre called FREE (Full Reactive Eyes Entertainment), was the ability to touch anything, open any drawer or examine every object, turn on or off any light. It was an intricate, unprecedented level of detail for a game...and it was totally usless, except in a few plot-driven events. 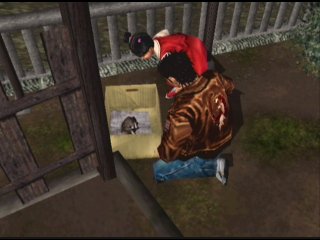 The game's useless selling points are splashed proudly across the back cover of the CD case for all to see. And while they sound great, they really don't matter. At all:

1. A massive and highly detailed 3D world unlike anything ever seen

Certainly Shenmue is "highly detailed," especially considering the time of its realease. But a small district (Yokosuka) and its adjacent harbor hardly qualify as "massive." Now, don't get me wrong. They were reasonably large at the time, but nothing like what Sega had shown in some of the pre-release promo trailers, which showed off parts of Hong Kong, and Kowloon in particular.

The real issue, however, isn't the scale of this 3D world, but rather what you can do inside it. Unfortunately, the only "interesting" things to do are asking people about sailors (or your topic in turn) and practicing your martial art skills in either a parking lot or an empty warehouse. Other less useful actions -- which is to say, totally useless -- include buying stuff, mostly of a Sega fanservice variety, and playing some video games at the local arcade joint.

Now this was interesting. Despite beginning like as an RPG, Shenmue actually had real-time martial arts fighting mechanics instead of turn-based combat. Of course, considering its Virtua Fighter roots, it's not too surprising. In fact, the fighting engine was fun to play for fans of Street Fighter? or Tekken?. The problem, though, is Shenmue was not a fighting game, and VF mechanics tend to be a little too complex for an adventure game.

On top of that, you had to practice your moves a lot before they'd actually do significant damage. This is something which few players did in their first playthrough, as the first half of the game is almost entirely conflict-free. Actually, most of the combat takes place almost at the end, where you fight either one pretty tough boss or 70 (yes, 70) in groups of two or three at a time.

3. Interact with a huge cast of characters with movements as intricate as a twitch of a finger

I don't really know what's this supposed to mean. Are they referring to the characters' movements or the player's? If the former, they're presumably talking about the characters dramatic performances. If it's the latter, though, I don't recall ever having to make movements as intricate as a twitch of a finger. Even the fighting isn't that twitchy.

4. "Magic Weather" and "Time Control" technologies bring this world to life in real-time by dramatically effecting changes to enviorments

Let's quote Wikipedia on this subject:

"Shenmue incorporates an entirely original system to produce the game's in-universe weather conditions. Named the Magic Weather System, it is one of the most important elements responsible for creating the game's realistic universe. For every day that the player progresses through, weather conditions are generated. Conditions vary from rain, to snow, to overcast skies to sunny and several other variations. Furthermore, weather can change throughout the day - for example, a rainy morning followed by an overcast afternoon and evening. No two players will ever experience the same weather conditions, since the game generates random weather every time the game is played (Although the conditions generated are reflective of the season in which they take place). In addition, records of actual weather conditions of the Yokosuka area during 1986/1987 (the time period in which the game is set) were implemented into the game, giving players the option to experience these weather conditions in addition to those which are randomly generated."

So, how fun is that? Actually sounds pretty cool. Ah, but they forgot to mention the fact that some events take place at certain hours of the day, and you can't fast forward time to move on with the story. Hope you like killing time. (This was addressed in Shenmue II, though). 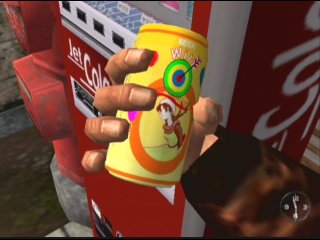 Oddly, the CD box doesn't mention one of the most controversial features in Shenmue: The infamous Quick Time Events or QTEs. There's a whole long-running debate over whether these are a boon or a detriment to gaming, but let's ignore that. What is unquestionably true is that there's no reason to add gameplay elements which have no consequences...and QTEs are entirely consequence-free. Actually, this is true of the entire game. Whether you lose a fight, miss a date or screw up a QTE, you never see anything like a Game Over screen. Shenmue, even more than Metal Gear Solid, is basically a straightforward movie unfolding before your eyes while you press buttons. The DVD included in Shenmue II for Xbox, which presents the first game as a non-interactive movie, is a more authentic and honest version of the product.

If you don't want to play Shenmue or see the movie, though, you can always see the grapchic I made: 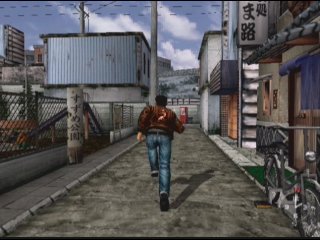 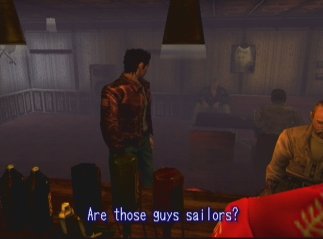 Then you ask (mostly for sailors). 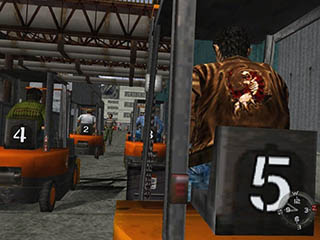 Then you drive a forklift. 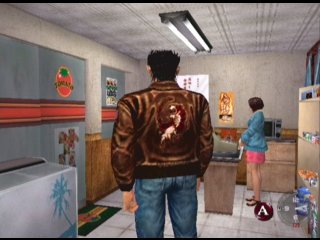 Yet for all its deep flaws, Shenmue isn't without merit. It has a lot of great ideas behind it, even if they don't work together as a whole. Yet, this is after all a Sega game. And like most classic Sega games from the Saturn era and before, it's addictive. No matter how cheesy the plot, no matter how Power Rangers-like the music sounds, no matter how chaotic the gamplay is. You stick with Sega games, because there's so much potential behind them -- even if that potential is never fully realized.

Shenmue is by no means a great precursor of modern gaming, but some of its ideas (such as Quick Time Events or a more immersive sandbox game experience) grew and evolved in other titles by other companies. Capcoms Resident Evil 4?, Sonys God of War? and even Segas own Yakuza? series drank from it -- to say nothing of GTA. While perhaps Shenmue can't defend itself, its legacy speaks for itself.

Oh, and for the record, that wasn't a joke. Chu Chu Rocket really is the masterpiece that Shenmue merely aspires to be.