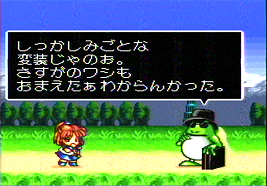 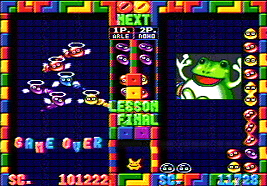 Cursing is masculine. Since I am a boy, society will accept my f-bombs with grace and aplomb. Even so, no one seems to like it when I curse at kindergarten girls.

1) This game looks like it's made for 8-12 year old girls
2) Hey, that's Robotnik's Mean Bean Machine! (or) Whoa, that looks like Kirby's Avalanche!

I've spun a Byzantine web of justification over the years for my obsession with an ancient Japanese console game with an eight-year old girl as its lead heroine -- not to mention widely-known American versions that are less likely to net me a "tut-tut" for swearing. The fact is, Super Puyo Puyo Tsuu Remix is the pure, original essence of a game that was ported to nearly every Japanese computer that existed in the mid-1990s. Half the fun comes from figuring out what all the different modes even are; English speakers get to wade through options such as "Rensa Sibari", "Rule Henka", and "Kata Lock," of which sound similar to English but of course are complete gibberish. Naturally, the game helpfully describes these options with long strings of hiragana and katakana, which are only gibberish if you don't belong to the game's target market, Japan. 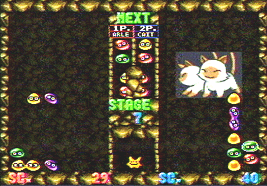 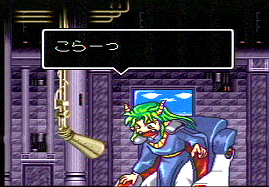 Fortunately Puyo Puyo's match-four-colors-and-they-disappear premise is so ludicrously simple, any seven-year old can pick it up and play it. The language barrier only really matters if you for some reason care what exactly our heroic schoolgirl Arle Nadja is fighting for.

Yes, the character names are all in romaji, so even if you don't read a lick of nihongo it's easy enough to figure out that the mastermind behind these diabolical blob-dropping schemes is none other than Satan Himself -- green hair, horns, evil anime eyes and all. If you somehow make it to the end without losing a single game, he puts on yellow Elton John glasses and becomes Super Satan. Granted, this isn't quite how the Bible depicted him, but we'll permit artistic license as long as we get quality kitsch in return. Besides, who's to say the devil wasn't wearing these same natty shades as he tempted Christ out in the desert? The light's harsh out there. Still, even the most non-literal biblical scholar will agree the "mortal combat through matching colored slimeballs" aspect of the game is utterly apocryphal, although a good deal more exciting than trying to tempt a starving man into eating some bread. Furthermore, the line "Get thee behind me, Satan, or I'll bury your ass in combo garbage so high you won't see sunlight for a week" from 2 Macabees is non-canonical at best, a totally botched translation by deranged monks at worst.

Now, to even catch Super Satan and progress beyond three or four levels, our hypothetical audience of seven-year olds must exhibit cyborg reflexes and cold analysis. Unlike similar falling-puzzle games, Puyo Puyo pits Arle against armies of surreal and often cute adversaries. In addition to fleshed-out character designs, personality, and adorable little 4kHz voice samples, each of Arle's opponents has a different style of play. And by level six, the game gets uncomfortably fast. Satan shows up around level 20, by which point you have less than half a second to decide where a piece shall fall.

Your end goal soon becomes making use of gravity to set up massive combos -- when the first set of four colors disappears, the top pieces will fall to create another block of four, and so on. Watching the CPU's different styles shows the player a wide array of options for succeeding; you can stack columns two wide and trigger chaos, make colored "stairway" columns, or just learn intuitively how to make sandwiches of colors brought together by a single "trigger". One of the most paradoxically successful strategies is to delay gratification -- set up as many groups of three colors without completing a single set, until your options for delaying are totally exhausted.

Although countless revisions of Puyo Puyo have been released with new gameplay gimmicks, Puyo Puyo Tsuu is the classic formula from which all others are based on. But I keep asking myself whether or not Super Puyo Puyo Tsuu Remix would be half as fun if it didn't involve such charming little monsters along with a cutely superfluous setting. Despite their speaking in a foreign language in which I have zero proficiency, over time the characters in Puyo Puyo have become etched into my consciousness.

For instance, I'm not quite sure what Carbunkle-kun is supposed to be, but I'm obsessed with him. Imagine a hand making a peace sign, then give it itty-bitty legs and beady eyes, a huge smiling mouth, and a prehensile tongue five to six times as long as his body. Then name him after a painful skin lesion. Result: A total bad-ass trouble-maker. We also have a tea-drinking skeleton, an evil half-sheep half-tomato, various cute kittens, frogs, witches, minotaurs, harpies, walking fish, goblins, and of course Satan. It should surprise no one that Puyo Puyo's characters originated in a role-playing game, Madou Monogatari, with a corresponding anime.

At the end of the day, it doesn't really matter what a person does for fun. Just know that if you choose to vanquish cute anime characters as a magical schoolgirl with the power of falling colored slimes, chances are your co-workers and friends don't really want to know about it. As the game itself tells us, the safest technique is abstinence. 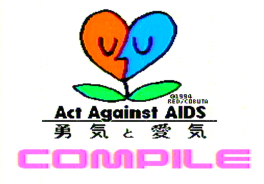 Or rather, keeping your bizarre interests to yourself. But if you must tell the world, be forewarned. Four-player Puyo Puyo gets pretty rowdy. Those little kindergartners are about to have their vocabularies seriously expanded.