Games | Nintendo 64 | The Legend of Zelda: Ocarina of Time

The N64 sucked. No, its true. Sure, I have one, as it played host to a few elite games: Star Fox 64?, Sin and Punishment?, Killer Instinct Gold? (yeah, shut up), Castlevania: Legacy of Darkness? (double shut up -- it was way better than Lament of Innocence). And, of course, the Zelda games. You'll like note that the games I've listed are few in number, and one wasn't even released domestically until Virtual Console rolled around. So that amounts of five years of suffering through Nintendo's crap for a paltry handful of games. Maybe Mega Man 64? was good, but I played it first (and in a superior form) on PlayStation. Likewise Resident Evil 2?. Suck it down, Capcom! Speaking of which, wasn't Daikatana on N64?

Meanwhile, Mario 64 may be a well-regarded game, but I hate it. It was one of the forerunners of the lamentable combination of polygonal impreciseness, crappy 3D camera, and platforming collectathons. Frankly, I preferred Crash Bandicoot. Not often did I agree with the hyperbole masters at Diehard GameFan, but their sentiment that full free-world exploration wasn't necessarily the most fun thing for a platformer mirrored my own. To paraphrase their ancient wisdom, when I'm having so much fun with Crash, why would I want to go anywhere else? These collectathons became the console's best-known content. Mario 64 was just the beginning; almost all of Rare's 64-bit output was the same.

And with so much other collection-based crap on the system, why would anyone look forward to an N64 Zelda? After everything else I'd seen on the system, all I expected to get was a chance to run around a Hyrule-themed Mario 64-esque world picking up Triforce pieces in place of Stars. It didn't help to see those first few crappy screens of the game, or to know that Nintendo had scaled the system back from a high-capacity disk in order to fit a cartridge. Talk about rubbing in the salt -- why cartridges, you damned filthy fools? Hadn't you seen that Final Fantasy VII ad? We wanted our ugly-ass CGI cinemas, and we wanted them now! 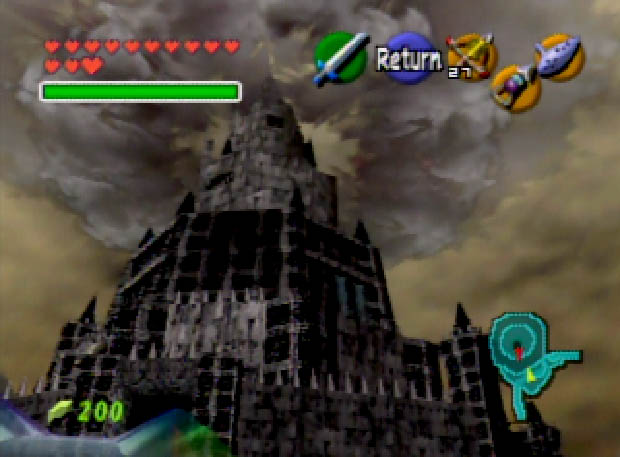 But of course the N64 Zelda, ultimately named Ocarina of Time, wasn't the garbage I had expected. On the contrary, it's my favourite game of all time. I'm certainly not alone here; Metacritic lists Ocarina as the number-one rated game of all time. Of course, Metacritic also lists the deplorable Grand Theft Auto IV? as the runner up...but, you know, whatever.

Despite Ocarina's brilliance, it took me a while to warm up to it. Even though the N64 was ostensibly the most powerful console on the market -- it had something to do with SGI workstations, like the ones in Hollywood movies! Have you seen Jurassic Park? WOW!!! -- most of the games looked pretty terrible. You know, charitably speaking. The ubiquitous N64 pea-soup fog in games like Turok? was certainly present in Ocarina, and gives one the impression of visiting Beijing in summer. (That's a negative, by the way.)

My first experience with Ocarina was pretty underwhelming, even considering my budding hatred for the N64 and willingness to spit blazing hellfire upon it. Young Link wakes up in a mushy pre-rendered mess of a house, goes outside and talks to his dickhead neighbours, then screws around interminably while finding his sword. Me, I hate when games don't start in media res. Listen, developers, I don't want to plow through tracts of stillborn, trite dialogue -- yes, yes. Crystals or some such. Whoopie. Piss on FFVII all you want, but it starts with a sweet Blade Runner reference, then swiftly moves to eco-terrorism. Awesome! And prior Zeldas had kept things punchy, too: in A Link to the Past you run out in the rain to sneak into the castle, see your nameless uncle slaughtered, rescue Zelda then pull the wrong switch and get ambushed by snakes -- err, ropes. All this in the first thirty minutes. Thirty minutes into Ocarina, you are just approaching the Great Deku Tree, and that's if you're snappy. Now giant trees full of monsters is a theme I normally gravitate towards, but the first dungeon in Ocarina in unusually boring.

Then you get to Gohma. 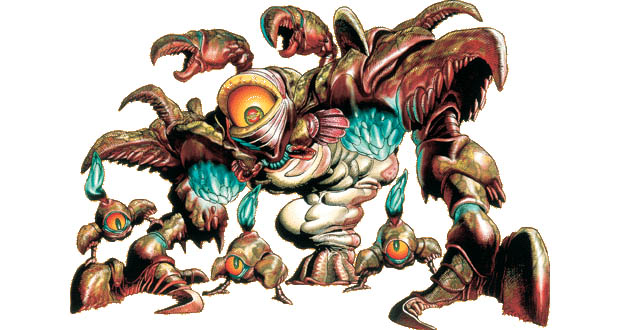 The fight with Gohma isn't particularily difficult or anything, but the monster herself is incredibly cool. This single battle sold me on the prospect of Zelda working out OK in 3D. To begin with, she has a dramatic, cinematic entrance that shows a classic series boss recreated brilliantly in polygons. Secondly, the fight is a great showcase of Zelda's Z-Targeting concept.

It seems all natural now, ten years after Ocarina, but at the time Z-Targeting was a revelation. You may recall other 3D games having no targeting (Shadowman) or auto targeting of varying quality (Tomb Raider?). These early targeting systems were one of the reasons 3D games felt "mushy" compared to their crisp 2D breathern. Remember effortlessly bopping off three consecutive Goombas in Super Mario Bros.?? Doing that in Mario 64, or even in Super Mario Galaxy, is nothing less than a herculean feat. Even jumping on the once-defenseless Goomba can be tricky in 3D. To combat this, effect Mario was given wide-area melee attacks, better suited to Mike Haggar than Captain Lou. Ocarina, however, let you concentrate on a single target by holding down the Z-Trigger on the underside of the control stick. (Thus "Z-Targeting," you see.) This is pretty cool for the random chumps you encounter in the dungeon, but when you reach Gohma you can use Z-Targeting to concentrate on her eye -- this is where Zelda's genius becomes evident.

Later in the game, Z-Targeting allows for exciting combat that rivaled any straight-up action game of the time. You could perform low and high attacks, not unlike the Dark Knuckle battles of Zelda II?. And Gohma's hardly the only rad boss; each dungeon has its own incredible boss encounter. 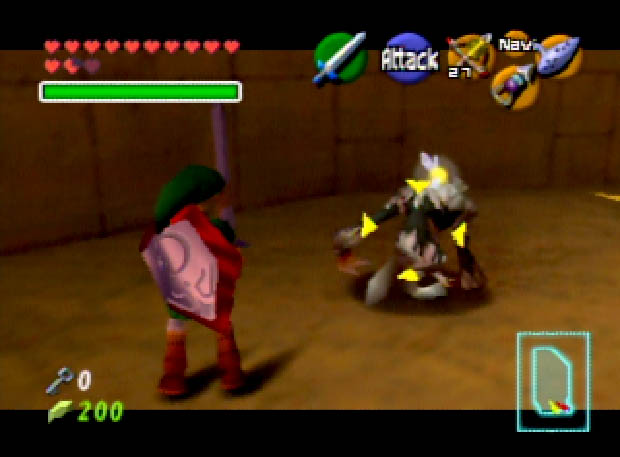 But targeting is hardly Ocarina's only notable innovation; the rest of the streamlined controls were equally incredible. You can perform most actions in the game by pressing the A button, and Link's behavior will vary according to the current context. This wasn't so much an innovation as it was keeping with tradition, but still felt fresh amidst the ever-increasing complexity of control schemes that 3D brought to gaming. Hitting A while running would make Link roll, but next to a pot A would make him lift the object; next to a ladder he'd climb. Link also had no jump command -- as in A Link to the Past he could leap from higher elevations, but he also gained the ability to jump to nearby platforms. Games like Gears of War? still use these contextualized controls to keep things flowing smoothly. In Ocarina, this cleared up the N64's C buttons for inventory usage, and if you've played a portable Zelda, you'll understand why having three active items is a big deal.

Beyond the confines of the Kokiri forest area, Ocarina offers newcomers a huge shock (especially in 1998) as the game opens into the expansive Hyrule Field. No invisible walls, no predefined path, just an enormous open world. Sure, it wasn't exactly Fallout 3? in scope, but this was a console game. On cartridge. Ten years ago. Despite Ocarina's other failings, that was the moment we all knew that this was what next-gen gaming was about. Final Fantasy VII may have had the three-disc experience, the slick renders, the inconsequential identity crisis story and all the cinemas, but Ocarina had substance. No chicanery, just the goods. To this day I haven't played through Final Fantasy VII two times. I tried again after the excitement of first seeing Advent Children (yeah, I dunno what I was thinking). I couldn't do it, eco-terrorism or no. The game just doesn't hold up. Not like Ocarina does.

Even with the game's shortcomings and my own bias against the N64 (or maybe because of it -- lowered expectations, you know), Ocarina was a winner. In my mind, it's still the definitive Zelda experience. Most games had a rocky transition to 3D, but Ocarina nailed it, preserving the series' innate "Zelda-ness" in the same way that Metroid Prime exudes "Metroid-ness." In a lot of ways, it's practically a 3D remake of A Link to the Past, the previous best game in the series. Above all, it's a 3D game that stays true to its roots and plays as a natural extension of its 2D forerunners rather than some bastardization made solely for the sake of being 3D (see Castlevania on 64 -- I like it, but still --, Contra: Legacy of War, or any Sonic game made in the last decade). It is very nearly the zenith of human creativity! Or at the very least, a completely amazing game.