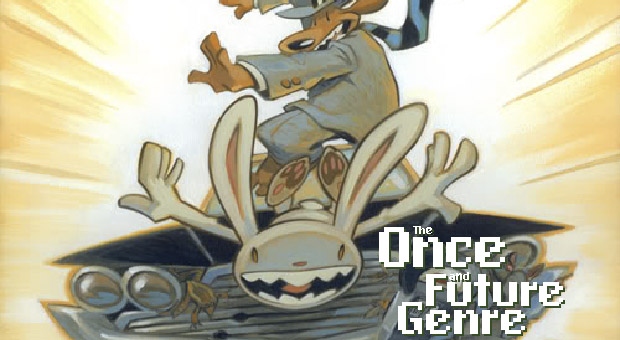 Games | The Once and Future Genre

In the late 80s and early 90s, the adventure game was king. Spearheaded largely by two companies, Sierra Entertainment and LucasArts, the PC became home to a roster of incredible point-and-click adventure titles that have engendered a curiously powerful sense of nostalgia in the hearts of the gamers that grew up with them. Chances are good that if you asked anyone to list his or her top 10 computer games from the 90s, said list would be chock full of names like Maniac Mansion, Kings Quest?, and Monkey Island... unless, of course, they owned a Mac, in which case the list would just say Marathon? ten times. Still, for those with a PC, adventure games were a contributing factor to that feeling of superiority over kids who simply had toys plugged into their televisions.

That is, until the year 2000 when LucasArts released what, in some alternate, hellish, Mad Max timeline, might have been the last adventure game ever made: Escape from Monkey Island?. Things were changing in this new millennium, and it seemed as though the adventure genre would not survive. PC gaming enjoyed a relatively strong year thanks to titles like Diablo II, Deus Ex and The Sims, but the industry-wide shift from beautiful, two-dimensional graphics to the flashy, whiz-bang world of janky 3D was well underway. A year prior, Sierra Entertainment released Gabriel Knight 3, but not much else in the way of traditional adventure gaming was in the pipeline... not to mention the fact that the company was busy trying to find the best way to be irrelevant. LucasArts, on the other hand, certainly had plans for sequels to the popular series Sam and Max and Full Throttle, but both projects were scrapped early in the decade in favor of whoring out the Star Wars license ad nauseam. The writing was on the wall, written in the blood of Ben Whatshisname by the hand of George Lucas: Adventure games were dead.

At this point, though, something interesting happened: Tim Schafer single-handedly saved a dying genre. Well, not really. But in 2000 he established Double Fine Productions, a new development team comprised largely of staff who had worked with him on one of the more beloved LucasArts adventure titles, Grim Fandango?. It would take them another five years, but in 2005 Double Fine released their first game for both PC and consoles. Psychonauts was not an adventure game in the traditional sense; in fact, it wasnt like that at all. It was much more akin to the Banjos and Kazooies that console gamers had been enjoying for years. Thats not to say that Psychonauts shared nothing in common with Tim Schafers previous titles, though. The game eschewed point-and-click mechanics, but underneath the platform-hopping collect-a-thon exterior lurked the story, humor, and charm that made the best adventure games such a joy to play.

Psychonauts was a critical darling, and for good reason. It was not without its faults, of course; like many games of its ilk, Psychonauts required players to collect all manner of tchochkaboos purely for the sake of collecting: always a laborious task. The controls suffered as well, particularly in the games final stage, which demanded a level of dexterity and hand-eye coordination not present in humans. Shortcomings aside, Psychonauts was almost universally lauded, and all seven people who purchased the game loved it immensely. In Psychonauts (and Double Fines latest game, Brütal Legend), the spirit of adventure gaming lived on.

Thats all well and good, but today adventure gaming is alive in more than just spirit. For that we can thank another group of LucasArts defectors, who left the company to carve out their own little slice of gaming goodness once LucasArts axed the in-progress sequel to Sam and Max. They called themselves Telltale Games, and they had a clear vision: They were going to make adventure games coated with the shiny, 3D paint of the future; they were going to make episodic, downloadable gaming a slick and profitable reality; and they were going to do it very, very well.

They did just that. In 2005 the company released its first foray into the episodic adventure game scene, Bone: Out from Boneville, based on Jeff Smiths graphic novel of the same name. It was the first application of Telltales new game engine, aptly named the Telltale Tool, which would go on to power all of their episodic content. While not initially a downloadable title, Out from Boneville was Telltales trial run. And though the Bone series languishes, incomplete, it paved the way for Telltales next project, the return of a fan favorite duo from the halcyon days of adventure gaming.

Sam and Max made their glorious return in October of 2006, initially as a limited exclusive to Turners fledgling video game subscription service Gametap followed by a direct download from the companys own website about a month later. This is where Telltales vision for the future of adevnture gaming was made apparent: Point-and-click movement, zany puzzles based on dubious pseudo-logic, and sharp, witty dialogue, each packaged in a game just long enough to be satisfying without wearing out its welcome.

That was almost four years ago. Since then, Telltale games has succeeded where many other have failed (looking at you here, Valve): Theyve made episodic gaming a viable business model. Telltale found the sweet spot. Each episode plays exactly like the natural evolution of the adventure genre should play, while giving you just enough adventure goodness to sate your appetite until the next episode comes along.

Since 2006, theyve published two five-episode seasons of Sam and Max, along with full seasons of other quirky IPs like including Homestar Runner, Wallace & Grommit, and what may well be the culmination of Telltales slick business model and immeasurable talent: Tales of Monkey Island.

Tales of Monkey Island is, in short, fantastic. And good thing, too; reviving a beloved series like Monkey Island was no doubt a daunting task. One wrong move, and the series fan base would have swarmed on Telltale like a school of piranhas on a three-headed monkey. Luckily, the team hit it out of the park. Tales mixes smart writing, excellent dialogue, and a quirky cast of characters both new and old while simultaneously applying the gameplay mechanics honed so sharply in their previous games. Unlike other seasons, each Tales episode is very much a part of a larger story, with each episode ending on a satisfying note that still leaves players wanting more.

With any luck, therell be more to come. Tales of Monkey Island has been Telltales most successful game yet, and Sam and Max will be returning for a third season sometime this year. A genre once on the brink of extinction has returned with full force, and while the PC elite can no longer lord the adventure genre over their console peers, thats hardly a bad thing. After a decade of uncertainty, the adventure genre is clearly here to stay.

Previous: The Mainstreaming of Mass Effect? | GameSpite Quarterly 4 | Next: The Neverhood: Quirk, Strangeness, and Charm