Games | Nintendo DS | The World Ends With You

Emo might just be the most overused word in contemporary usage. Point to anything that the average male in the all-important 18-34 age bracket demographic doesn't understand and they're liable to call it emo, despite not actually knowing that the term even means. Japanese games and anime are especially vulnerable to this label, simply because popular fashion trends in the land of anime tend to parallel the movement's presumptive norms. Since Square Enix's The World Ends With You is basically a playable embodiment of Japanese fashion, it's little surprise that the average American gamer wrote it off as a load of emo nonsense. It doesn't help that the headphones-wearing protagonist carries around a king-sized chip on his shoulder due to a grudge against the world and everyone in it; on the surface, it looked like a perfect storm of kids complaining about how unfair the world is while simultaneously listening to angsty J-pop.

And yet, anyone who has played TWEWY to it conclusion would tell you that its main themes are anything but emo. On the contrary, they are anti-emo. While emo culture is ridiculed for endlessly complaining about the world, then doing nothing about it, TWEWY appears to be aiming for that subset of disaffected Japanese teenagers who find themselves increasingly alienated from a rigid culture that heaps expectation and obligation on them from the day they're born. It seems to want desperately to be a generation's wake-up call, and in the process of offering a story heavily laden with messages and inspirational quotes, it clumsily stumbles into meaningfulness. Heavy-handed as it can be, though, TWEWY is a rarity in that it actually has a message. This theme is conveyed in every aspect of the game, from story to gameplay to music. 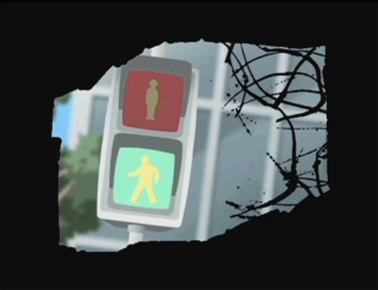 TWEWY also happens to sport some of the best graphics on the Nintendo DS, a system which has always been at its best when rendering colorful 2D sprites. TWEWY's striking visuals are reminiscent of the Sega classic Jet Grind Radio?, another game set in Tokyo's Shibuya district. The soundtrack contains a wide range of almost-popular Japanese vocals, creating an experience that quickly sets it apart from its nearest competition -- even on the more multimedia-capable PSP -- backed up by great attention to detail, strong story and interesting battle system. In short, despite niggling flaws (like a localization and fashion choices that will be laughably out of date in ten to fifteen years), TWEWY's impressive depth is all the easier to appreciate in its gleaming, impeccably-designed package.

The story opens at Shibuya's iconic scramble crossing, that huge multi-directional crosswalk near Hachiko Square which is typically what people photograph when they want to show off how crowded Tokyo really is. Designated protagonist Neku wakes to find that not only can he not remember anything, he can now read the minds of local passersby -- not exactly the most desirable power for a kid seemingly hellbent on being an introverted jerk. Paired by circumstance with an outgoing girl named Shiki, Neku discovers that he's trapped in a game that requires him to complete a variety of missions over the course of seven days, with the penalty for failure being erasure. (A jargony, video game way of saying "death.")

Amnesiac Neku initially makes it impossibly difficult for the player to like him. He's the one who earns TWEWY the majority of its presumptive emo designation in the early going. Yet unlike fellow cranky Square hero Squall, he's doesn't spend 99% of the game being a complete jerk before miraculously transforming into someone vaguely sociable for no real reason. Instead, his shift toward "likable" comes fairly quickly, and he even begins to trust his unwanted tagalong Shiki -- something of a necessity in a game in which you can't survive without your partner.

Trust and friendship are two of the most overdone themes in media, perhaps rivaling only "kill, blood, sex, guns" in terms of sheer popularity with writers. Sometimes, if they're feeling particularly creative, they'll even marry the two concepts, and we'll get a monologue about the value of trust and friendship following a particularly vicious blood bath.

TWEWY doesn't really venture beyond this territory, but somehow manages to make it work regardless. Perhaps this is because the writers actually seemed to put some thought into their approach to these themes, making them an intrinsic part of the game itself. A player can't fight the monsters scattered throughout the game without a partner to help out, and with erasure being relatively common in TWEWY, even self-centered Neku eventually has to get into the act or face oblivion. Nothing like hammering home life's little lessons with a flood of killer frogs. 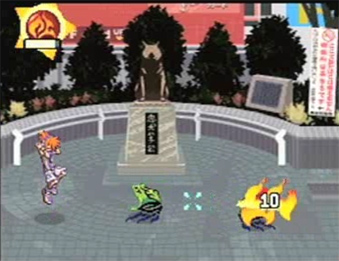 Now, here's where proponents of the "games as art" theory can see a glimmer of hope that gaming will one day be able to rise out of the media gutter that its been consigned to since its inception. (Sorry kids, it's not there yet, but we're working on it.) TWEWY manages to work its nascent themes into the gameplay, that elusive ingredient of interaction that manages to separate gaming from movies, television, book and music even at this early date.

TWEWY players have expressed varying degrees of like or hatred for the game's signature dual-screen battles. On the one hand, dividing your attention between two battles as you scribble with the stylus with one hand and use the d-pad to attack with the other can be incredibly frustrating. Some people never seem to get used to it, instead choosing to focus solely on Neku while leaving his partner in the hands of the computer.

In the meantime, better players will quickly master the art of hammering left or right on the d-pad while concentrating on the bottom screen. And if you're a real master, you'll not only be able to perform the matches required for a simultaneous strike, but you'll even be able to knock the green light puck back and forth between the two screens in exchange for attack bonuses. It's a system that seems daunting for beginners and veterans alike, but actually offers players as little or as much control over their characters as they wish. Those who are willing to make the effort to utilize the battle system to its full extent will reap great rewards in the form of increased drop rates for rare items, which alone is reason enough for the rabid completionists that tend to make up the RPG-playing population to master this aspect of the game.

"Trust" and "friendship" do not enter the picture here simply because you happen to be hammering that d-pad, though. Rather, as you fight alongside multiple partners on your way through the game -- each of whom has his or her own different control mechanics -- you'll quickly find that you work much better with some allies than others. By the end of a long, hard-fought week, you'll have battled alongside your partner in dozens of melees, defeated a few bosses, and...gone shopping together. (Please bear in mind that two of the three available partners are ostensibly male.)

But when each new week begins and you find yourself struggling to adapt to the presence of a new player, its easy to identify with Neku at his crankiest.

I want my old partner back!

But as time goes on, you'll adjust, and perhaps even come to like the new partner even more than the last. By the time you finish the game, all of your partners will be freely available. If Square Enix was aiming to hammer home TWEWY's theme of dependence on others through this mechanic, it's done an admirable job. As time goes on and games continue to mature, developers will hopefully continue to improve their ability to work their story themes into their gameplay. 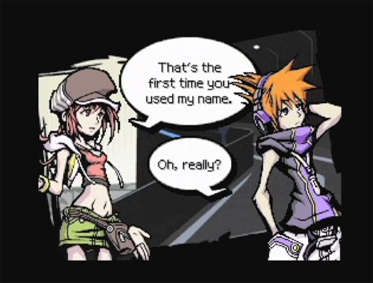 The world ends with you. If you want to enjoy life, expand your world. You gotta push your horizons out as far as they'll go.

Feeling inspired? You should be! It's no coincidence that Mr. Hanekoma, Neku's mentor and the game's spiritual center (not to mention a wicked pothead, by the looks of it) utters these words. They live at the heart of TWEWY's other pervasive theme: The need to stretch out, expand your horizons and become a better person. Naturally, you can't grow as a person unless you learn to rely on other people (though some might disagree), so the game's two core themes go hand-in-hand pretty nicely.

TWEWY's exploration of this theme is alternately eloquent and anviliciously heavy-handed. On the one hand, the idea that every character has to pay a fee to enter the game, with the fee being the thing they value most, proves to be an eloquent way for each of the players to grow as they realize just what they lost. After all, once you're forced to realize what is truly important in your life, you either build on it and grow or reprioritize and grow anyway. The other option, of course, is to shrug, turn on the television (or a video game) and remain static. But that's not what Tatsuya Kando and company want you to do!

As mentioned earlier, Kando and the gang seem to be aiming TWEWY squarely at that subsection of Japanese youth (many of whom happen to be gamers) who've just stopped giving a damn about pretty much anything. It asks the neets (those lovable Japanese shut-ins who sometimes literally don't come out of their room for years at a time) to reestablish human contact, and the young salarymen what they want to do with their life. These themes aren't necessarily incompatible with western youth, but most kids don't like being preached to, and that's unfortunately territory into which TWEWY occasionally ventures, particularly toward the end of the game. Just in case we missed the first ten hours of quotes that sound as if, as a certain Square villain once so gleefully put it, they "come from the pages of a self-help book," we're subjected to more (thankfully brief) monologues that do their best hammer home the point. And if we 'still'' don't get it then, it all ends up culminating in a montage so saccharine as to become sickly (which does happen to be the very anthithesis of everything that emo stands for, by the way).

Thanks Square. We get it. Inspiration and friends are important. And we appreciate your efforts to separate yourselves from the emo community. But, no really, we understand.

Sadly, these frequently hamfisted implementations of worthwhile themes tend to prove that, yes, games are still an immature medium. No game has managed to prove itself subtle enough that it can be dissected on multiple levels without the obvious themes beaning you in the face. And, yeah, that goes for critical darlings like Bioshock? and Metal Gear Solid 4 as well.

Yet there is hope to be found. The World Ends With You is the rare game that can stand up to more than a cursory examination of its core values, even managing to yield a fairly interesting critique of the destructive consumerism that many believe grips Japanese society today and for which Shibuya just happens to be a symbol. (If you'd like an example, just check out any running subplot involving the Prince.) In other words, there's just enough there to make you think even as you enjoy the outstanding graphics and well-designed gameplay. That alone is enough to recommend it over the great majority of games on the market today.