Games | Dreamcast? | Typing of the Dead: House of the Qwerty

The strange is often beautiful, and the beautiful sometimes quite strange. Faced with the unexpected, the observer must decide whether to reject it outright, or to allow their perspective to change until some facet of what they are seeing makes sense. Humans, curious creatures that they are, will more often than not opt for the latter. In doing so, they expose themselves to new ideas, changing the way they view the world on a deep, fundamental level.

Its like when you see a monkey on roller skates. Beautiful.

Few periods in the history of videogames were more beautifuland, by extension, strangethan the two-year lifespan of the Dreamcast. Segas little console that could played host to one of the most eclectic selections of games ever seen, mixing equal parts creativity, technology, and general wackiness. Leading the charge was Sega itself, who published some of the most colorful games in the Dreamcasts library. There was Jet Grind Radio, where hip-hop kids used futuristic rollerblades to rid the world of oppression through the power of graffiti. There was Shenmue, in which a robot karate man learns to love by driving a forklift and playing Space Harrier. There was Seaman, wherewell, to be honest, Im not sure anyone really knows what the hell Seaman was about.

Still, it was a period of unmatched creativity, when crazy software met with some of the most gratuitous console accessories since the U-Force. Microphones and maracas and VMUs as far as the eye could see! And if there was any room left in your closet, you could always equip yourself with a couple of fishing controllers and a Virtual-On Twin Stick or two. In the face of this off-white, plastic madness, the Dreamcast keyboard actually came across as a fairly reasonable accessory by comparison. Perfect for using the consoles built-in web browser or sending messages to other Phantasy Star Online players. Hell, you could even use it to get your WASD on while playing Quake III online!

But for all of these reasonable uses, the Dreamcast keyboard wouldnt find its true calling until the magical day that someone decided to take Segas blockbuster light gun shooter The House of the Dead 2 and replace all of the guns in it with keyboards. It was a simple one-for-one substitution: Instead of aiming for the head and pulling the trigger, the player was tasked with typing phrases emblazoned on the chests of the hungry undead before they could get close enough to take a bite. Start them out with acronyms and four letter words on level one and gradually scale up to short sentences comprised of six-syllable monsters by the time the game wraps up. 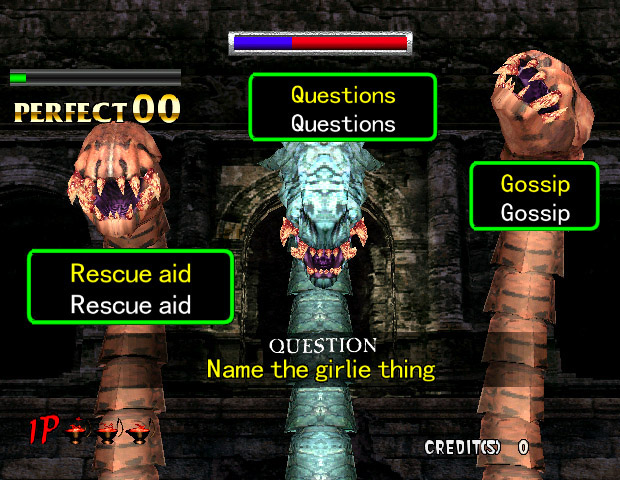 It was a pretty gutsy move on Segas part, all things considered; one could argue that a light gun shooter without a gun doesnt have a whole lot going for it. The genre is incredibly simplistic at its base level, and only through the visceral nature of the gun peripheral do these games manage to hold the players interest for the 30 minutes or so it takes to play one. So what do you get if you take a highly-evolved descendant of Hogans Alley and genetically splice it with Mavis Beacon Teaches Typing? Logically, the whole thing should be a total trainwreck.

Fortunately, logic has no place in The Typing of the Dead.

Thats not hyperbole, either, as Typing is one of the most nonsensical games ever madeand from this nonsense does it draw its strength. Since you cant make a serious game about typing zombies to death, Smilebit and Sega did the only logical thing: Make a completely ridiculous game about typing zombies to death. And while the concept of zombies popping up with cue cards in front of them is pretty silly to begin with, the actual content on those cards pushes the whole experience into the realms of the sublime. The lexicon in Typing is filled with geeky in-jokes, tongue twisters and unusual place names. Common expressions seem eerily out of place as they rush toward you full of violent intent. The chainsaw-wielding boss of the fourth stage forces you to type out a full paragraph homage to Knuckles the Echidna in the form of a poem. And its all layered on top of the extant general goofiness of the original House of the Dead 2, which combined a nonsensical plot with some of the most wooden and contextually-inappropriate voice acting ever seen in a videogame. 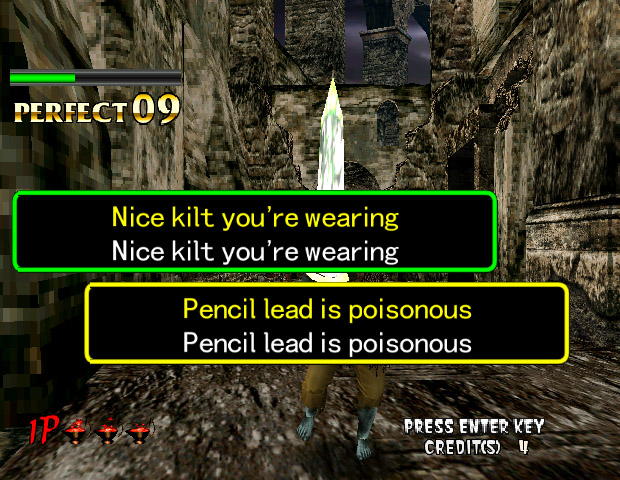 As a result, The Typing of the Dead is one of the funniest videogames ever made, up there with the likes of Psychonauts and Star Control 2. Part of that comes from the numerous visual tweaks that were made to the game: The agents sport giant Dreamcast backpacks with keyboards strapped to them as they face down zombies wielding lollipops and squeaky mallets. But the sight-gags are handily eclipsed by the natural humor of the lexicon in the game, combined with the serious settings and events. Its hard not to laugh as you find yourself frantically trying to spell Ulysses S. Grant while a hostile zombie bears down on you. A thrown axe or a small flying enemy may only require one keystroke to take down, but when a late-game zombie tosses a knife at you that requires the split-second location of the semicolon key on your keyboard, the absurdity of the situation is eclipsed only by the adrenaline rush.

And make no mistake, there is adrenaline aplenty to be had over the course of the game. Because, despite its silly appearance, Typing is actually a really fun gamea good deal more fun, in fact, than the light-gun shooter that inspired it. The typing mechanics are as satisfying as they are unconventional. Nailing a series of tough phrases without any typos is hugely satisfying, and those moments when you just cant find the damn apostrophe are extremely tense. Its quite challenging, as well; anyone who doesnt spend their day taking dictation will probably struggle with some of the more unusual words and phrases. Typing is the only game that dares to ask, How quickly can you spell the word hydrangea? 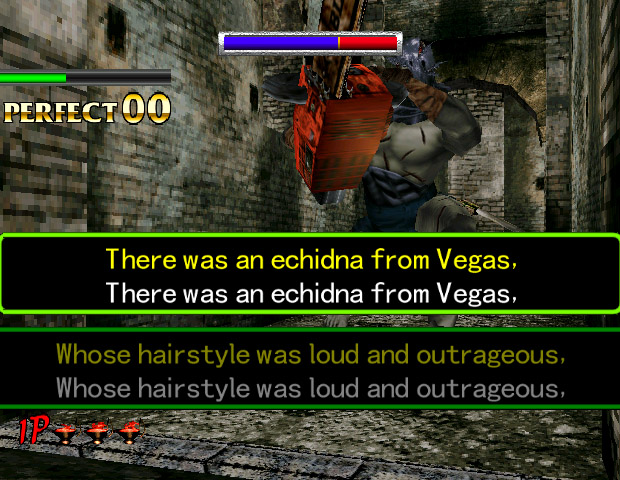 Typing also manages to avoid one of the biggest pitfalls of the on-rails shooter genre: Predictability. In a regular shooter, foreknowledge of the locations where monsters appear can make parts of the game a total cakewalk. In Typing, the player might know to expect a zombie as they turn the corner, but the phrase it will be wearing is different every time. Theres a world of difference between vermiculation and hymnboree.

Its true, of course, that one of the greatest strengths of Typing is its uniqueness. Much like Katamari Damacy would be a few years later, The Typing of the Dead is best appreciated as a game apart, and endless sequels would only rob it of its magic. That said, the concept at work is so great that it seems criminally underexploited. While Japanese arcades saw a similar conversion of House of the Dead 3, the West only ever saw the first installment of the series, and even that game hasnt been in print for nearly a decade. One of the great sadnesses of the modern console generation is that we have yet to see a port of this game to either the PS3 or the 360both of which support a variety of keyboards.

Alas, such is to be our fate for the foreseeable future. It would seem that Typing was a game simply too beautiful for this worldor maybe just too strange. In the meantime, the best we can do is eBay a Dreamcast keyboard, warm up our fingers and prepare to face the restless dead. And if we all learn something in the process, mores the better.