Article by RedHedgehog | December 14, 2007 | One of three NES MacVenture Ports

People tend to have few fond memories of the NES game Uninvited. Its late release -- 1991, right as the NES entered its post-Super NES freefall and 8-bit games were overlooked in favor of shiny Mode 7 effects -- is probably the biggest reason for this. Yet even those who've played it don't have much to say about it. It isn't a bad game, in that it's logically coherent and its puzzles make sense. However, it's lacking the spark that gave both Déjà Vu and (to a lesser degree) Shadowgate their charm.

Uninvited takes place in a haunted mansion. You awaken from a car crash to find your little sister is gone. (Curiously, in the original Mac version, your little brother was missing, and no good reason for the sex change has ever been offered.) Logically, you assume she must have gone into the nearby mansion to ask for help and head inside in the hopes of finding her. But once in the mansion, you experience a mix of ghosts, demons, magic, and the undead as you uncover a tense battle between a master warlock and his treacherous student who hopes to gain ultimate power.

Or at least that's what the developers intended. The truth is, it doesn't quite work out that way.

That premise seems like it could make for a good adventure game, but it doesn't because, ultimately, the game doesn't quite succeed in pulling you into it. Unlike Déjà Vu, you are not directly involved in the story. Sure, you stumble upon this struggle and even end up playing a major role in it, but for the most part you simply come off as an outsider -- an observer to someone else's story. That is the crux of Uninvited's plot issues. You learn about the situation and the game's events only indirectly, mostly through diary entries and notes, rather than actually experiencing it directly. It feels like you've stepped into the world of the two dueling wizards frozen in time -- and indeed, the plot eventually reveals that this impression isn't too far from the truth.

Shadowgate managed to be charming despite its lack of plot because the characters and setting of the castle in which the adventure was set were a lot of fun. Uninvited, though, fails even at having an interesting setting. In fact, you might not even realize the house was haunted if not for the text stating this is the case. Encounters with ghouls and ghosts are so infrequent that the house simply feels empty. This gives the game a sense of loneliness rather than one of danger. Uninvited, back in original black-and-white on the Macintosh, managed provide genuine creepiness. In the transition to the NES, with its truncated, censored dialogue and bright pastel colors, the only spooky element is the music.

Perhaps Uninvited's writers realized this, as it seems they attempted to add some humor to increase the game's charm. It works occasionally, but only if you enjoy puns and references to other media. This includes other MacVenture games. (The record player that plays the main theme from Shadowgate is a particularly nice touch.) 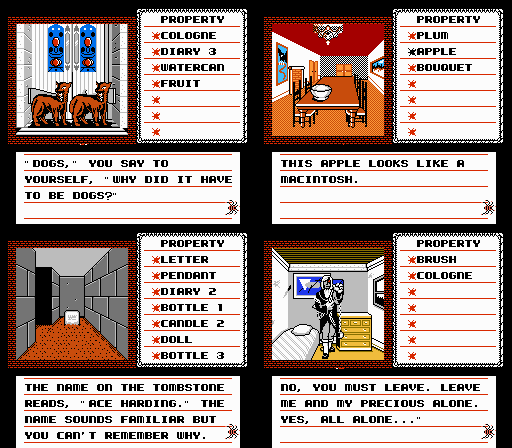 Uninvited does at least maintain the (mostly) logical puzzles of its predecessor Déjà Vu. In fact, much as in Déjà Vu, observation is the key to solving the puzzles. Yet it lacks even in this regard, absent the detective work and piecing together of disparate elements that Déjà Vu had -- even Shadowgate featured a bit of detective work in its quest for the special items that could defeat the warlock lord. Here, the puzzles instead follow a dull formula: you examine object A, get a clue to solving puzzle B, which then lets you move on to the next room where you encounter puzzle D whose secret rests in object C. Sometimes, the game will beat you over the head with a puzzle solution, while at other times the answers show a touch of the inscrutability that was in abundance in Shadowgate. 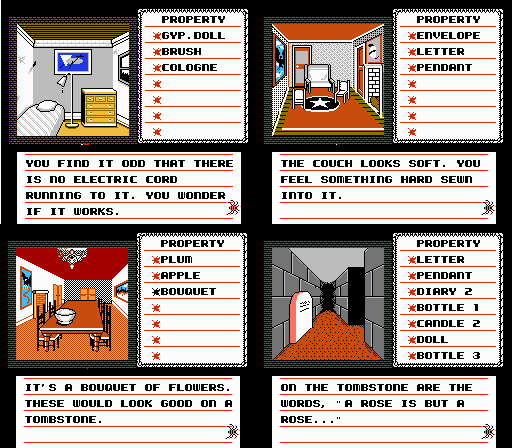 Yes, it really is this obvious what you need to do with the flowers.

One thing that Uninvited lacks is random deaths. You will certainly die at times, and you may die because you use the wrong item in a puzzle involving a nasty monster, but you will never die "just because." In the one instance where you can walk into a room and immediately die, the game offers several warnings in advance.

Of course, because of this, the ruby that slowly kills you is all the more frustrating.

In the original version of Uninvited, you were given a finite amount of time in which to explore the house and find your missing sibling. Each action you performed allowed the evil spirits of the house to come a little closer to taking possession of your soul. Periodically, you'd receive messages to this effect.

While these ominous warnings made the game creepier, the time limit frustrated many gamers, and the developers wisely removed it for the NES port. Unfortunately, they decided to retain the effect and transplant it into a ruby that you can pick up. There is no warning that the ruby will do bad things to you, though, and even once you have the ruby, you're never given any indication that it is causing the takeover of your mind. This is easily the most significant flaw in the NES version of Uninvited.

On the positive side of the ledger, Uninvited introduced the concept of spells as special inventory items that would show up later in Shadowgate. Since this game was developed earlier than Shadowgate, the spells demonstrate all the problems they had in the later game -- each spell is only useful in one specific place in the game, making the spells' distinction from regular inventory items ultimately unnecessary. Additionally, a couple of spells are not obvious in their application, an unfortunate precursor to Shadowgate's many unintuitive puzzle solutions. 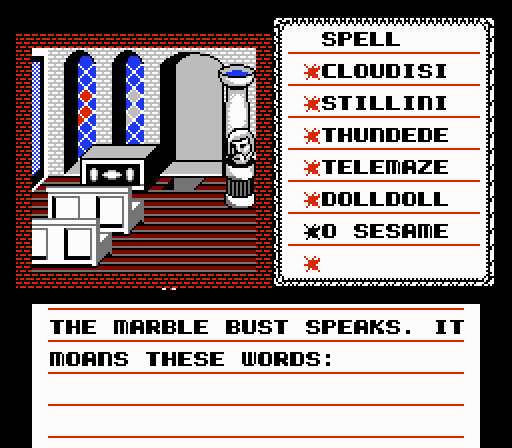 One other feature that bears mentioning is that Uninvited contains a common staple (some might say cliché) of adventure games: the maze. Since this is a graphic adventure, the maze isn't quite a series of twisty little passages, all alike, but rather has more in common with the first person views of early dungeon crawlers. It isn't quite big enough that you need to pull out the graph paper to handle, and it doesn't offer any serious threats or levy stern consequences for going the wrong way. Instead, it's simply a nice change of pace from the puzzles in the remainder of the game.

Uninvited serves mostly as a step on the evolutionary ladder (if you can call it evolution) between Déjà Vu and Shadowgate. The puzzles are mostly in the vein of the former yet offer hints of what is to come in the latter. The story already foretells Shadowgate's style by making your avatar almost wholly unimportant, yet it manages to maintain at least a little of Déjà Vu's appeal by putting moderate effort into explaining the game world.

By and large, though, the game is forgettable. The adventure portion is competent enough to appeal to those who like the "examine everything and use item A on item B" approach to the genre. But without compelling writing, the experience is ultimately unfulfilling. Which probably accounts for why Uninvited is the forgotten member of the NES' MacVenture trio.