Shooters are kinda not very much fun anymore. Back in the day, shooters were still exceedingly difficult, sure, but they were very much about sitting down and having fun. This is precisely why the NES versions of Contra? and Super C? are considered classics while their erstwhile arcade versions (Contra? and Super Contra? respectively) are curiosities at best. The NES Contras -- Contra Force notwithstanding -- were great, pick-up-and-play fun for either one or two players. Sure, it helped to know where the safe spots were, but memorization wasn't absolutely mandatory. The FAQ for the game goes like this: Get Spread, then Rapid. You win!

Modern Contras, on the other hand, require zen-like concentration to get anywhere -- see Shattered Soldier? for all the proof you could ever need. Now, you can no longer pop in a shooter and fly by the seat of your pants; no, completing a modern shooter requires the dedication usually reserved for maxing out a few parties of Level 75 characters in Final Fantasy XI?.

And it's not like side-scrolling shooters have a lock on this rule, either; the same holds true for top-down shoot-em-ups as well. Ikaruga? is regarded as an absolute classic in many circles, and the game's brilliance is undeniable; your ship changes its polarities making it immune to one range of fire and its attacks stronger against the other colour variety of enemies (white or black). There are no power-ups, no cheating your way out of a situation with bombs or other such nonsense. You need to know the right place to be at the right time, and the only way to do that is practice. But there's just one small problem: it's not really what you'd call fun.

But Blazing Lazers? Extremely fun, incredibly accessible -- especially in light of the chthonic knowledge required to play Ikaruga or, say, any shooter published during the Dreamcast's afterlife. This isn't to say Blazing Lazers isn't difficult -- it is. But compared to today's exercises in twitch memorization, it is immensely more gratifying. 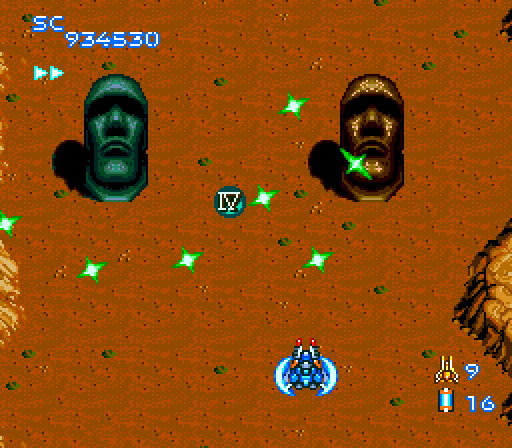 Moai Heads made possible through generous contributions
from Gofer -- and viewers like you!

Blazing Lazers was the creation of Compile, a storied developer known for its great many (and just plain great) shooters. Whether creating straight shooters (i.e. Zanac, Space Megaforce/Super Aleste), Zelda-esque adventures (Golvellius) or hybrid shooters/Zelda-esque adventures (The Guardian Legend?), Compile was synonymous with quality. (They're also responsible for the Puyo Puyo series, but let's not dwell on that.) Blazing Lazers is no different.

Loosely based on of a Japanese live-action giant robot movie called Gunhed -- the game's Japanese title -- Blazing Lazers takes a few liberties with its source material. It's short on transformations, but long on shooting robots, and that is all that matters.

Most Compile shooters feature a similar power-up system, and it worked so well that Hudson even swiped it for Super Star Soldier. Blazing Lazers is true to type: You may choose from four different primary weapon types, each of which can each be powered up through six levels. The various weapons have specific tactical advantages, such as the Ring Blaster, which at higher levels circles the player's ship and deflects many enemies and projectiles -- practically a requirement in bullet hell stages like level five. The drawback, of course, is that the Ring Blaster reduces the ship's direct armament to a trifling pea shooter. Learning how and when to use each weapon is part of the game's strategy -- although it's never so specific that you're forced to use anything at any time. 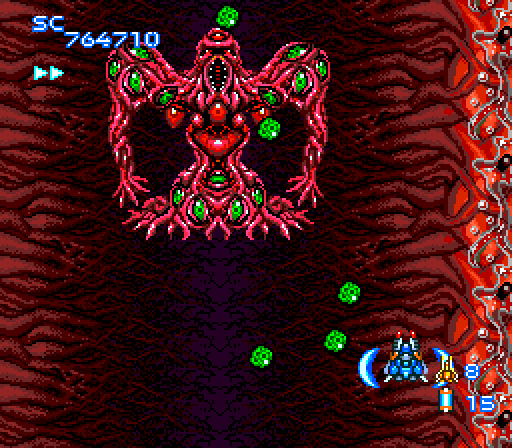 In space, no one can hear you retch in disgust.

In addition to increasing your ability to stomp nondescript alien ass, upgrading your primary weapons also gives you a force field that can soak up a couple of hits -- although being hit will still downgrade your current weapon. Secondary weapons include shields, homing missiles, special attack effects based on yoru current primary weapon, and Multibody (read: total rip-offs of Gradius? Options). Also, collecting several of the same secondary weapon type will yield more bombs. Your primary weapon can be upgraded by picking up the orbs with the corresponding Roman numerals, or by collecting purple orbs dropped by enemies. Some power-up orbs will cycle through different types until collected, though this can be paused by shooting at them -- and if you fire at them long enough, they'll begin flashing. Collect a flashing orb and you'll inflict damage to all enemies and bullets on screen and even respawn instantly the next time you die rather than reappearing back at a checkpoint. Best of all: This effect stacks.

Of course, older games may be more fun than something like Ikaruga, but they generally share a fatal flaw -- and Blazing Lazers is no different. When you die late in the game, you'll be reduced to your starting abilities. Should you die in the final level, God help you to survive, because your reflexes alone probably won't do it. Ikaruga and Shattered Soldier may be tedious memory exercises, but they feature no power-ups, so no matter when you die you'll always be set to tackle the final areas. 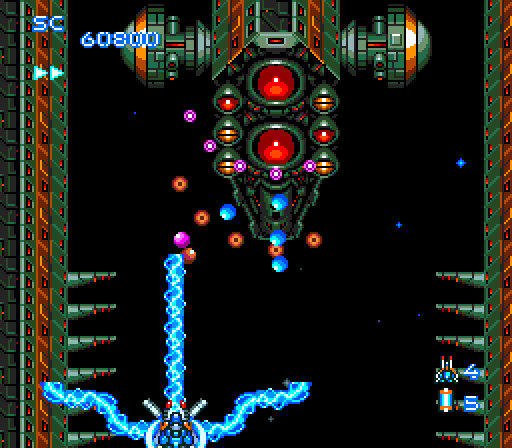 Aside from offering lots of varying power ups, being a blast to play, and having origins in obscure Japanese cinema, Blazing Lazers featured incredible graphics for its time -- visuals that stand out even today and remain amongst the best seen on the TurboGrafx-16?. Lots of bright vivid colours and well-drawn sprites featuring plenty of detail. The bosses in particular are quite impressive, often filling the screen. Some are built of multiple sprites and present cool visual effects and interesting hit areas. The music is equally stellar, with many standout tunes and unique tracks for most of the bosses. The Virtual Console emulation is unfortunately not perfect, and you'll probably notice some glitches here and there. Most noticeably, the ground structures briefly warp colours in the middle of stage three. This doesn't affect the gameplay, but Virtual Console's shoddy TG16 emulation continues to disappoint -- especially considering how well other platforms are represented.

Approximately forty billion shooters are available on VC, and a great many of them are TG16 titles. So you might wonder why you'd want to download Blazing Lazers over its myriad competitors. That's simple enough: If you compare Blazing Lazers versus these other games -- particularly against the other top-down shooters -- the quality will be clear. Super Star Soldier never quite shakes off the impression that you it's an extremely watered-down Blazing Lazers. The power-up system is nearly identical, but the play seems off and the graphics are bland. One is coarse and base; the other is refined and delectable. Sure, we all like to sit down and eat some fish sticks every once in a while -- but given the opportunity wouldn't you prefer a fresh grilled scallop the size of your fist, garnished with mushroom ravioli, truffles, and a mushroom reduction tea, all prepared with the finest French (er, freedom) ingredients? Now assume both these options could each be had for 600 Wii points and not the difference of hundreds of dollars. Unless you are insane, or simply have terrible taste, the choice is clear. Even Blazing Lazers' own spiritual successor, Space Megaforce, pales in comparison -- despite running on superior hardware, sporting fancy Mode 7 chicanery, boasting twice as many weapons, and offering more stages. 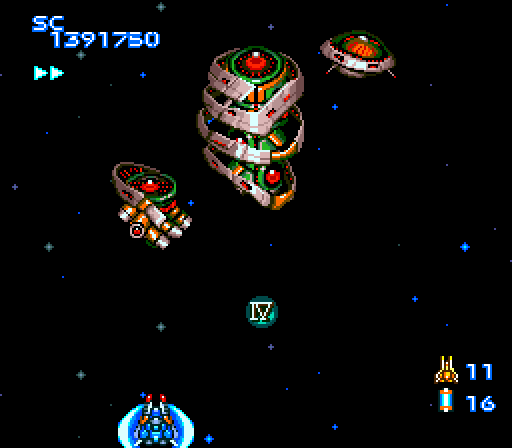 So is Blazing Lazers brilliant or simply the beneficiary of blind nostalgia? Man, who even knows. But for 600 meager Wii points you can find out for yourself.

Besides, keep to that all-fish-stick diet and your body mass is gonna be like forty percent tapeworms. Mmmm. Bon appétit.