While many have praised World of Warcraft for its sweeping success in opening MMOs to a wide audience, there are those that are dismayed at the crystallizing effect its had upon the genre. Where the major pre-WoW MMOs had widely different ways of handling combat, questing, player interactions and economy, the unparalleled success of the World of Warcraft formula has essential transformed the genre into little more than a selection of differently skinned WoW clones. To see real variation in play and function, the bored player must dig into the untested world of less mainstream games. Distributed online and more often than not either run out of a basement or from startup in Korea, many of these games seem to exist in a never-ending limbo of beta testing. Still, the occasional gem is out there, and sometimes its worth enduring a few misfires to experience something new.

At least, that was my line of thinking when I first ran across a description for WURM Online, a game that billed itself as more of a fantasy world simulator than a standard role-playing game. With WURM, gone were the pre-generated, unchanging cities of NPCs. Gone was the idea of nicely packaged quests for experience and loot. Gone was, in essence, everything that practically defined the current generation of MMORPGs. The description I found online promised a world and civilization entirely built by player hands. Untamed wilderness stretched in every direction, and what cities and civilizations dotted the rugged landscape were built and maintained by devoted players, trying to scratch out a virtual living. Characters had to prepare food to eat and find water to drink, along with a variety of other realistic tasks generally not included in other games. This was a game that really strove to break the World of Warcraft mold. To say I was intrigued does little justice to the excitement I felt after learning of the game.

I decided to try the game with a friend, taking my laptop to his apartment and jumping in to play co-op. We would tackle this new frontier together, a much lauded Wiki open to guide us through our first steps into WURM. During our registration process, we discovered that WURM is something of a work in progress, with rough edges all around. A completely threadbare character creation process offers only the choice between male and female avatars, with no further customization. We were undaunted however, knowing that the genius of great game design will shine through lacking visuals. 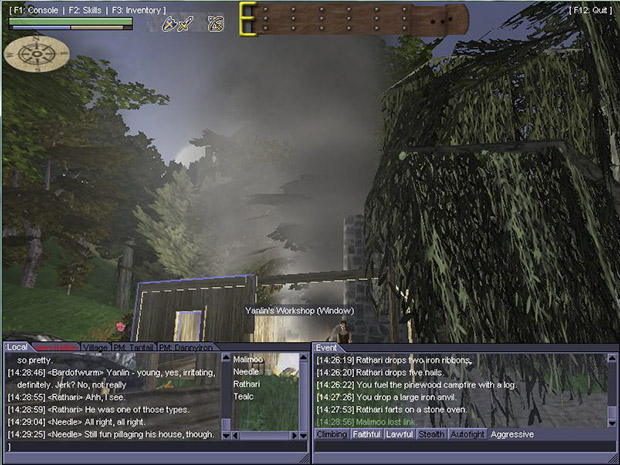 We first logged into WURM almost immediately after a server reset -- when the world of WURM had, for one reason or another, been wiped of all its player-built cities, roads, and fortresses, returning it to a pristine wilderness. We started in a partially cleared field near some water, a rare NPC standing nearby, distributing rations to noobs. This was the humble beginnings of Newtown, now a sprawling metropolis by WURM standards. Here and there a player worked at cutting down a tree, building a fire, or perhaps digging a mine. We tried to get our bearings, but the game featured no in-game map, and our characters didnt possess a compass. In a way, this was exciting after becoming used to navigation by mini-maps and waypoints, but we would have to be very careful not to get separated. We took our first tentative look around.

Next to the water we found a mine someone had dug, untended by its owner. We crept inside and discovered a pile of iron ore, which the Wiki told us was an important material for crafting weapons, armor, and perhaps more importantly, nails and anvils for creating buildings. Our baser instincts, bolstered by the lack of security, led us to load up our inventory with pilfered iron, sneaking back out of the mine and working our way along the waters edge. Though initially happy with ourselves, it wasnt long until we found the extreme weight of the iron encumbered our characters so much that our stamina was dropping quickly and our movement speed was crippled. We knew we had to dump the ore if we wanted to continue, but we were still in sight of the mine we had stolen it from. If we dumped the iron here, it would be easily found and recovered. However, I had an idea. Swimming out into the water, we dropped the iron, which sank to sit at the bottom of the lake. Surely no one would find it there! We were proud of ourselves -- we had hidden a cache of iron for later, when we would surely need it to craft any number of things. We were still enjoying the freedom of it all, of being untethered in a simulation sandbox rather than an arcade-like RPG.

Checking the Wiki, we discovered that our first task should be to find a clay deposit with which to craft our first crude eating utensils. We sat out to do just that, perhaps not being quite as careful as we should have been. Because of our hubris, the unthinkable happened and we found ourselves separated. Though sitting in the same room as my friend, I simply could not find him in game. He was gone from the list of players in my local area and I could not find a landmark to get myself back the way we had came. I climbed a hill to try and get a better vantage point, but found nothing but woods and mountains and water. With freedom comes the opportunity for disappointment, and I was suddenly feeling just that.

Following what I thought was the correct path, I swam across a large body of water, not another character showing up in the local chat. I wandered across fields and hills for literally hours, completely lost and alone. At one point, I saw smoke on the horizon and ran to it, hoping to find someone to point me at least in the direction of Newtown. Two players milled about a small outpost, and were obviously surprised to see me this far out. I asked them if they knew the way back to Newtown. They said they did not. I went on my way. 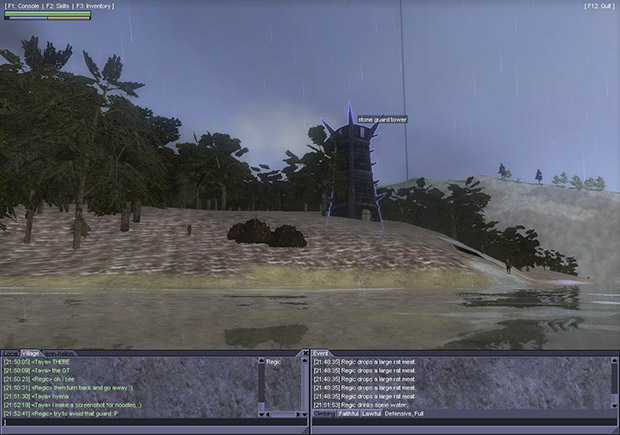 Eventually, I was able to meet back up with my friend, but my excitement for the game had been dashed in the process. My character was hungry and low on stamina, but we did manage to find some clay to make a bowl and pitcher from. He dug the raw material and I built the fire to bake the goods, and shortly we were each the owners of our first two crafted items. Knowing we had to eat, but realizing the NPC with rations back in Newtown was far too far away to consider trying to get to, we foraged in the grass for food. Using our untested cooking skills, we each made a casserole from our found ingredients, putting them in the bowl and then back in the fire to cook. We tried to mine for a while after that, but our characters were so fatigued that we were unable to make a single bit of progress. Finally, with no ceremony, we wandered back to the fire, hoping for our food to be done. His was not, but mine was. I tried to eat it. It was too hot. I logged out.

That was it between WURM and me.

Somehow, though, my friend was undeterred from trying to enjoy the game. He convinced a couple of other friends to play, and they started a rather successful city, each day spending untold hours planting and tending crops, digging mines, and smithing nails. From time to time, Id ask him to show me around what he had accomplished, and in a way I was kind of impressed. Sometimes I felt the urge to give it another go, but I knew my own disappointment with the game wouldnt let me.

WURM Online is an excellent example of theory outweighing practice; the world it creates is impressive for its depth and adherence to reality, but perhaps so much so that the tedium of actual life obliterates much of the chance for people to enjoy it as a game. While it commands a few dedicated fans, WURM goes largely unnoticed by the population at large. While I no longer play the game, I do admire WURM from a distance, much like an animal in a zoo: A rare and beautiful thing, but ultimately too wild and dangerous to bring home.

Previous: Mario & Luigi: The Inside Scoop on Bowser | GameSpite Quarterly 4 | Next: Mass Effect 2: The Mainstreaming of Mass Effect