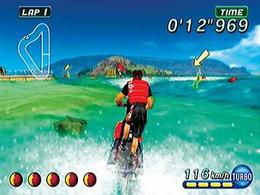 Blue Storm was the third (and as of yet, final) installment of the Wave Race series that began on the Game Boy and continued on the Nintendo 64. It's also a part of the quasi-series that includes the 1080° games, with which it shares characters and developer histories -- both were helmed by EAD on the N64 before being handed to NST on the GameCube. 1080° Avalanche was even initially titled "1080° White Storm" before someone actually said it out loud. Thankfully Excitebike? never saw an entry during the GameCube era, otherwise we would have been burdened with the possibility of an "Excitebike: Brown Storm."

The series is a member of the jet-ski racer sub-sub-genre -- personal water craft racer if you must -- that was popular in the '90s and probably won't be making a comeback anytime soon. Blue Storm doesn't rock the personal water craft, so to speak, never straying far from Wave Race 64?'s template. You could even consider the game a remake of sorts. Most of the courses have an analog from the 64 game; and really, how different can you make a jet-ski racer? Wave Race 64 was a well-received game, though, and with Blue Storm Nintendo was banking on the timing of its release more than anything else.

Blue Storm feels unabashedly like a launch title, one of those games that exists to sell you the system that debuts alongside it. Sometimes console manufacturers get lucky and end up with an A-list blockbuster like Halo or Super Mario 64, but more often launches are accompanied by a bevy of games with little purpose beyond showing off all the bells and whistles provided by this latest upgrade in hardware power. Usually, they offers some sort of gimmick to help differentiate themselves from the limitations of the previous generation. On the GameCube, for example, Pikmin showcased the hardware's ability to handle multiple characters at once while Luigi's Mansion included a bunch of nifty particle and lighting effects. Blue Storm's gimmick was its water physics. 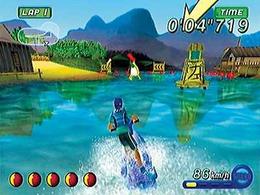 They're pretty good water physics, mind you, and considering the genre at hand it wasn't exactly an empty or gratuitous addition. The physics were accentuated by the game's weather system, where conditions ranged from sunny skies to typhoon, affecting the courses' conditions accordingly. Theoretically, this turned the game's eight courses into nearly 100 different permutations, but really there's only so much difference between "rainy" and "partly rainy." There is a strategic element to the weather system, however, as a forecast is provided when you begin a Grand Prix. Since you pick the order of the courses you take into account which courses work best in different kinds of weather. Usually you'll just race the easier courses during the rough conditions, but some tracks have obstacles that get covered up by rising water levels. The difference wrought by the weather may not live up to the press releases, but Aspen Lake on a clear day and Aspen Lake during a storm have to be approached quite differently.

Anyway, the stormy conditions are really when the game's at its best. Launching off 15-foot waves and plunging beneath the surface upon landing provides the game's biggest thrills. Choppy conditions require a steady hand to navigate the course, making the experience that much more rewarding.

All of this is held together by the game's main gameplay conceit, the turbo system. For every five buoys passed or trick performed, a bar fills up on the bottom of the screen. Once filled, your boat operates at a slightly higher top speed until you activate a turbo boost, which then depletes the bar. It's a pleasantly simple system that can be used a number of ways. Using the turbo on straightaways where it's quickly filled up is an obvious tactic, but there are other options as well. Simply maintaining your slightly higher speed is often the best course of action, and boosts can be used for shortcuts that bypass buoys, if you feel you can spare a few of your maximum five buoys you can miss per race. Plus, the shortcuts give you a legitimate reason to perform tricks. 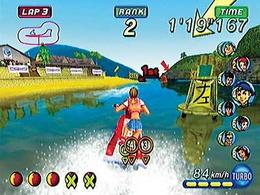 Sounds fun, right? But we haven't gotten to the element that makes my love for Blue Storm such a rarity. The reason why it's a forgotten launch title as opposed to a fan-favorite: the controls.

It's not that the controls are bad, it's simply they're the fussiest things on the face of the earth. There is no good reason to ever get good at Wave Race: Blue Storm, because no one else has the patience to do the same. Some of this has to do with NST getting drunk with the possibilities presented by analog shoulder buttons. Not only will the shoulder triggers register the minutest of differences in pressure, but they're only one part of how you input turns. The game takes into account how far you've depressed the triggers, how far you've pushed the analog stick to the side, as well as how long you've pulled the analog stick back. It all makes for countless degrees of how sharply you can turn, and mastering their full range is required to navigate the courses.

It's a classic case of giving the player too much control. Sure, players have a deep, responsive method for controlling their water craft, but no one's going to stick around long enough to take advantage of it. Most players veer around wildly when playing for the first time, unaware of the subtle movements required to steer your jet-ski. Most give up after a few races, and I can't really blame them. Blue Storm is fun game, but I don't think most would think it's that fun. 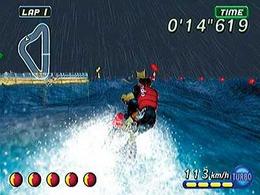 Me, I ate it up. Call it bull-headed determination, call it a lack of competing quality software, but I managed to master the mechanics. It wasn't easy. The racer AI is brutal at the higher difficulties, and playing catch up is never easy with the racers ahead of you producing wakes. But it was all for nothing. Every time I invited someone else to play, they were turned off immediately by the steep learning curve. I may have been having a blast, but they couldn't get over the fact that their jet-ski pulled a 130° turn at the slightest provocation.

There are a few other shortcomings that drove people away. Blue Storm is infused with that patented NST visual blandness that sidesteps major design flaws but otherwise brings little to the table. And while I personally appreciate guys with affected British accents informing me that my boat is now turbocharged I can see how that might get grating after a while.

But that doesn't matter. I'll still have Blue Race, and once we reach that Krahulikian future where we have unlimited opponents who share our tastes and dedication to insignificant racing games from the early 2000s, that will have to be enough.

Images kidnapped from Eurogamer, thrown into a van, and driven miles out into the country before being forced to read manifestos to be broadcast on the Internet.