Persepolis finally opened in San Francisco this weekend, which actually managed to rouse me from my general apathy toward all things cinematic -- I've seen a fair number of movies in the past couple of months, but mainly as an excuse to get out and do something. Sure, Juno is enjoyable as a clever bit of writing, and Cloverfield was an interesting gimmick, but this was a movie I genuinely couldn't wait to see. Happily, it did not disappoint.

Of course, I am a sucker for good animation, and Persepolis is a beautifully-realized adaptation of the original graphics novel -- which, of unfortunately, I've only read scattered fragments. But in terms of visual style alone, I'd say it's probably the most faithful page-to-screen conversion since MTV aired Sam Keith's The Maxx. Unlike The Maxx, which was brilliant but achieved a lot of its fidelity with low budget cheating, Persepolis moves fluidly and manages to imbue Marjane Satrapi's clean, simple line illustrations with expressive motion and effective emotion. Color is used sparingly as a framing device, lending the whole thing a sort of historical documentary quality. Which, in a sense, it is. 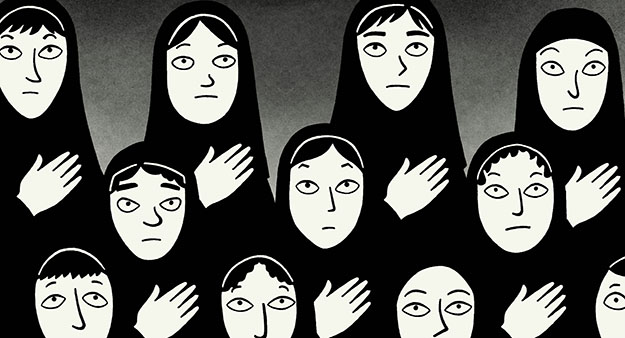 Persepolis, of course, is an auto-biographical work detailing the life of an Iranian woman who came of age during the turbulent period between the late '70s and early '90s -- the Shah is deposed early in the story, and most of what happens throughout the rest of the film directly follows from the fallout of that coup. The setting, then, is the brief period of radicalism that gives way to the rise of hardcore, institutionalized Islamism, and how Iran's internal upheaval and external struggles played out in the author's life.

Despite the gravity and enormity of the film's events -- which run the gamut from political dissidents being disappeared to the month-long bombing of Tehran at the end of the Iran-Iraq war -- the film's tone is fairly low-key throughout. The perspective is quietly personal, and never gives way to needless embellishments despite a number of close encounters with death (or fates worse than). Marjane never dwells overlong on her losses, allowing the the emotional impact of death and separation to follow simply from the narrative context and the relationships developed over the course of the film. She also demonstrates a light touch when dealing with her personal or philosophical realizations -- rather than lapsing into heavy-handed monologues, these profound moments are depicted comically (though not always humorously): conversations with a caring but fatalistic God (with occasional cameos by Karl Marx), an abstract vision of crippling depression, a hilariously tone-deaf "Eye of the Tiger" montage. 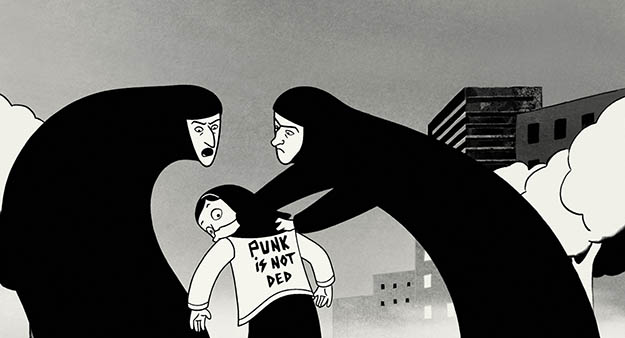 It's difficult not to like Marjane and her family as they struggle with the tightening grip of moral and political absolutism. Persepolis should be required viewing for everyone with a gung-ho determination to start bombing the hell out of Iran ASAP, because the film paints a truer portrait of the Iranian people than you'll see on the six-o'clock news -- the kinds of people who would suffer if Tehran were to become the next Baghdad. There are history lessons here if you're willing to pay attention, things that we tend to forget in the West thanks to the common tendency to paint the Middle East as one big, homogenous mass of militant suicide bombers. Marjane could easily have been someone we went to school with, hung out with: a spirited girl with a love for heavy metal music, boys, and leftist philosophy.

As the Ayatollah tightens his grip on the nation's culture, she doesn't lose her interest in those things; she simply goes to greater lengths to find them, and hide them. Her friends and family outwardly adopt government-mandated behaviors and appearances, but in private they still enjoy their liquor, their rock music, their Western clothes. She and her friends still behave like teens, whispering and doodling in class, gossiping, going to parties. They just do it a lot more quietly than before. 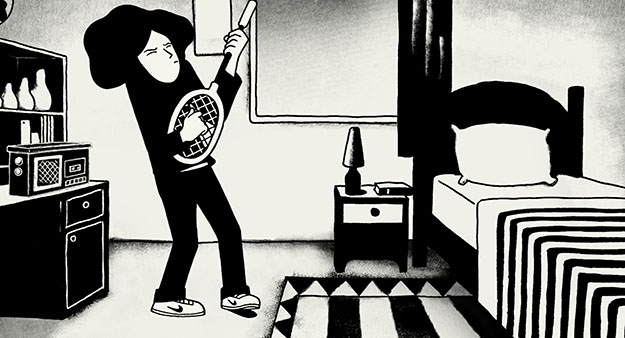 Persepolis is a quietly heartbreaking movie, not simply because of the difficulties the character Marjane experiences, not simply because these experiences are rooted in fact, but because of the bigger picture it represents. Her trials and struggles are a reflection of a nation's troubles -- its desire to break free of despotism, a brief period of liberation that finds itself subverted by the tyranny of the leaders who were supposed to be the antidote to what had come before, the deaths of millions in a war engineered by outside superpowers, the steady erosion of independence and hope beneath the constant boot heel of fascism.

I can't help but think of Persepolis as a gentler version of Maus -- but no less affecting for its mildness. The Ayatollah's rise isn't exactly a mass-grave horror on the level of the Holocaust, but it was nevertheless a massive cultural transformation that affected (and often ended) the lives of millions. And like Maus, Persepolis shows these changes and hardships and flights of exile and deaths from the ground level, and is all the more powerful for its basis in fact... and for its abstract visuals, which lend it a certain universalism that transcends borders. It had a particularly profound effect on my girlfriend, who arrived in American from Vietnam in her infancy and whose parents experienced struggles with striking parallels to Marjane's. 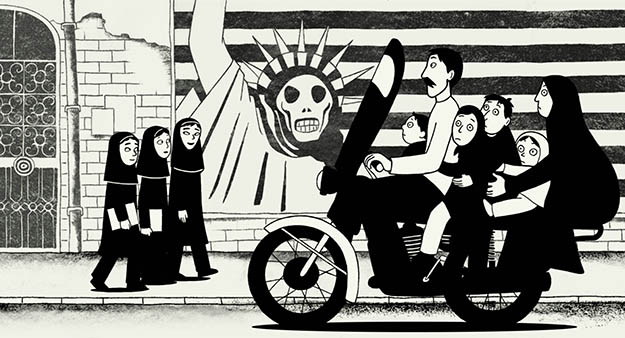 In other words, it's a movie worth watching. No doubt it will come to your town soon. Please look forward to it (bow).

Whoops, transcended the wrong border there.