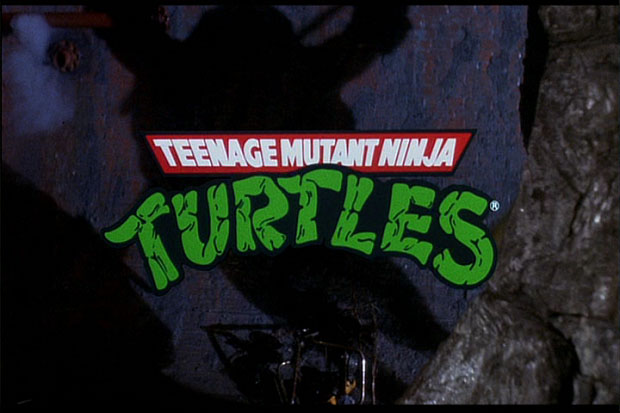 Teenage Mutant Ninja Turtles is quite possibly the best movie ever made about anthropomorphic turtles. (It's a more crowded field than you might think.) The Turtles were a cultural phenomenon in the '80s and '90s, meaning you either constantly begged your parents for the toys or else your kids constantly begged you. And, heaven forbid, if you're too young to remember that, the so-called heroes on a half-shell have remained in the public eye thanks to their 2003 cartoon and last year's computer-animated film. Not an American? That would almost be an excuse if not for the fact that Turtle fandom has thrived admirably from the UK to Germany, from Sweden to Japan.

The Ninja Turtles were a veritable phenomenon. Cartoon show, movies, video games, table-top RPGs, cereals, toys, Happy Meals, manga, anime, and even a live-action concert tour -- the Turtles were a genuine hit, and it all started with one comic book by Peter Laird and Kevin Eastman. Of course, it's unlikely the pair ever felt their independently-published parody of Frank Miller, X-Men, and Daredevil would ever make much of an impact in the world. But once the TMNT machine kicked into gear, it evolved into an international business at an ungodly rate. The concept evolved from a night of brainstorming between Laird and Eastman in which they drew a short turtle with nunchaku, making an incongruous pairing of the slowness of a turtle and the agility of a ninja. In a daring move, the pair used a loan and a tax refund to form Mirage Studios and self-publish their first comic: TNMT #1.

The original print runs of the first few issues were understandably low, coming in around five thousand copies, making them collector's items nearly overnight as the comic quickly grew in popularity. Over time, the comics became less about parody and more about serious problems like those presented in the books they once parodied. Isolation, rejection, death -- the maturity of the material was matched by the grisly violence found inside. While this mature version of the Turtles was a definite hit, they became a cultural phenomenon by aiming right at the kids' market. The 1987 Saturday morning cartoon was their breakthrough, stripping the original concept of its darkness and satire to be replaced with a kid-friendly attitude and lots of "x-tremeness." By helping to pioneer the magic formula of "funny animals" and "attitude," the cartoon was a hit with a wider, older audience than mere funny animals alone could manage. Plus, it had a certain mass appeal: everyone could relate to the Turtles, outcast and alienated from society. Their perspective was always more hopeful than depressing; the Turtles never gave up, never admitted defeat. At the same time, it wasn't all angst and archetypes -- the show was funny, occasionally clever, and filled with entertaining action.

Their 1990 live-action film sought not only to deliver on this, but to amplify it. It was essentially an adaptation of the comic book, with sprinkles of the cartoon show added in: serious and dark, yet humorous and kid-friendly. The Turtles here are much more ninja-like than in the TV show, skilled in the art of weapon combat and stealth. They even (gasp) curse, mildly. However, there's a steady stream of comedy too, and no one, save the main villain, technically "dies." (And even he didn't really die, thanks to the magic of retconning.) 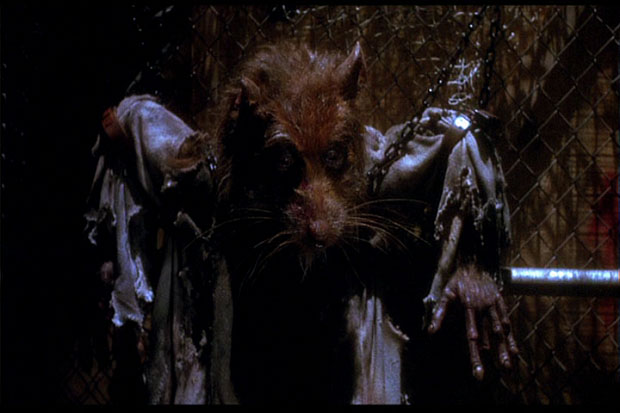 Likewise, the story and canon of the film draws upon both the cartoon and comic. The film's April O'Neil isn't a computer programmer as she was in the comic book but rather a news reporter a la the cartoon. But the Foot Clan is made up of run-away teenagers, not robots like in the cartoon. It's a coming-of-age story; four brothers lose their father to the villainous Shredder and must learn the meaning of teamwork and love. And ninjitsu. Infighting is common, particularly between Leonardo and Raphael. The former seeks to overcome his personal pain to be the leader he knows he must be for his brothers, while the latter wants to bring swift revenge to bear on the Shredder instead of dealing with his trauma.

Perhaps unfortunately, the film mostly focuses around the exploits of Leonardo, Raphael, their rat-man master Splinter, and the Shredder. Michelangelo and Donatello's roles seem more like cameos at times than main protagonists as they pop up every once in a while to quip a one-liner or share a touching Kodak moment. 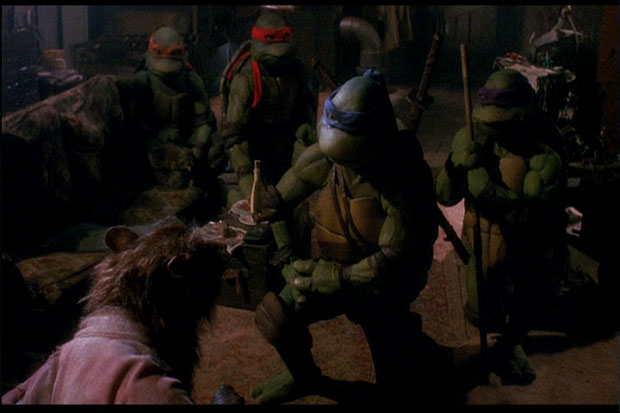 The film's success wasn't contingent on its story but rather because of its deft combination of story and stylistic action. The action could have been horrible; giant turtle suits can't be easy to design or maneuver in. But Jim Henson's Creature Shop did a wonderful job not only designing suits which allowed the stunt men to do their job well, but also designing natural, realistic (well, "realistic") faces that were capable of conveying much more emotion than you might expect.

The action here is more realistic and more explicit than that of the cartoon. So are the central themes, which center around the loss and death of a family member, around alienation, and around struggling to find purpose in life. It's rated PG rather than G for good reason. The more serious and realistic action or the darker themes may be too much for younger children to handle. Are your kids mature enough to handle the Shredder being crushed to death in a garbage truck? 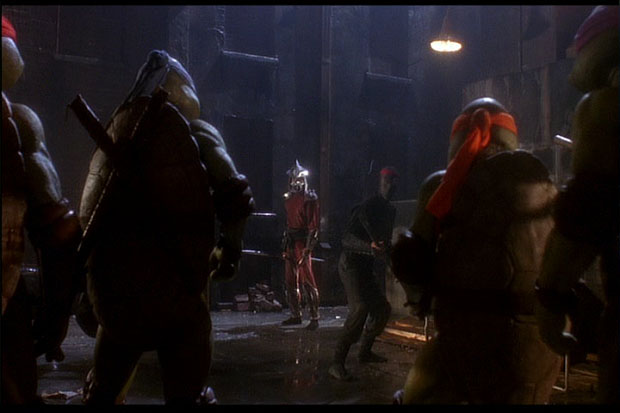 The film represents the Turtles phenomenon at its peak; it does a brilliant job of both catering to the lowest common denominator and maintaining a respectable level of quality. It was pretty much downhill from here for the Turtles, as their mass audience grew up and lost its zeal. Later films and television shows were either too campy or too strange (and were of significantly poorer quality) than this one bright point -- which is why the Turtles, until recently, have been more a relic than a pop culture icon.