This year for Christmas, I asked for (and was given) a manga with a "parental advisory" emblazoned on the cover. This is what I get for adding random books to my gift list without doing proper research about why they've netted so much positive buzz. Or, say, looking at the cover. That's not to say the advisory actually made any difference; it just prompted some bemused comments from my mother. Sorry, mom. I won't ask you to buy me smut on Jesus' birthday ever again.

Not that I'd really classify Welcome to the N.H.K. as "smut." There's definitely questionable content afoot, but very little of it is intended to be titillating. Rather, it's there to help paint a more accurate picture of how big a loser the main character is, like Ataru Moroboshi's relentless lechery in Urusei Yatsura -- except that N.H.K.'s protagonist Satou possesses much less of Ataru's brain-dead goofiness and more of a real-world sense of patheticness, the kind you might actually encounter on an average day. There aren't too many lecherous idiots trying to escape the romantic advances of beautiful half-naked aliens in the world, but socially defective shut-ins? Folks, this is the Internet era. You're likely to be flamed by several of them on 4ch or NeoGAF today. Before breakfast.

Satou is a member of Japan's hottest new demographic, the hikikomori: young urban recluses driven to isolation by anxiety or depression. I've heard the word "otaku" means "your house" somewhere in its etymological lineage, and hikikomori -- a sort of elite division of otaku, if crippling emotional defects could be considered a sign of merit -- honor that linguistic root very literally by never, ever leaving their homes. In Satou's case, he dropped out of college two years ago and hasn't spoken to another soul since. And though he slowly blooms as a wallflower over the course of the manga, he mostly just brings embarrassment upon himself. He's unable to hold up his end of a conversation, mainly because he's so paranoid of others' critical thoughts that he inevitably blurts defensive remarks to accusations that exist only in his mind. And when he decides to make something of his life by teaming up with an old school acquaintance to create an adults-only PC game, his "research" consists of a week spent filling a hard drive with child porn.

On this level, Welcome to the N.H.K. reads more or less like a broad satire (and rather cruelly, since it's directed at a subculture that already feels like the world is making fun of it). At one point, Satou and his cohort Yamazaki sit down to create their game's love interest, who they hope will become the ultimate expression of "moé" Their result: she's the main character's childhood friend, his lover from another life, and a robot alien with a disease only the hero can cure. In short, she's moé's "protective love" mindset taken to an extreme! A very, very revolting extreme. 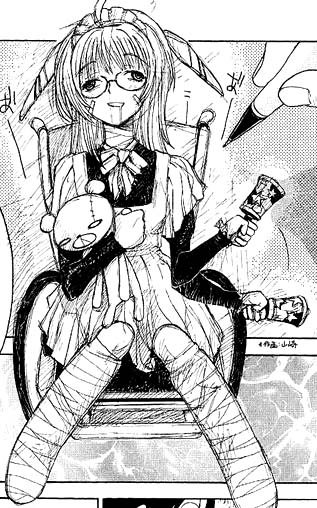 On the other hand, he is the protagonist, and he's certainly presented in no worse a light than the non-hikikomori types around him. Misaki, the beautiful young woman who makes it her mission to cure Satou of his reclusive habits, is clearly every bit as obsessive as her target (and a bit on the creepy stalker side, too). His pal Yamazaki is a dope. Most tellingly of all, Satou eventually bumps into his high school crush (referred to only as "sempai") who unlike him is a "productive" member of society. Although she's actually as reality-shy as Satou. The difference is that her escape from the pressures of life is more figurative; clearly she didn't play enough N.A.R.C. or else William S. Sessions' important message that winners don't do drugs would have made more of an impression on her.

And it's probably worth noting that N.H.K. was originally published in Shounen Ace magazine, which is targeted toward otaku types. Satou could be a "there but for the grace of god" cautionary tale to encourage hikikomori readers to get a life, but manga's a cynical medium. Shounen Ace, after all, is host to Sgt. Frog, a manga whose sole mission is to sell Gundam merchandise through marketable mascot characters and relentless panty shots of a 14-year-old girl destined to become unnaturally busty. So, yeah, more likely is the prospect that N.H.K. is intended to serve as a sort of answer to the "Train Man" franchise: yet another vicarious chance for dreary losers to say, "Even someone more pathetic than me can find happiness and love!" Except with more wackiness and moé, and less sloppy sentiment and 2ch canonization.

Still, there's an outside chance that Misaki's ulterior motives are far from altruistic, that Satou will end up heartbroken, that he and Yamazaki will find themselves in jail, that the ultimate message of N.H.K. is one of despair and bitter emptiness. And the prospect of bleak realism in manga, however slight, is reason enough to look forward to volume two. Well, that and the anthropomorphic toaster. I love that guy.