Things have changed since I last wrote about Welcome to the NHK. Or rather, my awareness of things has changed. Some of the magical uniqueness of the series has been rubbed away by the friction of my exposure to other, similar manga and anime; the series' pointed social commentary seems somewhat dulled now that I've discovered that just about every comic and cartoon to come from Japan these days is also about nerd culture.

Of course, these works come in many, many different forms. Welcome to the NHK is still a scathing critique of the basement-dwelling hikkikomori subculture that wallows in vapid popular culture to avoid facing its collective social paralysis, which puts it on an entirely different level from something like, say, Sgt. Frog, a hollow exercise in promoting senseless acquisition for acquisition's sake.

Charming as Sgt. Frog seems at first, read more than a few chapters and you'll eventually notice its innately vapid nature. Then the main character's recurring obsession with Gundam starts to stick out. It quickly transcends "amusing character quirk" status to become "naked product placement." This becomes especially obvious if you ever have the occasion to wander into a toy store in Akihabara, where you'll encounter the bulk of an entire floor dedicated to Sgt. Frog/Gundam crossover toys. It's basically a kids' cartoon designed to train them to be obedient otaku.

The more you think about that, the more revolted you should be.

Of course, there's more to all of this than mere capitalism. Probably. Self-referentialism is an inescapable part of any creative medium. Music? Sure. Pink Floyd's The Wall stars a character named Pink Floyd who appears to be a giant katamari of the band's worst traits -- Richard Wright's coke addiction, Roger Waters' daddy issues, Dave Gilmour's shaved nipples. Books? Definitely. Stephen King will turn back into a pumpkin if he ever writes a lead character who isn't a male novelist living in Maine.

Still, there's something unsavory about anime's sudden obsession with itself and its newfound fawning and doting over its readership. It reeks of the worst kind of opportunism, preying on the outcast with flattery in order to squeeze him of his money.

"You matter, really!" it smarms. "You're not just a lot of obsessive-compulsive losers with a poor ability to prioritize your discretionary spending. You have hopes and dreams, too! Someday, you will get the impossibly beautiful girl and no longer have to hump a body pillow in lieu of human companionship! (Unless you're a girl, in which case you'll get the impossibly beautiful borderline gay boy!)"

I dunno. Maybe these efforts would seem more sincere if the underlying subtext weren't, "So please buy our crap." 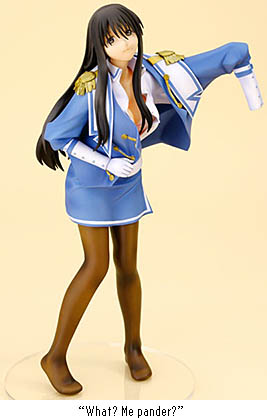 The worst offender I've encountered so far is Genshiken, a cloyingly insincere pat on the back to every insecure hikkikomori-in-training ever to shuffle awkwardly down a Tokyo street without daring to make eye contact with passersby. Genshiken doesn't examine otaku culture, it sanctifies it, holding socially and academically unambitious failure aloft as a golden ideal. It presents a bizarre, fetishized fantasy world in which being a nerd in Japan is little more than carefree idyll day in and day out.

To wit: You have your pretty-boy porn-game freak whose beautiful and otherwise self-reliant girlfriend nevertheless clings to him while he spurns her advances in favor of his latest hentai dating sim. The main character who is a "character" in name only -- little more than a blank slate upon which the reader is free to project himself. But please don't pause to contemplate the notion that anyone would ever actually want to relate to a personality-free cipher with so little ambition that he joined a rock-bottom school manga club because he didn't have any other interests to take precedent. It'll make you sad if you think about it too long.

Oh, and then there's Ohno, the shy, gorgeous, massive-breasted late addition to the Genshiken crew. She loves cosplay! But sometimes she feels all embarrassed by her revealing costumes. So vulnerable, you just want to take her home and ravish--er, cuddle her. Protectively. Yes. Did I mention she's only attracted to fat, ugly guys? That's right, gentle (fat, ugly) Genshiken fan, there's hope for even you! Because Japan is just full of girls exactly like Ohno, honest. Please express your joy by buying hundred-dollar PVC statues of her in a state of partial undress. (Act now and we'll include a vinyl skirt that can be removed to reveal her pantyhose -- not that you would ever think of such a delicate creature in a sexual way! That wouldn't be moé at all.)

It's safe to assume that the Japanese otaku living the real-life version of the Genshiken existence are miserable souls clinging desperately to this idealized version of their unhappy lives. That's almost as bad as the American otaku who sincerely believe that this is what living in that perfect land called Japan must be like. (Nani! Baka! Why, just reading this makes me feel like I'm totally Japanese myself! Even moreso than Megatokyo!!) 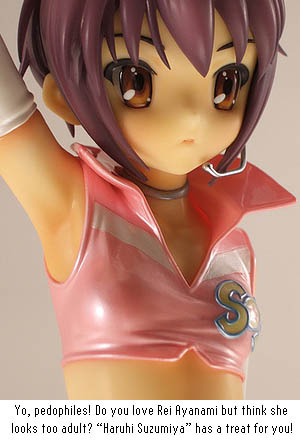 And then there's the enigma that is The Melancholy of Haruhi Suzumiya, the hit sensation that's sweeping America (having already swept Japan off its feet). Haruhi is a strange case, because while it certainly panders as vigorously as Genshiken and Sgt. Frog, it possesses a certain ironic self-awareness. But you know, the problem with satire is that the best examples skate a hairsbreadth away from being that which they mock, and nowhere will you find a better example of this principle in action than in Haruhi. (Well, maybe "nowhere" isn't entirely accurate....)

The Melancholy of Haruhi Suzumiya quietly pokes holes in the tropes and conventions of anime, deflating viewer expectations at every turn as it breathlessly flings the characters through situations both mundane and preposterous. Particularly impressive is the "zero" episode, which takes the form of a terrible student film created by the show's characters -- presented with a level of amateurish authenticity and calculated sloppiness that could only have been crafted by people who suffered through years of similar crap created by their more inept film school classmates.

All of this is great, and it makes the series' blatant pandering all the more woeful. Sure, Haruhi is satire; the busty girl seems like a mindless, vulnerable airhead whose every act drips with unintended sexual innuendo; the girl who looks like Evangelion's Rei is shy and introverted to such an extreme that she's clearly parody; yet both are simply playing a role so they'd be chosen as accomplices to a conniving who hopes to prey on geek fixations to popularize her pet project. And they gamely, hilariously participate in goofy, out-of-character events, just like the dozens of Gainax-licensed Evangelion figurines that feature the series' cast acting in ways that bear no relation to their actual personalities. Like, say, Rei popping mad wheeliez on her BMX. (No, really.)

But just how sincere is satire when it wallows in the same filth it looks down upon? Haruhi became an instant hit, and the market was flooded a little too quickly with creepily-detailed figures and statues of the series' cast. (Well, the female cast. Funny how the male side is always so poorly represented.) It casts a pall of disingenuity over the whole affair; you can't mock anime culture's shortcomings with one hand and grasp shamelessly for money with the other. Something about Haruhi leaves me with that same sensation of hypocrisy I feel when a vocally pro-family, anti-gay politician resigns in shame because someone went public with his side hobby of buggering little boys. 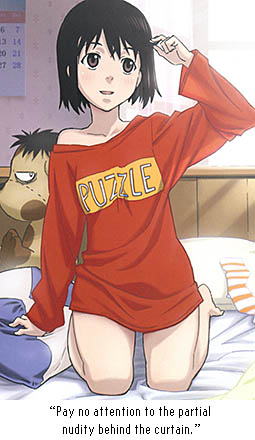 So you know, come to think of it, I take back what I said before. Welcome to the NHK's razor viciousness seems barely dulled at all in within the context of its peers. Yeah, the merchandising features way too much scantily clad Misaki -- way too much -- but the essential bluntness of the manga remains uncorrupted by the handful of crass collectible that have popped up in its wake.

The difference -- aside from the sheer volume of questionable Genshiken and Haruhi merchandise compared to NHK goods -- is that this series began life simply as a novel. The manga evolved from that, and the anime was adapted from the manga. It was only once the anime became a success that the licensing floodgates opened. Even the series' ostensibly sexy characters aren't really that sexy, and as I've noted before they're every bit as emotionally damaged as hikkikomori main character Satou. On the other hand, it's hard not to look at Genshiken and Haruhi's respective casts and see instantly how they were carefully crafted for maximum PVC figurine appeal.

[Edit: I'm reminded that The Melancholy of Haruhi Suzumiya began as a novel, too. So I guess it's out of excuses.]

NHK is the unflinching look at the depths of otakudom here, but ironically it's not the most cynical of the lot. In other words, you can buy a licensed Misaki-in-bondage hug pillow, but that doesn't change the fact that the source material is calling you a pathetic piece of garbage.

As for Volume 3 itself, the manga continues to chronicle Satou's descent beyond "dregs of humanity" status. After a seeming catharsis last volume, he begins this book by shutting himself in his apartment for weeks; there, he rarely sleeps and spends every moment playing a thinly-veiled analogue of Final Fantasy XI. He soon falls in love with someone playing a Mithra-like cat girl. This ends predictably, and disastrously, when he discovers a fundamental truth of the Internet and the "women" therein.

Throughout the entire series, Satou despises himself for his inability to deal with reality on its own terms. Once again, he willingly accepts Misaki's efforts to turn his life around; he suffers visions of himself as a morbidly obese 50-year-old, still playing FFXI, sponging off his elderly parents. He wants to change, but he simply can't.

Despite his own self-revulsion, Satou is incapable of effecting a true personal transformation. Ultimately, he's a victim, the same kind of victim that Genshiken's cynical ancillary licensing seeks to prey on. Someone in desperate need of validation from other humans, who can be manipulated with a simple word of kindness... no matter how insincere. This fact becomes all too clear when he allows himself to be drawn helpelessly into a pyramid scheme -- and into crushing debt -- by a former schoolmate. It's pathetic to watch, and all the more tragic for the fact that it's borne of his desperate lack of self-esteem and the delusional belief that he's somehow getting the upper hand by allowing himself to be used. Until the grim reality of it all sinks in, anyway.

And yet, despicable as he may be, Satou is once again hardly alone in his failings. Misaki proves to be just as susceptible to victimhood in her own way; his "friend" Yamazaki is selfish and manipulative; his old classmate is simply another victim who resorts to preying on those more vulnerable than herself in order to undo her own failings, even if it means betraying those who trust her.

So maybe that is the difference between Welcome to the NHK and its pop culture peers: Not that it's negative or vicious, but that it's even-handed in how it dispenses its negative and vicious elements, transforming an essentially unlikeable character into something like a sympathetic protagonist simply by demonstrating that he's hardly any more flawed than the "superior" people around him. And amidst this dire reality is a hint of hope. Not the cloying "Everything will be OK!" kind, but rather the slow, painful kind. Volume 3 ends with Satou and Misaki agreeing to start over, to renew their effort to salvage his life. Clearly it won't be an easy task -- especially while Misaki is harboring ulterior motives of some sort -- but at least there's the prospect that life has hit rock-bottom and can only go up from here.

Personally, though, I'd be willing to bet it somehow gets worse.

This is a very exciting placeholder for a Volume 4 link.