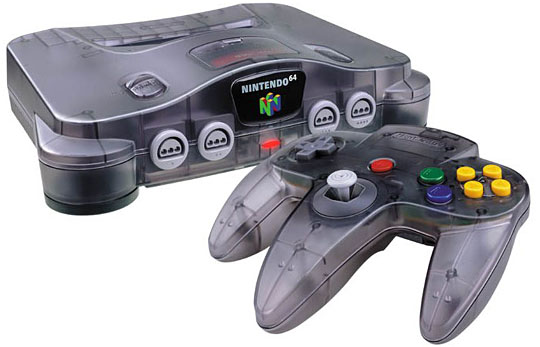 It's funny to me how quickly some people write me off as a Nintendo fanboy. See, a few years ago, Nintendo fans hated me. And there was a good reason for that antipathy: the N64. I despised the N64 and everything it stood for, and its supplicants hated me in return.

Much to my surprise, the 10th anniversary of the system's Japanese launch was just a few days ago. Does this mean I feel very old? Why, yes. Yes it does.

But it also means Nintendo has come a long, long way in the past decade. N64 was a terrible excuse for a console, designed to create profit for the Big N at the expense of gamers, developers and publishers alike; frankly, I despaired of Nintendo ever getting back onto the right track and eagerly awaited news that they had bowed out of the console race. Fortunately, they didn't, and I couldn't be happier. That's because the upcoming Wii is in every way the absolute antithesis of the N64. The company has learned some hard lessons in the past decade, and if N64 is the embodiment of Nintendo's former hubris, Wii is the very definition of their ability to adapt.

The N64 is long dead and happily forgotten, but I'm always willing to kick dirt in a loser's face. So to mark the 10-year birthday of Nintendo's third-worst failure (right after Virtual Boy and New Super Mario Bros. *), let's make N64 eat the dust of its five greatest shortcomings.

Remember all those lofty promises about how N64 would deliver graphics that would be indistinguishable from Jurassic Park's dinosaurs? Right. The final results did look just like Jurassic Park. If you had cataracts, and squinted a lot with your glasses off.

The reality -- and not in the fanciful "Project Reality" sense -- was that N64 graphics were a smeary, blurry mess; I've never been able to finish Ocarina of Time, because the contrasty, blown-out graphics literally give me a headache. The problem: The N64 had a shockingly limited amount of system memory given over to textures, so the game was plastered with tiny, heavily-compressed JPEGs stretched and filtered to the point that they looked like vomit. The result: flat-shaded graphics looked far better than textured polygons. Counter-intuitive? You bet!

Meanwhile, the full-screen anti-aliasing that softened polygon edges would have been a great feature on a system capable of higher resolution. At the N64's 320x240, though, it just gave the impression that your TV screen had been glazed with Vaseline.

And yet, so much effort was poured into making N64 a graphics powerhouse that Nintendo scrimped in other crucial areas; the system didn't actually have an independent sound processor, meaning that a portion of the core hardware had to be given over to the task of creating sound. The madmen at Factor 5 somehow managed to create near-CD quality audio through creative streaming, but for the most part N64 games looked bad and sounded worse.

The heartbreaking bit: The PlayStation, which ran at barely more than 1/3 the N64's speed, often created crisper, more detailed graphics than N64. Swimmy textures or not, Vagrant Story spits on the N64 library from great heights. 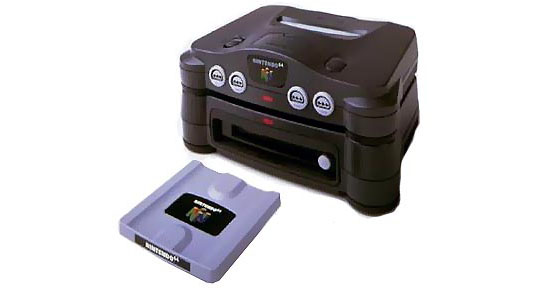 Add-ons are never, ever a good idea, as Square Enix recently learned the hard way when Sony decided not to make the slimline PS2 compatible with the PS2 HDD (upon which Final Fantasy XI is extremely dependent.) In fact, Nintendo has a pretty lengthy history of misbegotten add-ons... there was the Famicom Disc System, a fragile device which was quickly outclassed by growing cartridge capacity. And the Play Station CD-ROM for Super NES, which was never released, and whose death prompted Sony to enter the hardware market and annihilate N64.

64DD was no different. While it went mercifully MIA in the U.S., Japanese gamers were given the dubious pleasure of shelling out $200 for a device that enabled a tiny handful of games and expansion packs. Granted, the 64DD did give us Animal Crossing, but it had more strikes than hits: besides the expense and poor support, it was eventually outclassed by high-capacity carts (hmm, seems to be a running theme). Oh, and it was based on Zip Drive technology. Mario meets the click of death.

Microsoft, you know that HD-DVD add-on you're releasing for Xbox 360? Take a clue from history and don't. Please?

3. Too much Rare, not enough Nintendo

British developer Rare has had its moments, but sadly they seem to be far in the past. And the company's decline truly began on N64, as its output was largely derivative of Nintendo's work, but shinier. Yet less fun. And with much fussier controls and a pathological obsession with forcing gamers to collect several thousand completely pointless little trinkets. The only truly notable Rare creation on N64 was GoldenEye 007, which was the best multiplayer first-person shooter ever... unless, of course, you had ever played any PC FPS.

Meanwhile, Nintendo's first-party content was thin on the ground. Complain if you will that they're milking their franchises these days, but at least you're guaranteed a steady stream of quality goods for your DS. On N64, Nintendo offered you one major title each Christmas, which you'd be lucky to find at release thanks to the carefully-calculated seasonal "shortages" that "plagued" the system from the start.

Or, hey, maybe the shortages were legit -- it's possible, given the pitfalls of the cartridge format, which the company foolishly used for N64. People always point to carts as the worst thing about the N64, and they really were. But not for the reason that most people cite.

The problem with carts wasn't limited capacity; you can create a damn fine game in very little space, if you try. The relatively small memory was more a psychological impediment for devs than a real limitation. Of course, it prevented the use of excessive full-motion video -- but who cares? Well, Square cared, and their defection over Nintendo's format choice was keenly felt. Still, the best PlayStation games were good despite their abuse of FMV... and many eschewed it altogether. (Again, see Vagrant Story.)

No, the real problem with carts was that they were incredibly expensive. Nintendo discovered with NES that proprietary formats are a license to print cash monies. Publishers pay a tidy sum to have Nintendo manufacture their products, which saddles those company with all the risks and burdens of the process. Whether the game sells or not, Nintendo makes its money upfront. As a result, major publishers like Acclaim and Capcom took a bath on unsold 16-bit carts, and going into the next generation everyone in the industry (except Nintendo) was incredibly gunshy about committing to another expensive proprietary format. Needless to say, when Sony began leveraging the low manufacturing costs of CD-ROMs to make PlayStation games much more affordable than N64 games -- $50 versus $75 -- consumers were more than happy to buy good games for less, loading times or not.

And for all of Nintendo's droning about how carts were harder to pirate, I saw N64 ROMs floating about the Internet in far greater numbers back in the day than I did PS1 or Saturn ISOs.

But the absolute worst thing about the N64 was its controller. If there's a single aspect of the N64 that makes it the un-Wii, it's the ugly, cumbersome, inconvenient controller. I don't care if it mainstreamed analog input; I don't care if it popularized force feedback. The N64 controller was a monstrosity. It was the first pack-in controller that ever required instructions on how to hold it. And that, dear nerdlings, is the very definition of a faulty user interface.

The N64 was the first time I ever offered someone a chance to play only to have them gawk at the device I was handing them like it was some kind of diseased monster. And this didn't happen with one person -- every single time I introduced it to someone, I got the same look. And the same question. "How do I hold this?" Not a stunning success for Nintendo.

In this light, Wii is powerfully encouraging, because it seemingly avoids all these pitfalls: The controller is intuitive, the media is perfectly capacious, development and publishing will be inexpensive, there's been no talk of add-ons beyond alternate controllers. Oh yeah, and there'll be no Rare games.

These days it's Microsoft (somewhat) or Sony(an awful lot) who seem to be veering in the N64 direction, promoting systems almost entirely on graphical merits and callously unconcerned about whether or not anyone can actually afford to create games for the system. But it's not too late to learn from Nintendo's failures, guys!