I discovered something shocking a few days ago: Dragon Quest turned 20 at the end of May, and no one around here bothered to mark the occasion. There have been a few years where everyone forgot to wish me a happy birthday (like this year, when my coworkers took someone who shares my birthday to lunch but didn't so much as give me a paper hat), so I know what it must feel like for Dragon Quest. All its so-called "friends" totally blowing it off on such an important occasion.

Yeah, so, sorry about that, DQ. Here's a slightly stale cupcake with a lonely little candle in it. 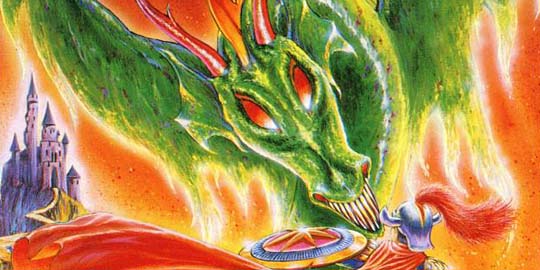 I don't know that I can really call myself a DQ fan, to be honest. I've only had the patience to play through two games in the series -- the original and the import version of Rocket Slime. (Which is totally great, by the way.) Still, I did enjoy the series' NES debut, even if it was pretty primitive-looking back in the day.

Nintendo of America clearly had a lot of confidence in Dragon Quest (called Dragon Warrior at the time for what are now apparently immaterial legal issues). And certainly there was reason to hope it would be a legitimate phenom for America's big-nosed, fat-assed gaijin, given its multi-million success overseas and the series' legendary ability to bring Japan's productivity to its knees on launch day. So the company produced a huge number of cartridges, gushed endlessly about the game in the pages of Nintendo Power, and waited for the sales to rack up.

Evidently those massive sales never quite came to fruition, since Nintendo was handing out free copies of the game to anyone who bought a $20 magazine subscription just a year later. Economist Alfred Marshall just emailed to tell me that this is not the treatment normally afforded a high-demand $50 product.

It's easy to see why Dragon Warrior was something less than a chart-topper. There's the small matter of it arriving over here a good three and a half years after its Japanese debut. That's quite a long time in terms of console life -- for comparison in PS2 terms, that's the difference between Evergrace and God of War. When Dragon Quest arrived in mid-1986, everything on NES was kind of ugly-looking and bloopy-sounding; by 1989, the system was reaching its heyday and Alefgard's sad little tile sets were maybe a little too unimpressive next to, say, Ninja Gaiden and .

Dragon Quest also had the built-in advantage of artwork by rising manga star Akira Toriyama, who created some of the only non-annoying artwork of his entire life for the game. His takes on standard fantasy enemies like skeletons and slimes and drakes were charming and lent the game a dash of color and whimsy. However, Toriyama was, well, nobody in the U.S. at the time, and Nintendo carefully discarded all of his cartoonish packaging artwork in favor of generic knights-and-dragons crap. (Although his DW work did fare better than his DragonBall game. Or should I say, Dragon Power.)

Dragon Warrior was simply a weird fit for the American NES market. PC RPG fanatics were enjoying real versions of Ultima (rather than the NES's sad Pony Canyon conversions) and many had moved on to SSI Gold Box RPGs. In comparison, Alefgard was a tiny kingdom with a paltry dozen different foes to battle via a stultifyingly limited one-man battle system. It was the epitome of fight-fight-heal-fight design.

Meanwhile, most console gamers had little interest in a game with no action to speak of. DW required reading, and there was no graphic killin' at all. Practically un-American, I should say. 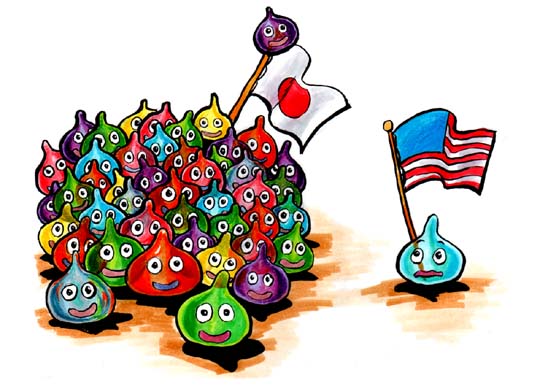 Nevertheless, I was suckered in by Nintendo Power's effusive hype. "RPGs are the future," it gushed. (Although as a young disciple of Larry Hama's G.I. Joe, I was temporarily confused by the notion of rocket-propelled grenades as videogames.)

So I swallowed the hype, grabbed a copy and rescued the princess. But zounds! Saving the princess was only the beginning of this quest. Eat that, Super Mario Bros.!

Yeah, so I was easily impressed. And I gushed to my friends about it. And over the course of a few days, I slogged through the adventure, explored every corner of the kingdom, found the various doodads and widgets, and defeated the DragonLord.

(But only after agreeing to rule the world with him and finding the true meaning of Worst Ending.)

Stupidly, I completely blew off the sequels -- the concept of a multi-character party sounded much too complex for my nascent RPG tastes. Right, OK, not the best decision I've made. And these days, who has time for a 100 hours of random battles? So the Dragon Quest series remains one of those things that is a fine idea in my mind... and something I don't really feel like messing with in reality.

That's still a pretty decent legacy, since there aren't a lot of ongoing series that strike me as good ideas.

I guess that's not much of a birthday card, though. "Happy birthday -- you don't completely suck."