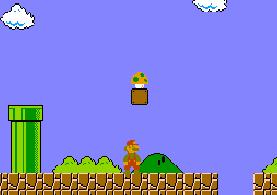 I'd played the game a dozen times before I stumbled into this: an invisible block just a short way from the starting point of the very first stage, containing a mushroom that looked much greener than the others. I was just randomly jumping along when Mario's head smacked into a hidden block and the mushroom popped out. It startled me... and also launched a private crusade to leap at every possible moment on the off chance I'd find something cool (which really paid off once I got to World 3). Extra bonus: it forced players to make a tough decision -- go for the extra life, or duck down the pipe to collect coins a screen earlier? You couldn't do both, so you had to decide which bonus was more fulfilling. Me, I always go with the 1UP.

After playing the game for a while, I started to see what kind of nonsense I could pull off. I'd noticed it was possible to run along the top of the stage in 1-2 if you could break through the ceiling (eventually uncovering another hidden 1UP in the process). But then I wondered, what would happen if I ran along the ceiling at the end of the level? Would the game explode? I wouldn't be able to reach the exit pipe... so maybe I'd be trapped in limbo forever. Needless to say, it was incredibly rewarding to discover the warp zone -- clearly, someone at Nintendo had predicted my game-breaking antics and decided to reward me for them.

World 8 instilled me with an everlasting fear of endgames. It wasn't enough that the platforming challenges in the last three stages before Bowser's castle were insanely hard -- no, Nintendo had to go and up the stakes by providing barely enough time to clear the levels. No time for love, Doctah Jones. Or caution.

The best part of SMB, though, was something that permeated the entire game: a sense of total, perfect control. After years of games with simple, janky physics (not that anyone applied words like "physics" the videogames back them) the smooth precision of Mario was a revelation. He jumped low and high, but never felt floaty. He could -- quite unrealistically, mind you -- change direction in mid-air. Running added extra momentum to his leaps. And while he didn't stop on a dime, his quick skidding halts were consistent enough that any time you fell into a pit, it was your own stupid fault.

And that is why SMB rocks.