Some time ago, around the time the Wii launched, I sat down to catalog my favorite moments from my gaming career. After about ten minutes I discovered that, at least personally, gaming isn't defined by moments. I came up with five entries, only to realize they were woefully poor at defining my taste and experience with games. One of the moments involved Pac-Man Vs., if that tells you anything. It was a pretty great moment, but still. It's just that games tend to stick with me based more on the holistic experience rather specific events. Take Katamari Damacy, one of my favorite games. It's a fantastic experience, but not one that's punctuated by any particular in-game event. I became enamored only after hours of soaking in the game's unique aesthetics, quirky humor, stellar soundtrack, and laid-back yet engaging gameplay. Yet some moments are arresting enough to leave a lasting impression, and my favorite moment ever occurred in my favorite game ever.

The Legend of Zelda: Majora's Mask is probably the second most controversial Zelda game ever released. It's not quite the black sheep that Adventure of Link? is, but it's pretty darn close. It's easy to see how gamers could be put off by the quirky adventure after Ocarina of Time's groundbreaking epic, but the truth is that attempting to out-epic Ocarina would have been futile. Instead, Nintendo did the smart thing and used Ocarina's engine and underlying formula to create a game totally different from previous incarnations of the series, and from games in general. The result was a tightly packaged, polished quest that was unlike anything that came before it, and still hasn't been duplicated since. Plus, you could make zombies soft-shoe, if you knew how. 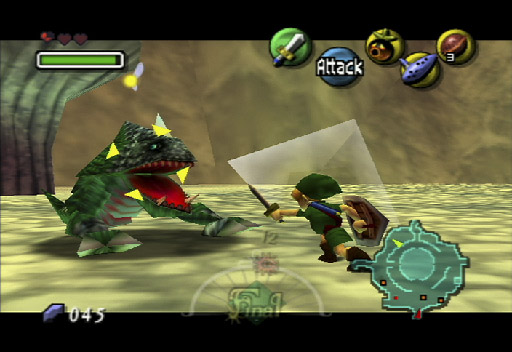 Shenmue came out only five months before Majora's Mask, so it's essentially folly to suggest it could have had any impact on Mask's development, but it's not too hard to imagine the development team saying, "You know what, this whole living world idea isn't bad, but what if we pared down a city of hundreds to a little town of thirty or so and focused on that?" All the weapon collecting and dungeon exploring and boss battling you expect from Zelda is there, but honestly, half of the game is inserting yourself into the lives of the denizens of Clock Town and helping them with their problems. You're always "materially" rewarded, of course; gamers would never help these characters simply out of the kindness of their hearts.

One such sidequest, which actually takes more effort and time than any of the actual dungeons, is reuniting the Innkeeper Anju with her absent fiancé, Kafei. Put bluntly, the Kafei/Anju sidequest has an extremely low reward-to-time investment ratio. It's probably the longest sidequest in Zelda history, discounting Skulltula/Poe Soul collecting endeavors, and rewards you with a mask that does nothing else except give you a heart piece if you talk to the right guy wearing it. That's it. Sure you need it in order to amass all 20 masks needed to receive Fierce Deity Mask, but the same could be said for the remaining 19, and collecting half of those of those involve walking up to an NPC and talking to them. Yet completing the quest is such a satisfying experience.

Unless you're lame and resort to a walkthrough, you're going to attempt to reunite them quite a few times. It's really too much to expect to finish it your first attempt. Or your second. Or third. And with every attempt you see the consequences of your failure. The closer you get to achieving your goal, the sadder it becomes. Make it far enough into the narrative and you promise Anju that Kafei will meet her at the inn. Fail and you're treated to an abandoned Anju sitting in the top room of the inn, hours away from the moon obliterating Termina.

And here's the kicker: Due to the nature of the game, Link remembers all of this. In most games, when you fail, the world restarts along with the hero. He's never aware of the fact that he died two seconds ago or that the Nazis obtained the secret plans. In Majora's Mask, Link keeps living the same three days over and over. He experiences every failure alongside you.

By the time you've completed the story, you've involved almost half of the characters in the game in what's an entirely optional sidequest. Anju, Kafei, Skull Kid, Sakon the Thief, the Mayor and his wife, the Curiosity Shop Owner, Anju's Mother and Grandmother, the Postman, Romani, Cremia, the Horse Thieves, the Circus Owner, the Traveling Merchant, the Bomb Shop Owner and her Son, and the Band Manager are all intertwined in the narrative. And after you've made all the right reservations, snuck into all the right back doors, and stepped on all the right pressure switches, you finally reunite the two.

I'm going to be honest here: It's touching. Kafei's still cursed and the moon's still going to smash into the earth in a few hours, but at least they're together. You got a few trinkets out of the deal, but really you spent hours for the singular purpose of making two people happy. Virtual people, of course, but isn't that always the case in videogames? We've never really saved to world or guided our team to the Super Bowl. We've only done what we wish would could do. Usually it's conquering the underground racing circuit or destroying the insect hive-mind or snuffing out the latest eldritch god, but here it's just reuniting two people coming to terms with their fate. That's more than enough for me.