Games | Nintendo 64 | The Legend of Zelda: Ocarina of Time

"Evolutionary step." It's an overused phrase when talking about gaming history. Useful, too. It encapsulates the slow, faltering way in which video games and its genres develop, mature, and fragment. In a medium defined by mechanics, every tweak to interface leads to new conventions, whole new subgenres, and fruitless dead-ends.

The Legend of Zelda: Ocarina of Time, however, is not an evolutionary step. It is not a glorified lungfish that writhed upon a sandbar, gasping, claiming the title of first amphibian by default. Ocarina of Time leaped from a tidal pool into the trees where it fashioned a primitive spear out of bamboo and an obsidian shard with its opposable thumbs.

But, like those pre-historic amphibians with the boomerang-shaped heads, such magnificent strides in progress are bound to be awkward. Ocarina has that expected Nintendo polish, but feels oddly unfinished in some respects. Little things, like how all those grottoes that await explorers are essentially all identical. Dungeon puzzle designs that could have stood a little more tweaking. World design that makes the game a little too slow for its own good. Art design that never really finds a unique voice. Every 3D Zelda since has improved on Ocarina's template by measures. 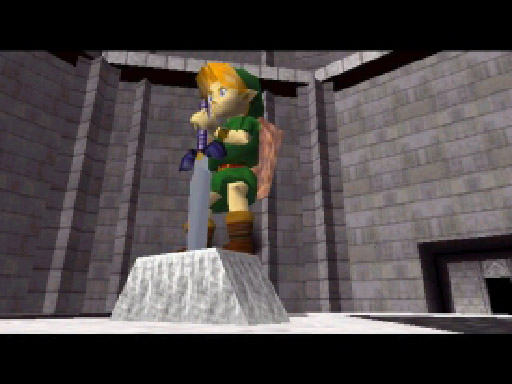 But its hard to name many other console games that were so evolutionarily necessary to the development of videogames. It's almost hard to imagine, but only a little more than ten years ago, people still weren't quite sure how to make third-person 3D games. Super Mario 64 had come out two years before and may have jump-started the transition, but even it didn't get it perfect the first time. It devoted a full two-thirds of its face buttons to controlling the camera, but still didn't keep Mario in the frame satisfactorily at all times. Sure, third-person 3D games were being made, but they were resorting to control inputs we wouldn't put up with today. Mega Man Legends? came out nearly a year before Ocarina and was a more than competent action-adventure game, but this was game where you had to use the shoulder buttons to turn.

A common sentiment is that Ocarina of Time is simply A Link to the Past in 3D, which is like saying the automobile is simply a stagecoach with an internal combustion engine. The difference between a 2D game and 3D game is more than adding a z-axis. You'd think gamers, having witnessed countless abortive attempts at transitioning a series into the third dimension, would appreciate just how much can go wrong. Ocarina, for the most part, makes the transition with aplomb. Actually, forget mostly, it makes the transition look easy, and the head-slappingly simple conventions it established make everyone else look like they weren't really trying.

It's not like the innovations made by Ocarina of Time were wholesale inventions that sprang forth fully formed from the minds at EAD. Lock-on wasn't an unheard-of mechanic (see again: Mega Man Legends), and context-sensitive buttons existed back when you used B both to fire Mario's fireball and to dash. But there was a reason people referred to lock-on mechanics as "Z-targeting" for years afterwards. Ocarina's use of the N64's Z trigger for holding a target was just so fully integrated and mechanically solid. Its use in controlling the viewpoint is elegant and streamlined, always keeping you in control while never forcing you to babysit the camera. Context-sensitive buttons became an integral part of nearly all video games, because Ocarina showed just how obvious and intuitive they could be. There's even the way it eschewed the then too-common practice of a hub with portals to finite levels in favor of a fully integrated, 3D world. If you're willing to call a mulligan on those extra-blurry prerendered sets, that is. 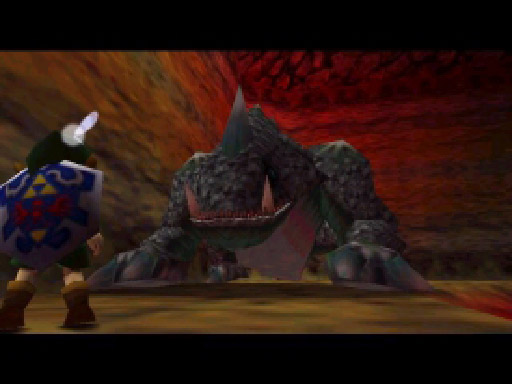 What's most surprising about Ocarina of Time isn't the checklist of mechanical innovations and refinements it contributed to video games, but that it did so in a package that was so appealing. Legions of gamers still list it as one of their favorite games of all time, and it's not just nostalgia talking. The game is charming, moody, hilarious, epic, and touching at turns. The combat was way too fun than a first shot in 3D should hope to be. Ask a dozen different people what their most striking memory of the game is and you'll get as many answers, from seeing Hyrule Field for the first time, to the game's understated intro, to the dream-like battle with Shadow Link, to Ganon bursting forth from the rubble of his collapsed fortress.

Ocarina can be appreciated as more than just a historically important landmark; it's a magnificently crafted game that reached for an impossible ideal and damn well nearly got there.