Portal is a remarkable game. What makes it remarkable, however, may not be immediately apparent. Its not the commentary track, or the non-violent gameplay, and its not GLaDOS. It also isnt the subversion of expectations when you break out." It's not even the Weighted Companion Cube. And its certainly not that infernal song that the Internet wrung and wrung with its dirty little stubby-fingered hands until it lost its charm and forced me to sing whenever Im within 50 feet of Rock Band. No, what makes Portal remarkable is its interface: The controls the player uses to communicate action, and the visual language the game uses to talk back.

The first time I saw Portal, it was in a small teaser video released in 2006. The teaser revealed the basics of the gun and some simple interactions. If Im remembering correctly, it also featured a recursive loop the player managed to create. I found it to be incredibly complicated, and commented Theres no way that game will be easy to play. Its one thing to create a game about teleporting from place to place, and another to create a game where the player can wrap her mind around that, and then control it all. Blame my own limited vision, or the fact Id never played a Valve game before, but Portal shocked me by effortlessly making teleporting look easy. 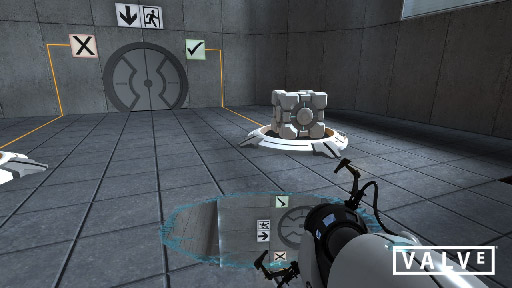 The player is given a very simple set of actions, and no button serves more than one function. This makes it easy to perform any given action at the drop of a hat. This simple moveset keeps everything focused on the core of the game: Portals. New strategies have nothing to do with unlocking button combinations or finding items and powers. In Portal, all gameplay advancement takes place in the players mind as she finds new and clever ways to utilize portals to advance. However, the ease of play goes much deeper than what the controller can allow one to do. The level design never obfuscates which actions can be done where. Portal-capable walls and floors are one color; others are thick and metallic looking. This remains consistent, and the game never forces you to explore a strange new third environment. Enemies look like enemies. Buttons look like buttons. Portal is not about exploring new and varied locales -- its about a limited set of resources and actions, all interacting together to solve puzzling situations. Just like the best puzzle games, you always know what youre looking at, you just have to figure out what to do with it. Solving those situations in Portal is sometimes challenging, but its never difficult.

Credit must also be given to the artistry with which these elements are introduced. Despite how most people describe the game, there is no proper tutorial. GLaDOS rambles on a lot in the early stages; however, she rarely discusses actual gameplay elements. In fact, the only time she gives direct instruction is when she tells the player to do something atrocious to a loved one. Instead, the player is trusted to learn the game with her own intelligence. First Portal provides a harmless playground, then a simple tool. While the player learns how to use the blue portal gun, the game (like a loving parent) takes on the task of the orange. This simultaneously allows the players mind to adjust to portaling without having to worry about everything at once, while also modeling behavior of how to use the orange gun, which the player then gains before long. At this point, she is on her own. 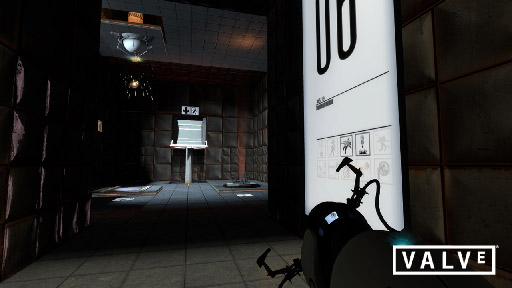 Easing the player into simple but versatile actions in an easy-to-understand environment is the golden rule of video game puzzles. Its a rule established by Nintendo and its premier game maker Shigeru Miyamoto. However, its hard to find a better example of this rule than Portal, especially now that Miyamotos own Zelda sequels feel compelled to drown the player in instructional text for longer time in-game than it takes to complete Portal in its entirety. Another of Miyamotos famous design philosophies is that a good game is like a sandbox. No, not a big sandbox filled with cars, guns, and prostitutesa childs sandbox, where imagination could create wondrous things in a limited space with a few simple tools. Portal is very much this sandbox. Within minutes of receiving the completed portal gun, an average player will have found a way to see her character from every angle, and created a recursive loop of her own. Not because it was required of gameplay, but simply because she could -- and never with more mental effort than a curious, Oh, I wonder if...

Every self-respecting gaming hobbyist espouses gameplay as king. Above graphics, sound, storyline -- any one of us will tell you that the single most important element is how the game plays: the interface between the player and the events onscreen. Yet we also heap praise on games that require us to hold down four buttons simultaneously just to fire a gun accurately. Thank goodness there are games like Portal, to save us from our hypocrisy.