It's May of 2002, and I'm sitting in the living room of my college apartment, playing the title screen of Zone of the Enders. Not the game, the screen, where you move the cursor up and down to pick whether to start the game or go to options or what have you. See, that game had the most haunting intro loop ever, and the sound effect made when switching between options melded amazingly well with the background trackso much so that I would spend hours moving the cursor up and down to the beat, effectively remixing my own chillout track.

My friend notices this odd habit of mine after the fourth or fifth day and tosses me the PS2 demo disc from that month's issue of Official U.S. PlayStation Magazine. "Try Rez," he says. "It's right up your alley." I doubt he knows how life-changing that sentence will be.

Upon firing up the demo, I'm presented with a boxy avatar floating over a faded purple landscape. He pulsates gently, hovering over an endless, silent grid. An enemy appears, and I track my cursor over him. Click, release, and a moment later a drum beat snaps through the world. I had done this. My action had created a visceral effect. And not just any effect, but a sonic report, laying the foundation for something much more. 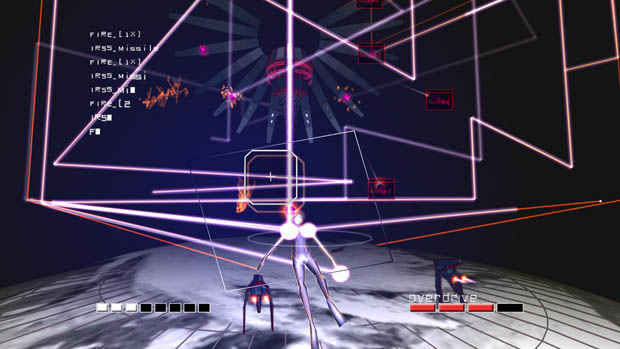 Another three enemies in the group, highlighted and dispatched in rapid succession. I learn quickly that the drum beats aren't just random but fit a specific time signature, as if the music already existed, and I'm merely wiping away the fog that separates it from me. And then the stage ends, moving me up the ladder to a world where the drum beat is a fast, furious 4/4. Suddenly, my shots aren't mere texture, but now are filling out a melody. Enemies fly in patterns cleverly designed to create a song"Buggie Running Beeps 01" by Keiichi Sugiyama, as a matter of fact. And if I choose deliberately to miss an enemy, my role morphs from mere gamer to club DJ.

In that moment, was I enthralled? You bet I was. My entire life, I had thrived off of the texture of sound, listening to crunching leaves in the fall, or the particular ting of a stick tapping on a thin layer of ice in a streambed, or the sound of Super Mario Bros. 2 paused in the midst of an invincible Star-powered frenzy. Here was a game whose entire purpose of being was for me the player to create sound, however I damn well pleased. It was the game I had always wanted yet could never envision.

And yet this demo had only one level. One level that I played over and over again. This same friend came back a week or so later, and tossed me a DVD case. "Here's the full game. I beat it in half an hour and figured you'd like it more than I did." Today, that case sits in a place of honor in my home, autographed by Rez director Tetsuya Mizuguchi himself some years ago.

But my friend was right -- the game was indeed short. Yet like any good music album, the length of the game was in no way indicative of the quality. Each level was carefully manipulated and designed, and each track was monumental in its own right. The bosses were drawn from every classical science fiction trope imaginable, and there was even a story of sorts, if you were high enough to bother.

Rez itself was a trek through enlightenment. Your avatar's lowest form was a tiny, weakly pulsing orb. As you evolved through block-man and lawnmower-man phases, the music tones you created evolved and changed as well. Eventually you reached the state of the sitting Buddha, looking much like an Arilou from Star Control II. But this was not the ultimate state, which had to be unlocked. Upon reaching Nirvana, you were once again a glowing orb, this time shining with the light of your gained knowledge. And when coupled with the absolutely epic final stage track, Adam Freeland's "Mind Killer," you the player were transported as well.

How many times did I sit in that trance, carried away by the music and limitless possibility of this game? It's hard to say. For months, though, I lived in Rez's world, devouring the synaesthetic pleasure of textured sound. The game finally gave language to the experience of my life -- colors had sound, sounds had feels, and the player was the instrument of creative change.

And this doesn't even begin to explore the imagery of evolution in the game. Tetsuya Mizuguchi created the ultimate soundscape, and I mourn that I can only live there temporarily.