It was a time of war. After fifty years of conflict with neighboring kingdoms, the land was in dire straits: The economy was in shambles, scores were dead or displaced, and the king had died without a clear successor. The noble houses supported the young dauphine, a puppet for the cruel and ambitious queen, while the commoners -- resentful for having been abandoned by the ruling class after giving so many lives for their homeland in the war -- favored rule by the king's kind-hearted teenage daughter. And so began a violent war of succession as each faction rallied around a prominent lord, each of whom sought to solidify their own standing by backing one or other of the candidates. Meanwhile, behind the scenes, the Church was working to solidify its own power through quiet treachery and manipulation.

Remember that story from the pages of history? Sounds familiar, right? Hmm... was it the events that led to France's revolution? No? Maybe something to do with Austria, then. Not that either? Ah, there's the problem -- this isn't real history, it's the history of imaginary land of Ivalice and the backdrop for Square's RPG masterpiece, Final Fantasy Tactics.

But the thing of it is, it could have been ripped from any ugly episode of European history. Although the War of the Lions is a fictional construct, it has the ring of authenticity, resonating with real events like the 100 Years War and the War of the Roses. And that's to say nothing of all the shenanigans the Catholic church was up to back in those days! Sure, the comparison breaks down when you start factoring in the magic stones and robots and the fact that wizards and summoned eidolons and airships factor into the story -- but those are just details. Take away the videogame trappings and you're left with a tale that could easily have been cribbed from the annals of the Enlightenment. 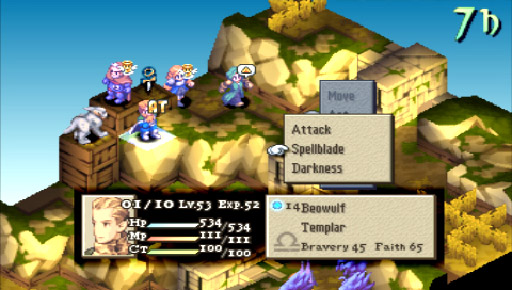 No surprise. Final Fantasy Tactics was the creation of a man named Yasumi Matsuno, perhaps the most idiomatic character to pass through the halls of Square. Tactics wasn't his first project, but it was the first to reach a large audience, and it introduced millions of gamers to his personal obsessions: intricate plotting, nuanced characters, and historical verisimilitude. Matsuno was quite unlike anyone else who has ever developed for Square, and Tactics is a perfect demonstration of what set him apart. Where current Final Fantasy big shot Tetsuya Nomura is a child of Tokyo teen culture, with its habit of deconstructing Japanese tradition and indiscriminately pilfering the trappings of the silver screen America exported to the world via Hollywood, Matsuno is clearly a student of classical Europe. His games explore the dynastic conflicts of the Old World -- the baroque political machinations and the not-entirely-benign influence of religion -- and wrap it in 16th-century aesthetics. No wonder the poor guy didn't fit in.

But in his all-too-brief tenure at Square, he managed to direct two and a half brilliant games. Believe it or not, Tactics was Matsuno playing safe. True, it was densely plotted, and it demanded far more depth of gameplay than console RPG fans had come to expect, and the game could easily take 80 or 90 hours to complete. Yet it was actually a simplified take on his final creation for Quest before the developer was consumed by Square, Tactics Ogre. For one thing, Final Fantasy Tactics only allowed players to control five warriors at a given time, while Ogre's battles saw the hero's party warring in groups of ten. Furthermore, Ogre's exceptional branching plot paths were nowhere to be seen in Tactics; the Final Fantasy take on the tactical RPG featured familiar character dynamics and situations, but players had no control over their hero's path or the ultimate outcome of the tale. 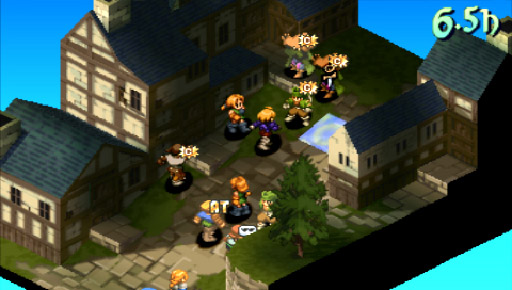 You'd be mistaken to assume that this meant Final Fantasy Tactics was simply a dumbed-down rehash of its predecessor, though. Matsuno's simplifications were made for the sake of added complexity in other areas -- specifically, that of character development. Tactics adopted more than just the Final Fantasy name. In a brilliant twist, it also incorporated an expanded version of the Final Fantasy Job System -- that highly flexible adaptive class-changing mechanic. Tactics actually served as an introduction to Jobs for most Americans, given that the two core titles that had pioneered it (Final Fantasy III and V) had, as of 1998, yet to be officially translated and released outside Japan. In a way, that's a shame: Tactics remains to date the most perfect exploration of Jobs yet seen in the series, and its essential excellence makes even more of an impact once you properly understand how the concept evolved through the 8- and 16-bit eras to this incarnation.

While many hardcore strategy fans decry Tactics' relatively limited scope of combat, the versatility of the Job System obviated the need to have 10 warriors on the field at a time. Tactics Ogre's large battles were borne of necessity, as the game's single-class system meant that only with a sizable party could players hope to have a full repertoire of skills present on the field. Not so for Final Fantasy Tactics; because Jobs allowed characters to train in multiple disciplines and mix and match their specialties, five Tactics warriors could easily do the work of ten Ogre battlers. This made for faster, more manageable battles at the expense of scale -- a fair tradeoff. The significant decrease in difficulty between Ogre and Tactics was caused not by the smaller skirmishes but rather by the decision to keep story-based missions at fixed levels instead of scaling them to the hero's experience level as in the Ogre games; as anyone who's ever encountered a team of rogue monks at Grog Hill can attest, the game's random, scaled encounters can be merciless. 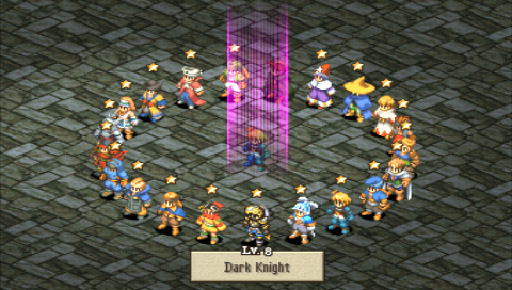 Jobs were brilliant in FFV, but the concept was even more perfectly suited to Tactics's cautious, thoughtful style. Every character was capable of changing his or her class at any time, though advanced classes beyond Squire and Chemist had to be earned individually. Battling while training in a given class netted that warrior Job Points that could be invested in class-specific skills, be they active, passive, or reactive. With a few abilities under their belt, that character could then switch to a new class while using the previous Job's powers as a secondary skill set. The sheer number of possible combinations makes every party unique, and every player quickly developed a favorite style. Some preferred to use complementary abilities, such as giving a normally slow Summoner the Time Mage's Quick support ability to enhance their effectiveness. Others went for more devious combinations, such as giving an Engineer armed with a gun a Knight's Break skills to allow them to shatter their foes' armor from anywhere on the battlefield. Even Jobs that didn't seem intuitively useful, such as the Mediator or Oracle, could give life to some devastating allies in the right hands -- or, at the very least, could offer a canny warrior a palette of exceptional support skills to supplement their inherent powers.

Tactics did for strategy RPGs what Halo would do for first-person shooters a few years later: Take a well-defined genre and make it palatable for a wider audience by streamlining certain aspects and playing up others. It certainly helped that the game bore the Final Fantasy name; the immense success of Final Fantasy VII half a year prior caused many people to sample this chess-like odyssey who might never have even considered playing such a slow, involved game otherwise. In this sense, Square went back even further into Matsuno's beloved European history to antiquity -- a little thing called a "Trojan Horse." Improbable though its success may have been, there's no denying the Final Fantasy name drew many people in, while the meaty game mechanics and intriguing (if poorly translated) story caused them to see it through to the end.

Final Fantasy Tactics was remade for PlayStation Portable nearly a decade after its debut and actually marks one of the rare occasions that a Square-published remake turned out to be superior to the source material. Not only did the story's fine points come through more clearly in the new localization -- I had no idea how important Queen Ruvalia was until the remake, even after two playthroughs of the original version -- but it also offered a few much-requested features like head-to-head multiplayer and the ability to kill that racist little rat bastard Algus (or Argath, as the case may be) a second time. Oh, and it had Balthier. Still, no matter how you play Final Fantasy Tactics, it's a masterpiece -- perhaps not the greatest strategy RPG ever, but definitely the one that best combines depth and accessibility.