Assassin's Creed is the Elvis Presley of video games. Not to belabor the music comparisons that I bludgeoned in my "favorites of '07" write-ups, but seriously, I can't think of another game in recent memory that began with so much vitality, so much visceral style, yet degenerated into such a fat, sloppy, embarrassing mess by the end. Granted, the very final sequences -- the last two assassinations, I mean, not the head-slappingly obvious plot twist -- did a bit to redeem the game, simply because they cut out the fat and went right for the good stuff. So I guess a better comparison would be "the Elvis Presley of video games, if he had totally gotten into tae bo for a year or so before checking into that great Heartbreak Hotel in the sky."

I've mentioned before that Assassin's Creed had a solid shot at being the best game of 2008. Alas, it was released in 2007. It always seems such a waste to see such a big-budget, ambitious game that clearly didn't quite make it through the full development cycle -- it does so many things right while failing in crucial areas, meaning that all of the effort and money invested in the good parts were ultimately squandered. I hold out hope for the sequel, but no amount of patches or downloadable content can ever transform Assassin's Creed into anything more than a shadow of what it should have been. 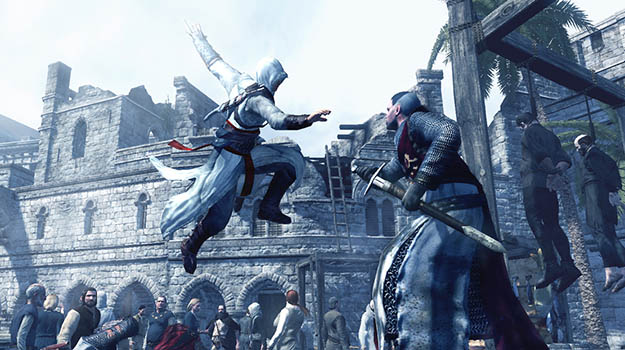 It's a brilliant framework, an interesting mix of near-future and historical storylines. Simply setting the bulk of the story in the Holy Lands during the Crusades is fantastic -- a welcome change from the usual video game clichés. The quiet, intense hero is the furthest possible thing from a bald space marine, and I've spent a fair amount of my free time in the past week reading about the Templars and Hashshashins and Hospitaliers and the Fourth Crusade...just soaking up the ambience, really. The cities of Jerusalem, Damascus, and Acre are all gorgeously rendered, a bit obvious in their copy-and-pasting at times but nevertheless so much more organic and real than any other sandbox world I've seen that it's hard to complain. And the control scheme, while unconventional, is generally excellent, allowing effortless excursions along the rooftops and seamless shifts between low-profile stealth and all-out combat.

The stealth aspect is easily the game's greatest ambition, even more profound than the convincingly unconventional setting -- the concept of social camouflage. Stealth games are normally about hiding out of sight, whereas Assassin's Creed is about hiding in plain sight. Metal Gear games always do a little of this; you almost always have a sequence that involves parading in front of bad guys while wearing their gear. Keeping your distance without looking like you're keeping your distance. (You know, flying casual.) But those are always limited in scope, a single event after which you lose your balaclava or everyone knows to look for the dude dressed like Raikov or whatever. It's a sequence rather than a valid tactic. Assassin's Creed makes it the focus of the game. And it almost works! 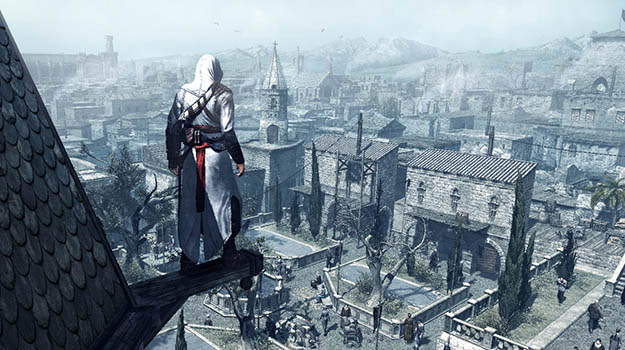 Ah, but "almost" is such a loaded word. The camouflage (aka "blending") system is a good idea that doesn't quite work out. The notion is that by acting inconspicuous, virtual hero AltaÃ¯r can blend smoothly into crowds. In reality, it comes off as pretty silly most of the time. If you stroll casually up to a guard, he'll look at you with suspicion. If you inch toward him as if you're praying, though, he totally ignores you. Which is utterly ridiculous when you shuffle penitently toward a soldier stationed in the middle of an enemy encampment in the middle of the wilderness and he doesn't even blink.

It's even worse later in the game, when you begin running into the annoyance characters, the beggars and vagrants who inexplicably target only AltaÃ¯r to harrass. This element of randomness is completely infuriating when you're trying to lay low and some drunkard decides to lunge and hit you (but only you, of course) and suddenly every guard in a 50-foot radius decides to attack you, not the drunkard. Yeah, it's supposed to add some challenge or whatever, but it tends to be unpredictable and arbitrary...and when the streets are filled with dozens of the nuisance characters at a time, who do the same schtick regardless of which city or quarter you're in, the whole thing just feels cheap, contrived and -- yes, the dread word arrives -- repetitive.

Because ultimately, the biggest failing in Assassin's Creed is that the developers ran out of things for you to do. The investigation and assassination process is interesting the first few times you do it. The ninth time, it's much less so. Especially since the ninth time through is exactly the same as the first, except that you have to fight off more guards at once, beggars are more likely to get up in your face while you're going about your business, and the crazy guys are more likely to shove you into the path of a patrol. Ramping up difficulty through increased irritation is, in fact, not an endearing design technique.

The apologist response to the grating repetition of the last half of the game is to play the game in small sessions -- fair enough, since that's my apologist response for Odin Sphere?. It's not quite the same thing, though, since Odin Sphere has natural chapter breaks and features cyclical repetition as its Rashomon-style device to present a single tale via multiple perspectives. Creed is just one guy doing the same thing over and over again while pushing against an ever-rising tide of frustration. 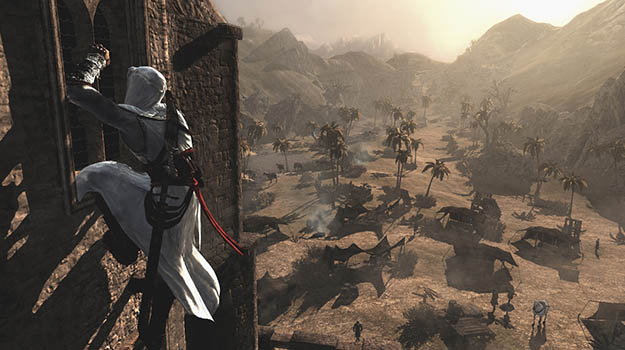 The terrible, terrible checkpoint system factors into this, too; Creed lacks any sort of manual save feature, just automated checkpoints triggered by a number of in-game events, such as completing a task or collecting the obligatory "hundreds of hidden objects" element, flags. Die and you return to the latest checkpoint -- which is fine until you've collected all the flags and cleared all the assignments around a particular sticking point, meaning there's no way to create a checkpoint near the trigger for the event in question. So it's back to the bureau if you die -- and most of the time, the only real solution to failing an investigation is to die, as the bodies you've left in your wake remain strewn about the street until you respawn, putting guards on full alert and making each subsequent effort that much harder to complete. So expect to trudge back across the city from the Assassin's Bureau every time you screw up, which of course happens ever more frequently as the game throws more random crap in your way in the latter portions of the game.

This is especially irritating seeing as the cool, dramatic camera angles during combat are the single biggest cause of unfair losses. I lost count of how many times I took a few cheap hits because I defeated a guard and the camera swept around cinematically, moving the entire skirmish behind some object in the foreground, or moving the next guy to attack off-screen or directly behind AltaÃ¯r and making it impossible to see or defend against his moves. The whole thing reeks of being rushed to the market, of publisher-induced corner-cutting. And the cut corners are sometimes inexplicably strange, too, like the fact that the dozens of "save the citizen" side missions end with one of maybe eight different dialogue clips...but while the dialogue is the same, you eventually notice that these same lines are being read by different actors. Would it have been that much more trouble to have given the different actors something unique to say?

I can't help but think that all of these things -- the janky battle camera, the redundant objectives, the limited hazards, the camouflage system that would often be laughable if it weren't just as frequently infuriating -- are things that could have been completely resolved with a little more development time. The sequel will likely be fantastic, if it's allowed to be. But will it? The current console generation looks to be the one where developer ambition meets publisher profitability in a head-on collision of art versus business. The games end up a mangled wreck, and it's the gamers who are out the $60 premium.

Fortunately, Creed isn't totaled by any means -- the frame and body are in great shape. But a bit of detailing is definitely in order.