Were one to ask a wise man how he might improve upon the time-tested formula of Dragon Quest -- that's Dragon Warrior for you NES fans who can't keep up with the times -- surely no one would expect the answer to be, "Go and hearken unto the brave programmers of Capcom, and there you shall see Enlightenment!"

No, that's the sort of answer that gets one laughed out onto the street, especially in America, where Capcom is regarded as the makers of the sublime Street Fighter II? and many other action games. Operative word: action. "Capcom? Make an RPG? Ha!" is the response that would be spat into the poor, beleaguered wise man's face.

Yet that wise man's wisdom rang true...although even Capcom's American branch would have had its doubts. But it's true: its debut RPG, Breath of Fire, was essentially Dragon Quest 2.0 -- fitting, since Breath's Japanese subtitle was "Ryuu no Senshi," which means, roughly, "Dragon Warrior." You know, the name that Dragon Quest was forced to adopt for its first fifteen years in America. Unsurprisingly, the "Dragon Warrior" subtitle was dropped for the game's American release -- along with Capcom, strangely enough. In a fit of madness, Capcom decided not to release Breath in the U.S., leaving Squaresoft to pick up the slack.

On the surface, Breath was essentially the same as every DQ clone to precede it -- though a few of its elements didn't quite jive with that pedigree.

Chief among them was fishing. 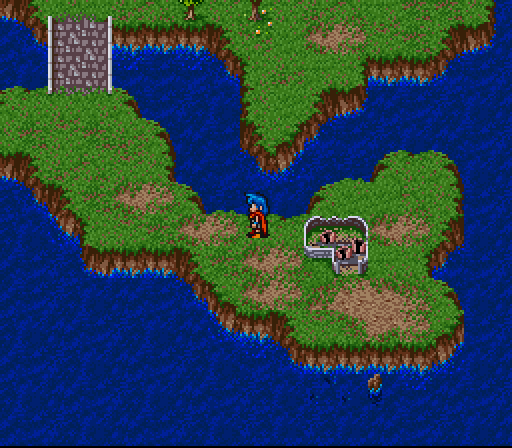 While it had its share of innovations, the fishing portions of Breath of Fire set the stage for what would prove to be some of the most in-depth and developed mini-games ever to grace an RPG in later installments. Alas, fishing in this game is about as interactive as watching paint dry, and its only real value comes from using certain fish to complete side quests and obtain the ultimate weapon and armors for the (sub)titular hero.

Which brings us to another of the reason this game is basically "Dragon Quest Evolved." Transformation is a major theme of the game -- and of the series, really -- and the main character Ryu is capable of transforming into several different types of dragons. These represent the different elements in differing stages of power, along with three special forms, one of which is hidden away and is required in order to get the game's true ending. Not only are the later forms incredibly powerful, but they're also pretty cool-looking...especially for mid-SNES-era graphics.

But if you think the hero's the only one who gets to enjoy transforming, no, you're wrong! You also have Karn, the thief who can merge with other characters in order to create some badass forms that rival some of Ryu's more powerful dragon forms. And then there's Nina, who begins as a really wimpy healer but experiences a sequence towards the end of the game that boosts her power through the roof and makes her one of the strongest untransformed characters in your party. Then there's the final boss Tyr, or Tyria, as she's called in later entries of the series.

As in any other DQ-esque RPG, your party consists of several members -- eight, to be precise -- all of whom have distinct traits and abilities. Including field abilities, notably enough. Now, interacting with things outside of battle wasn't anything new for the genre, but Breath of Fire's take on the concept was a step in a slightly different direction. Six of the game's characters possess different field abilities. Karn can unlock chests and doors or disarm traps, while Ox can move boulders out of your way. The most impressive (and useful) ability by far is post-upgrade Nina's bird transformation, which lets you fly wherever you want over the world map. 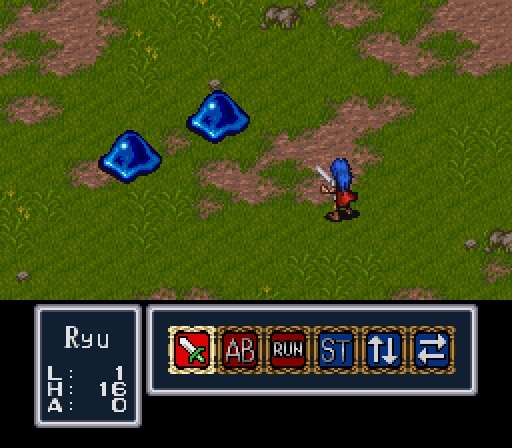 That 16-bit hallmark: a fake 3D perspective. Pretty pictures are a bonus.

Breath of Fire's battles are also "evolved" in their own odd way, taking place in an odd sort of pseudo-3D isometric perspective that would be a hallmark of the series until Dragon Quarter (which broke all the rules). It's a strictly turn-based affair, yes, just like Dragon Quest. Rather than operating via a text box and a handful of monster icons, you instead make your selections from a clever little bar of descriptive icons on the bottom of the screen while and your four chosen heroes stand in a line across the bottom-right section of the field. Since it doesn't ape Dragon Quest slavishly, combat isn't bogged down by descriptive text -- even your hit points and that of your enemies is presented in meters. Combat is very fast, a welcome change from the usual DQ knockoffs, and while it's still subject to random encounters, you can make them fairly painful with an auto-battle option...which is obviously recommended only against weak enemies in can't-lose battles. As in Dragon Quest, magic is definitely the knockout punch for combat and is best reserved for bosses and tough fights. Another helpful innovation is the ability to swap out party members on the fly in battle, allowing you to replace a fallen comrade if you don't have the ability (or time) to bring them back to life. 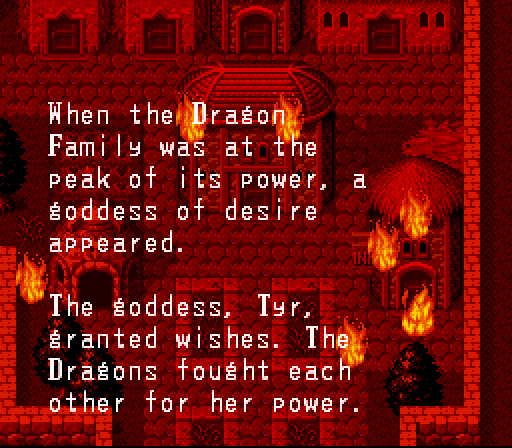 See this text? Trust us, it's so much better than BoFII's.

Ted Woolsey localized BoF into English on behalf of Squaresoft, since Capcom didn't feel like handling the localization and publishing efforts in Europe and America. That's probably just as well given Capcom's localization track record. Breath's localization is pretty decent, far better than the hackjob inflicted upon Breath of Fire II. The whole killing God bit has become a fairly standard trope in Japanese RPGs, but it was fairly new in Breath of Fire and had a nice twist to it: here it's the humans who screwed up and misused the power of God, and so it's up to Ryu and crew to clean up the mess. It lends the game a morally ambiguous tone that remains throughout the rest of the series in one form or another.

So no, Breath of Fire isn't a revolutionary game. It has solid artistic, technical, and musical values, yet it's not the kind of game that breaks down your door and demands that you take notice. It quietly changes and fixes things in a stagnating formula, much as Bungie did to the first-person shooter genre with Halo. Evolution rather than revolution is the motif here -- evolutionary design is what gives the game its essential balance. In fact, the original Breath of Fire holds up far better than any of its sequels (save for the revolutionary Dragon Quarter), despite their further technical advancements and gameplay innovations and other additions to the series. It's a shame the game hasn't been re-released on Virtual Console -- most likely due to copyright issues between Capcom and Square Enix -- and the GBA port is such a slipshod effort. 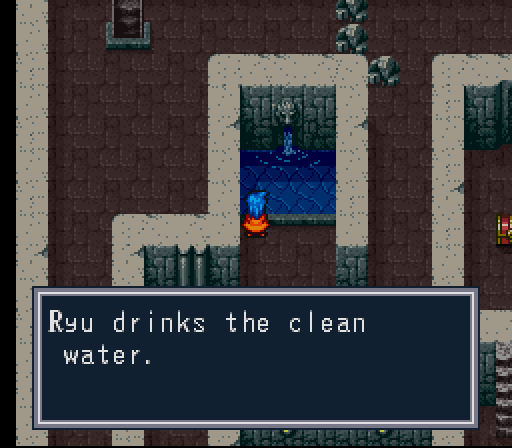 This game's a drink of clear water, especially compared to modern RPGs.

Breath of Fire makes a strong argument for simplicity in game design, much like Ico. Its aim isn't to throw a bunch mini-games, side-quests, and other assorted gameplay devices in your path to distract you with busywork for forty hours or more. Sure, it has its share of all of those elements, but in moderation -- the developers went for quality, not quantity. This isn't a bloated epic? where the side dishes take up more time than the main game, and the main game isn't precisely an exercise in gluttony either. Most people can probably plough through Breath of Fire in twenty to thirty hours, acquiring most of the secrets and extra goodies in the process.

So again, we have yet another example of refined game design over over-designed bloat. Too bad the rest of the series forgot to follow this example, adding complexity but not necessarily substance and endlessly reprising the core plot device of a fire-breathing dragon versus angry supreme beings.

Thanks to VGMuseum for the screens