Ah, Breath of Fire II. There's much to be said for -- and against -- sequels, and the second Breath of Fire could be the poster child for what not to do with'em. The first game in the series was a balanced and streamlined take on the Dragon Quest formula, with more interesting graphics, a friendlier interface, and a brisker battle system. The sequel...not so much. Breath of Fire II arrived about a year and a half after its predecessor, and while the graphics are something of an improvement, Capcom's second Super NES RPG is nowhere near as pretty as its late SNES-era peers. Worse, the game suffers from bloat and poor design.

The gameplay sees a few changes -- though most of them decidedly not for the better. Hunting, formerly a minor affair that mainly offered a means by which to acquire free healing items and cash, has been made more difficult -- and, frankly, almost worthless, since animals run away the moment you come within Bow and his (incredibly slow) crossbow's range. The abortion that was hunting here could well explain why it doesn't show up as a player mini-game in later editions.

Other field abilities are still present in the game, but since Breath of Fire II doesn't allow you to take your entire party with you while adventuring. This means you can find yourself stuck in spots where you need to go back to home base and swap out combat-proficient characters for some scrub whose only real purpose is to get past a single gimmicky spot in a dungeon. The high encounter rate and general level of difficulty make this compulsory backtracking an extreme pain.

Battles sport a bit of a makeover from their original format -- an ugly makeover, as the streamlined interface from the first game has given way to a cookie-cutter text-and-numbers based affair which just feels clunky and inelegant compared to what it's "improving" on. Also, every character has been given his or her own unique (and mostly useless) individual commands, aping Final Fantasy yet somehow managing to screw it up. The blue-haired main man still gets his dragon transformations, but where the first game required you to spend Ability Points to transform and to stay that way, the sequel forces you to expend all Ryu's AP in order to change, making it a one-time crapshoot. This is another of II's innovations that didn't survive into any later sequels. 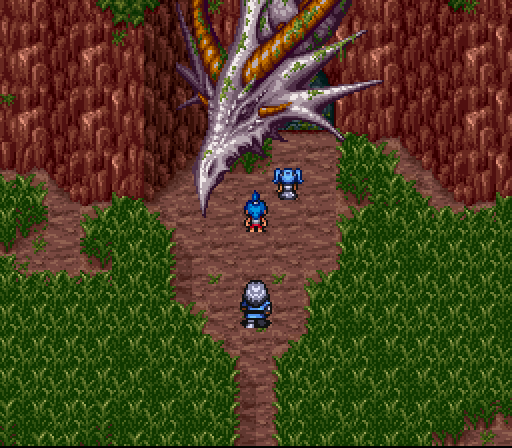 Consider this the best part of the game. It's the intro.

Not all of Breath of Fire II's changes are for the worse, since it does sport a number of improvements. Well, one or two, anyway. (Those are numbers, right?) Fishing is greatly expanded in this entry to become more than simply pressing a button next to the fishing hole with rod and bait equipped. As a mini-game, it still pales next to the implementation seen in III or IV, but the signs of potential greatness are hidden within its rudimentary form. Its one other clever innovation is the Shaman system, which allows you to fuse your characters with various mentors you meet throughout the game world. Doing so can increase their powers and even change their appearance. It makes for a sort of midway point between Karn's transformations from the first game and the master system from III and IV -- and as with Karn's transformations, these aren't permanent fusions. Something called the Dragon Tear system was added as well; this basically gauges your popularity and relationships with your comrades, but doesn't really offer much benefit outside of a few isolated goodies for being a nice guy. Which makes it kind of like the music for the game. 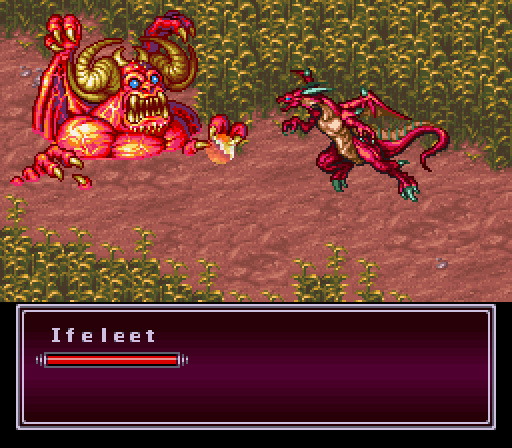 Yeah. The music. It's just there, for all intents and purposes. It's unobtrusive and it stays in the background, and the other parts of the game are far more memorable, though not always in a good way. So at least your ears won't bleed out. Unlike your brain. 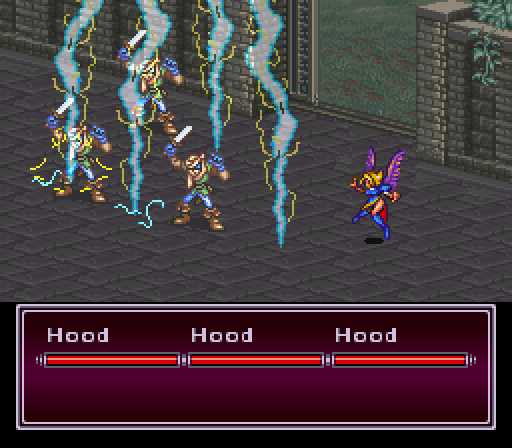 I think that's supposed to be Hoodlum.

Of course, the topic of brain damage brings us to the lovely localization efforts inflicted upon the game's America release. Capcom didn't localize the first game but elected to bring Breath of Fire II to the U.S. themselves, presumably because the first one moved pretty well in stores. But maybe they should have left it in Square's hands; Capcom didn't so much drop the ball as punt it into the player's family jewels. Simply put, Breath of Fire II suffers from a bad, bad, really bad localization. And not the special Zero Wing brand of "so horrible, it's awesome" -- it's simply bad, to the detriment of the game. Basic gameplay elements such as commands, items, and menu entries all have nonsensical translations or inscrutable abbreviations. And that's to say nothing of the huge number of textual, grammatical, and consistency errors in the translation itself. It's not uncommon to find towns being being referred to by several different names or by one name spelled several different ways -- a criminal offense in a RPG, where getting from point A to point B requires a coherent script and directions. The GBA version fixes a number of the more egregious localization errors. But even then, that's not saying a whole lot, considering the game as a whole.

All of this adds to up to make Breath of Fire II a damn shame. I still remember being a little kid wandering through the local Toys R Us, gazing with desire at that eighty-dollar price tag and knowing I'd never get to play it. And all of that longing for what? A clunky, poorly designed, and deeply flawed game that would have benefited greatly if someone had paid more attention to what worked in the original game and not tried to pile on the "enhancements." The real shame is that somewhere, deep down, now I wish I'd never played it to begin with.

Thanks to VGMuseum and Dragon's Tear for the screens and artwork