Capcom's pretty famous for milking its franchises, often well past the point where they're simply milked dry and on to rigor mortis. One need look no farther than the Blue Bomber, once AAA-quality flagship material and now surplus scrap, for chilling, final proof. To make things worse, the big C's habitual sequels tend to suck, or at least to spread a few great ideas into a thin paste of mediocrity. Only when the suckiness begins to affect sales and really puts the hurt on the bottom line does Capcom pull out the stops and either kill the franchise or finally do something new with the series. We've yet to see if Street Fighter or Mega Man will win that particular race yet, assuming there can ever truly be a winner, but certainly it didn't happen for Breath of Fire until the renaissance of Dragon Quarter.

The third entry in the series, bearing the uninspiring name Breath of Fire III (curiously eschewing Capcom's love of the subtitle) was definitely part of the problem, not the solution. The third Breath of Fire is generally regarded as running neck-and-neck with the second game for the distinction of worst entry in the series, mostly because it was a sort of plodding crossover between its Dragon Quest roots and modern (post-Final Fantasy VI) RPGs that involve much fetching and a whole lotta questing. In truth, Breath of Fire III isn't a bad game -- but it's not a particularly great game, either. At the very least, Capcom had the decency not to repeat the disastrous design flubs that dragged down Breath of Fire II, theoretically good storyline be damned. Unfortunately, they made an entirely fresh batch of strange design decisions for III, breaking all-new and different portions of the game in the process. The end result was more of that mediocre paste that Capcom specializes is, and one of the more boring RPGs to date. 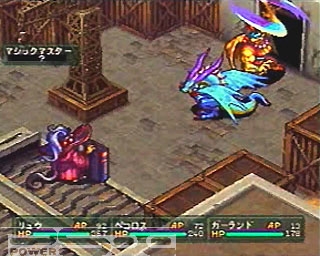 Welcome to the land of sprites and bad 3D. Try not to let your eyes bleed all over the place, will ya?

Graphically, the game is a mix between mid-PS1-era 3D graphics and some decent 32-bit spritework -- something Capcom excelled at. The characters, monsters, and NPCs are all bitmaps, while the world map and field areas are all built of isometric polygonal squares. Nowadays, the result is something of a jaggy, eye-bleeding mess, but the texture work is decent enough that it's still playable. Which is more than you can say for Final Fantasy VII.

The story, such as it is, is a vague mess that feels a lot like a poor blend of the plot from the first two games, transplanted into a vaguely steam-slash-runepunk world. Evil goddess rules the world, dragons are mistaken for evil beings, yadda yadda yadda. As in the last entry, Breath of Fire III features multiple endings contingent on how you deal with the final boss, but the superficiality of the plot in the face of the game itself ruins any dramatic tension that might have existed. There are essentially two reasons for plot in offline RPGs: a loosely-veiled excuse to go monster-hunting, or telling a story whilst slaying yon monster over yon hill. The difference between the two is usually the presence of cut scenes and something resembling an actual story.

The odd thing about the game is that it has cut scenes (and even a modest amount of character development) yet little in the way of actual plot or story. Apparently the designers never really decided whether they wanted a dungeon hack or another ham-fisted polemic about the evils of Western-style religions, and as usual, it's the gamers who suffer for their indecision. Hints of some grand, overarching plot are parceled out in the very beginning before Ryu grows up, and again at the end. But the big sixty-hour stretch in the middle is comprised almost entirely of tedious dungeon-diving and fetch-questing. That's not even mentioning the lame-ass coliseum sequence and the literal Desert of Death at the tail end of the game, as the sheer tedium involved to reaching those points may be lethal to the untrained.

Which is a bit of a shame, since the actual game itself, aside from the dungeons and that damnable desert, is a fairly decent RPG in strictly mechanical terms. One of the highlights of the series has always been Ryu's dragon transformations, and Breath of Fire III offers the deepest system in the entire series. By the end of the game, he has access to eighteen different dragon "genes" and the ability to combine up to three of them at once to form different types of dragons, many with a wide range of abilities. The cost-trade-off for III switched back to the original game's formula of consuming a set amount of AP to transform and remain transformed; cost in this case is determined by the number and type of genes used. Field abilities are back, and are of varying usefulness, with the most useful being Momo's gun and Rei's ability to steal. Rei can also transform into a weretiger later in the game, making him a powerful if somewhat uncontrollable asset. 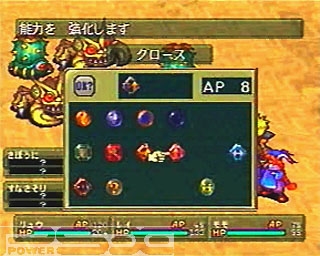 Combat takes a few steps back towards the simplicity of the first game with the re-introduction of health gauges and icon based commands; unfortunately, the ability to swap comrades out on the fly is still MIA. There's even a hint of Final Fantasy-style blue magic in that you can learn skills by using the Observe command in battle; in fact, this is the only way to acquire certain unique and handy monster skills. A master system similar to Breath of Fire II's allows the customization of the growth and skills of eachcharacter -- but it's also a somewhat risky proposition as the skills and stat boosts were tied into leveling up, making it entirely possible to create a party that knows a ton of skills but lacks the necessary stats to use them effectively. The various masters are scattered all over the game world, resulting in tons of annoying backtracking; swapping masters means going back to a particular master to ask them to take on a character as an apprentice. Keeping track of what skills are learned and when is practically impossible without the aid of a guide to prevent precious level boosts from being squandered. Needless to say, the encounter rate is also really high, just like in the second game.

World navigation is performed on a simple isometric map. Don't expect to do much exploration, as the world map has a handful of strictly-defined paths to be wandered and not a whole lot of secrets squirreled away. The most excitement you'll experience is when an exclamation point pops up above Ryus head as you're wandering around, indicating an opportunity to enter a monster field for a chance to fight and perhaps discover an odd bit of treasure. There are also faerie rings and fishing spots scattered around for access to the two biggest mini-games in the game: the faerie town and, er, fishing. Breath of Fire III's faerie town is the full realization of the rough-but-promising Township side-quest in the second game, and your new flying friends can build all kinds of shops to help you find neat gear as a reward for investing a bit of time into the endeavor. The fishing game is, well, fishing, not particularly different from the fishing in the previous games besides actually being mildly entertaining and somewhat more interactive. Plenty of other mini-games are scattered throughout the adventure, but they tend to be minor affairs that only pop up once. That's good! Unfortunately, they're almost always compulsory. That's bad. 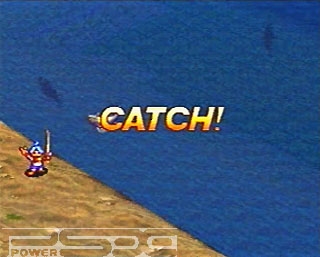 Hey, it's fishing, and somewhat entertaining. How droll.

Music and sound are middling affair, like in the other two games, and just stay in the background with a sort of ill-fitting elevator jazz style that seems a poor fit for a fantasy-steampunk adventure full of dragons and whatnot. Breath of Fire III also marks one of the first games to offer a full-on Japanese pop song over the ending credits, at least as far as RPGs on this side of the Pacific go.

So ultimately, the best word to describe Breath of Fire III would be "boring," and its determined mediocrity and insipid story certainly don't help matters any. Had there been a more unifying plot, or more of a reason to slog through endless random battles other than finding bauble A to open door B, it might not be so boring. In its favor, it did introduce a number of gameplay ideas that would be further refined in Breath of Fire IV (and abandoned in Dragon Quarter, but never mind that). And master system aside, it managed to fix a number of the problems that made Breath of Fire II such a mess. Yet for all the things it does right, this mundane RPG can't reach escape velocity to power away from its own failings and ultimately plummets back to the surface, a fiery wreck of tedium.

Thanks to vgm, IGN and Dragon's Tear for the screens and art