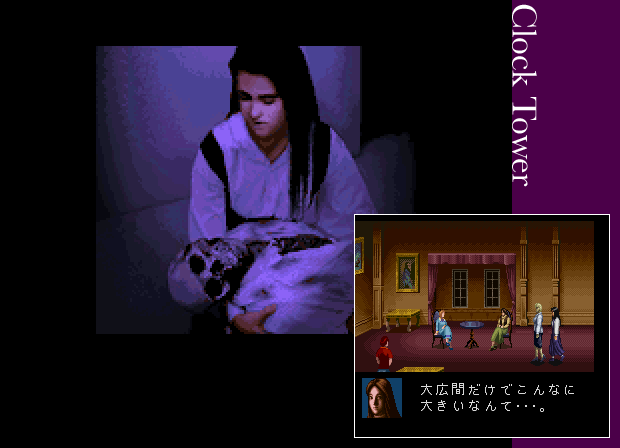 Most peoples familiarity with Clock Tower in the U.S. comes from Clock Tower 3, developed after the series was sold off to Capcom, who made something reasonable out of the series. Others are more familiar with what they assume to be the original game, Clock Tower, for the PlayStation. That game is in fact Clock Tower 2; our Clock Tower 2 was, in Japan, some numberless side game, so eventually it all works out. The original Clock Tower was a much more competent game for the Super Famicom, a nicely polished adventure game with a horror movie aesthetic going on. What makes it so significant is that it isnt just based on horror movies in general. Its based, very specifically, on Dario Argentos Phenomena, sometimes known as Creepers for some odd reason, and its as blatant as these sorts of things get.

First off, the main character is Jennifer Connelly. Not just a character clearly based on her; they straight-up digitized a photo and stuck it in the status bar, with the same name as her character from the movie (Jennifer, conveniently enough). The music is based on the distinctively awesome techno sound Argentos movies typically feature. The plot is roughly the same, with most of the same characters, and what additions are made are ripped from other movies by the same director. Of course, while it does have Jennifer Connelly wandering about, trying to deal with a creepy weirdo going around murdering people with a pair of scissors, her allies are sadly missing. The end game involves the use of various magical artifacts to save the day rather than enlisting the help of a telepathically controlled swarm of insects and Donald Pleasances helper monkey. This may mark the first time in fact where a game based on a movie differs due to the lack of various aggressive animals rather than their presence.

The game itself is largely a point and click adventure sort of thing, playing not entirely unlike Maniac Mansion, or a modern Telltale game. The player explores around, looking for clues, and periodically having to flee from the inherently goofy but still fairly creepy, particularly for the platform, Scissorman. Survival at these times depends on some combination of running, hiding, or just plain shoving him away, not unlike Silent Hill: Shattered Memories. Rather than a health meter, survival in these situations becomes more difficult based on the protagonists current level of stress, which shoots up when making particularly unsettling or grizzly discoveries while exploring, not unlike Indigo Prophecy.

The original Clock Tower is ahead of its time in many ways, really. In addition to all those influences cited, the notion of being chased by an unkillable adversary whose appearances are largely random was later used by Resident Evil 3. It was also one of the earliest games to feature multiple endings, with nine in total, achieved through a combination of effective strategy, and randomization of things like which NPC falls into which role in a given playthrough. Various points at which a panic button must be mashed to survive could even be considered a precursor to the current fad of QTEs, although really it was more akin to the joystick-waggling required by certain arcade brawlers to escape from holds.