It seems so obvious in retrospect. Popular mascots. Go-karts. Anyone with a half semester of freshman Economics under their belts should be able to see that these are clearly complimentary goods. While the popularity of mascot-based games has seen a marked decline in recent years, theres been no shortage of entries in this genre since Super Mario Kart first touched down in 1992. Super Mario Kart was the catalyst, the modest bit of genius that laid the groundwork for every kart racing game to come, for better and for worse. It also established the now-commonplace practice of throwing every character in the Nintendo stable into games involving disparate, sport-like scenarios.

Mario Kart was able to so forcefully and unshakably plant the seed for the kart racing genre thanks in part to its brilliant simplicity. At its core, the game is very similar to Nintendos earlier Mode 7 racer, F-Zero, as both games skew a background image to ape a 3D effect. Each of the eight playable characters differ in acceleration and top speed, as you might expect from a racer. Projectiles (like the red and green turtle shells) and banana peel traps help to convert what would otherwise be a simple race to the finish into all-out warfare. Many find the AI has an elastic, rubber band feel, meaning that the game endeavors to pull players doing well to the middle of the pack while also projecting lollygaggers to the forefrontinfuriating, though rarely game-breaking in this first iteration. 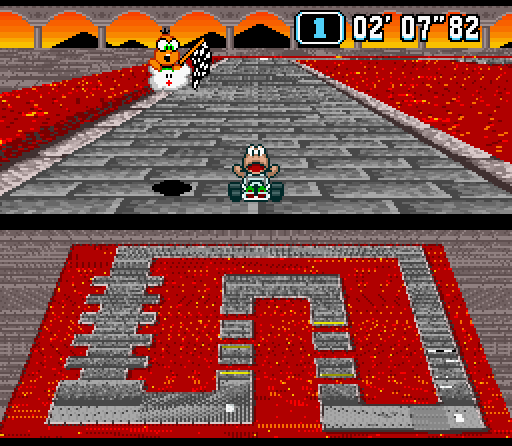 Though it may not be what the series is remembered for, Super Mario Kart also featured something called Battle Mode, which eschewed racing entirely to focus on the fights in arena-like settings. Id hesitate to say that this means Nintendo also single-handedly paved the way for car battling games like 1995s PlayStation hit Twisted Metal, but I can only imagine someone at Sony was taking furious notes.

It may not be surprising given that this is a Nintendo game were discussing, but Mario Kart succeeds so completely in part due to its easy, pick-up-and-play nature. A multiplayer game needs to be immediately intuitive to those who may not necessarily have played the game to death in the manner in which the de facto Player One likely has. The background scenery in most interim sections has push B! scrawled in graffiti to help push players along, and at its most basic the racing controls equate to go and shoot. There are nuances to the game, to be sure; this was before the hate-it-or-hate-it snaking mechanic that seems to have become a staple of modern Mario Kart entries, but hopping, sliding, and item use are concepts easily grasped and can be shrewdly applied.

Super Mario Kart ushered in the era of kart-based dreck and drivel, that much we cant deny. Look, Im not exactly thrilled that we live in a world where games like Crash Tag Team Racing exist, but I dont think we should be angry. The next time you deliver a red shell directly into the face of Peachs stupidly voiced mushroom retainer, ask yourself: Was it all worth it? I think youll find the answer is a tearful, solemn nod.