If the rhythm genre started with PaRappa and was nurtured by Konamis Bemani series, then it follows that Harmonix shepherded the format to superstardom. But back in 2001, they were still an unknown trying to capture the vibes of their Japanese forebears and package that participatory element for American audiences in the form of FreQuency. And while FreQuency and its sequel Amplitude were ultimately commercial failures, they set the stage for Harmonix to take the rhythm genre by storm, succeeding with Guitar Hero where Konamis efforts had failed.

The key, Harmonix discovered, was simple: recognizable music by popular artists. The Bemani series, for all its fantastic tracks, was full of music made in-house, dosed liberally with Japanese-flavored Eurobeat techno. FreQuency, on the other hand, had music from the likes of No Doubt, Paul Oakenfold, Orbital, BT, and nerdcores favorite electro band, Freezepop. (Incidentally, Freezepops fame rests on their debut in FreQuency, the phenomenal "Science Genius Girl.")

FreQuencys gameplay was unique and very much of its eraflashy neon colors, tracks arrayed in a tube, and a vibrating aesthetic reminiscent of the techno scene of the late 90s. What made it compelling, however, was the fact that the player ultimately chose which tracks to activate at any given time, changing the texture and tone of songs on the fly. No Doubts "Ex Girlfriend" took on decidedly darker tones when only the Vocal and Bass tracks were turned on, and Powerman 5000s "Danger is Go" was a fantastic, stripped-down rock song sans vocals. Amplitude built on this with an even more pop-ready track list, and Harmonix was off to the races. Still, for a snapshot of turn-of-the-millennium electronic and rock music, and for being the bridge between Beatmania and Rock Band, FreQuency is a fantastic game to delve into. 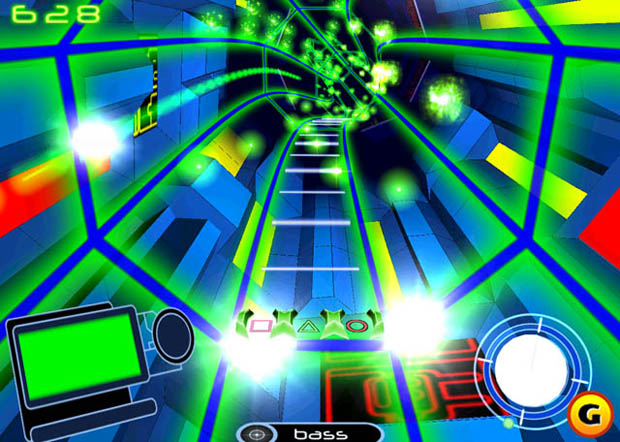