Would it be fitting to call Nintendo the Once and Future King of videogames? The company rose to staggering heights in the 80s and early 90s, riding to fortune on the backs of an Italian plumber, two consoles, and a handheld. They may have slipped with the Nintendo 64 and GameCube, but their fall from grace was short-lived -- the combined sales of the Wii and DS ensured they werent down for long. It seems to be a pattern for Nintendo: for every massive success, they slip a little with something that doesnt quite pan out. Of course, games are a business, and you cant win em all. For every Nintendo DS, theres a Virtual Boy; for every Virtual Console, an e-Reader. And, sadly, for every Four Swords Adventures, there is a Nintendo GameCube Game Boy Advance Cable.

The idea behind the connectivity concept was undeniably clever -- when gathered together, the players would march around the overworld sharing a television screen, and the GameBoy Advances display would take over when they slipped into a cave or interior room. It even worked well, and made the competitive multiplayer surprisingly fun by eliminating the cheating opportunities of splitscreen play. The GBA screen was put to better use with Four Swords Adventure than it was in Final Fantasy: Crystal Chronicles, but both ultimately suffered the same fate. With a barrier of entry so high, they were destined to be played and loved by a tiny percentage of gamers.

Four Swords Adventures expanded on a multiplayer bonus from the GBA release of A Link to the Past. The original Four Swords was addictive and brilliant, offering up the traditional 2D Zelda gameplay to a group of players. It was a fast-paced combination of puzzles and combat best described as competitive co-op -- most of the challenges took teamwork to overcome, but everyone was out to hoard the most rupees by the end of each stage. 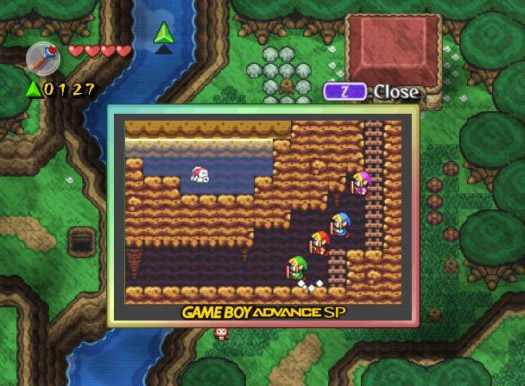 Each dungeon housed a key necessary to reach and defeat the evil sorcerer Vaati, but the quest wasnt entirely straightforward. It took multiple playthroughs to collect enough rupees to earn the Gold keys that would unlock the final confrontation with Vaati and the true ending. Sound repetitive? It wasnt, because every dungeon featured randomly generated elements that kept things fresh. The game even reacted to the number of Links in play.

Which brings us to Four Swords Adventure. Here, the quest is longer, playing out across eight portions of Hyrule split into three separate stages. The graphics mixed the colorful, classic world of A Link to the Past with even more vibrant sprites and effects from Wind Waker. Classic items like bombs, Rocs Feather, boomerangs and bows are all accounted for, and a few familiar faces like Talon and Malon (and, of course, Tingle) show up to lend a helping hand.

Four Swords Adventure takes the concept of four Links to heart, making it a constant, integral element of the gameplay. No matter how many people are playing, there are always four Links on screen. The extras dutifully follow the live players, glued beside them in formation, attacking and moving in tandem. This allows for some interesting puzzles youd never see in a normal Zelda game with only one controllable character, but it also highlights FSAs greatest weakness -- its a completely static experience. There are no random dungeon elements that change the quest every time, no puzzles that morph to accommodate the number of players. Even though Four Swords Adventure offers a richer, deeper experience than its progenitor, Nintendo missed out on an opportunity to make one of the most fun, endlessly replayable co-op games of all time. 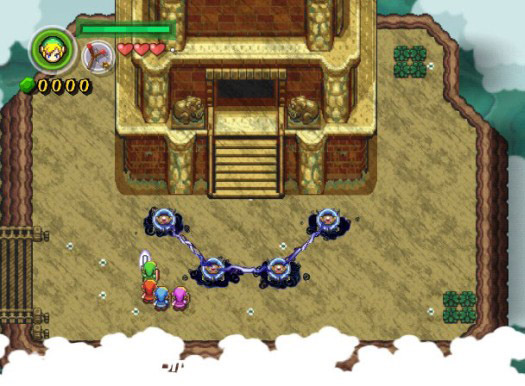 Like any modern Zelda game, FSA was too easy, but that didnt stop it from being an absolute blast co-op. It was even possible to play solo, controlling all four Links at once, but that was missing the point. Millions of gamers love the core Zelda experience, and Nintendo managed to capture that magic and let them play it with their friends...as long as those friends had Game Boys and the cables to go along with them. By making a game to push sales of their much-touted connectivity, Nintendo overlooked the brilliance of what they had created.

Six years have passed since the release of Four Swords Adventure, and no sequels or spin-offs have materialized. Out of Nintendos vast, decade-spanning catalog of wonderful creations, there is perhaps no game better suited for a revival than this co-op Zelda adventure. Online play would eliminate the unnecessary hardware barrier. Digital distribution outlets could make Four Swords a downloadable adventure rather than a full-priced console release.

The first Four Swords proved multiplayer Zelda was fun and compelling. Four Swords Adventure proved that the gameplay was sustainable over a longer, more involved quest. What could a Four Swords sequel for the 3DS prove? That, beyond a shadow of a doubt, Four Swords Adventure deserves better, and that co-op Zelda was a way cooler idea than Mario Party. Unshackled from restrictive link cables, people might even play the game next time. 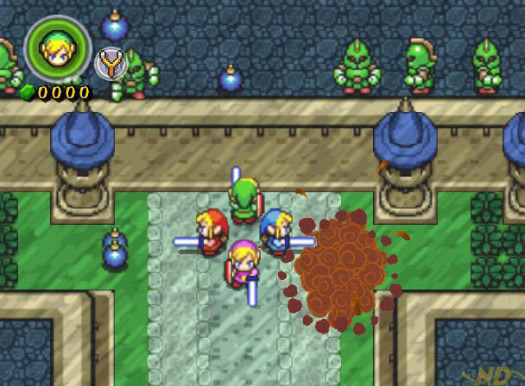