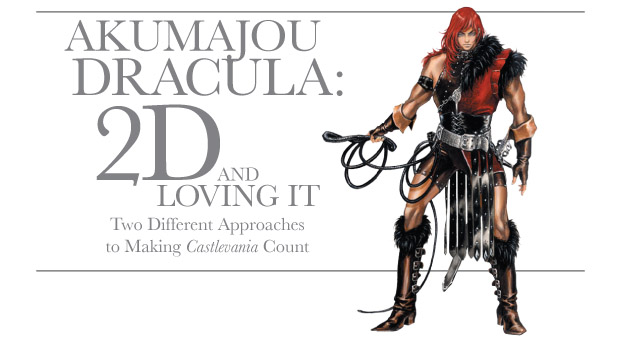 The 32- and 64-bit consoles pushed video game technology into an entirely new tier of possibilities. On previous consoles, video games were entirely 2D (with a handful of exceptions), a large majority of those being sprite-based. Simply put, video games all looked the same. But with the PlayStation and its contemporaries, polygons and 3D graphics changed what games looked like, how they behaved, and how they played. When a shift this revelatory occurs, every game creator needs to askhow do old games transition into this new market? Which franchises can survive, and how are they going to do that? With Castlevania on PlayStation, Konami proved that a series can evolve successfully without following everyone elses lead.

While Castlevania had always branched out to multiple platforms, its success was firmly linked to Nintendo. With one exception, the core titles featured level-based, challenging platform stages, and they all debuted on the NES or its Super cousin. Even the GameBoy games followed this formula. Meanwhile, it was the other platforms -- the MSX, the Genesis, and the PC Engine -- where Konami chose to mix it up a bit, experimenting with concepts like nonlinearity and anime styling. So when it came time to decide which console would inherit Castlevanias obvious canonical evolutiona 3D version of the classic level-based gameplaythe choice was clear: Nintendo 64. While Etsunobu Ebisu (a producer previously credited with Goemon and Bayou Billy) took the series official reigns on a sure bet, the veteran staff followed Toru Hagihara to the PlayStation for yet another experimental Castlevania.

At the time, 3D updates to classic 2D series didnt have the highest of reputations -- a fact not lost on Konami, the company behind Contra: Legacy of War. Despite efforts by Mario 64, Tomb Raider, and a few others, 3D gaming in general hadnt quite hit its stride, and long-time gamers were understandably skeptical of enjoyable old games crammed into imperfect new molds. Rather than attempt to follow the Castlevania 64 teams lead, Hagihara had something else in mind: Keep the action 2D, but ignore Castlevanias rules and forge onward and explore their prior experiments. Using previous offshoot Dracula X as a springboard, the team created what is still considered by many to be the best game in the series -- Castlevania: Symphony of the Night.

Rather than take their franchise and force it to do everything the PlayStation was capable of, the Symphony team looked at everything the PlayStation was capable of and used those findings to craft the finest example of their franchise. While the game runs on a 2D plane and the characters are lovingly animated sprites, there are plenty of polygons at work in Castlevania, from enormous background elements to tiny enemy projectiles. Hagiharas team knew their voodoo, and their out-of-box thinking extended to every aspect of the games planning. Nigh-unlimited storage meant a sprawling castle players could explore in every direction. All that only filled half the disc? Invert it so they can explore it all again. Traversing such an environment requires a more agile, nuanced character -- so trade out those Belmonts for undead heartthrob Alucard, then kit that fellow out with an armorys worth of swords, knives, axes, and all manner of shields and armor. Give them all individual graphics, sprinkled liberally with unique animations. And, just because of all that extra storage space, throw in a few completely superfluous familiars and button-combo magic spells. Wrap it all up in RPG-style experience-based progression and voila: The deepest, most complex Castlevania game ever (and thats not even going into the loving touches like the eagles nest or poor Yorick).

Symphony was deep and complex, but also really different. When EGM revealed the game, I know of one young would-be game producer who thought Alucard looked stupid and dhampirs with swords had no place protagonizing in lieu of barbarians with whips. Gamers had weathered franchise change-ups before -- Zelda II, Simons Quest, Super Doki Panic Brothers -- but none so drastic and whole-cloth as Symphonys upheaval. Most miraculous of all, though, was just how Castlevania the whole thing felt. In fact, that young producer was able to shed his prejudice and accept Symphony for what it was: brilliant. Most gamers did the same, and its nonlinear, RPG-lite formula landed it a place on every best 100 games list. 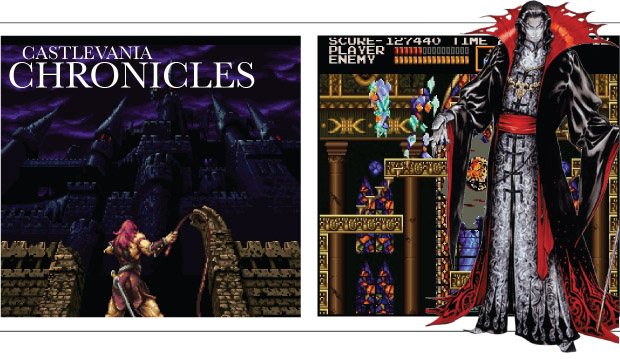 Four years, two failed N64 games, and one terrible GameBoy disaster later, Castlevania returned to the PlayStation with another crazy experiment. With Symphonys legacy incubating in Circle of the Moon, Konami decided to take aim at the classics with Castlevania Chronicles. For all those fans who begrudgingly accepted Alucards wavy white locks and vampiric ways, Simon Belmont returned as leather-clad and whip-ready as ever. He brought with him a level-by-level quest through the singular location of Draculas castle -- just like Mom used to make. And rather than attempt to rebottle that old school lightning, Chronicles was simply a remix of an obscure-but-loved title for the Japanese X68000 (itself a remake of the original Castlevania -- the third such remake, technically). Konami even polished the game to PlayStation standards with newly arranged music and redrawn graphics. The logic seemed flawless; Symphony sold to long-time fans and opened the series to a new audience, surely Chronicles would cater to those fans and introduce the expanded audience to Castlevania history.

Strangely, however, Chronicles vanished in the marketplacedespite legions of old-school gamers begging developers to make games the way they used to, the interest just wasnt there. On paper, it didnt make sense; had Mega Man Powered Up come out on PlayStation it would have blown minds. A Link to the Past could have -- and did! -- sell incredible numbers even after Ocarina of Time rewrote the book on Zelda. So why didnt Chronicles perform? The answer lies in the most amazing thing that Symphony accomplished: it evolved Castlevania in such a compelling way that its new style eclipsed the old. Its sprawling castle made three-block stages seem cramped. Its long weapon list and bestiary provided variety that classic-vanias couldnt hope to match. With Symphony, the culmination of Castlevanias offshoots and experiments became the de facto series standard.

The PlayStation version is often a disclaimer for when a game series changed -- usually irrevocably. The resulting games arent always bad, just different. However, no self-respecting gamer over 25 would ever say they prefer that new direction over the classic, old school roots of whatever series it might be. Barring, of course, Castlevania. Hagihara and his team knew the series intimately, and followed their intuition and passion when crafting the PlayStation version. In doing so, they redefined what Castlevania meant for old and new fans alike, more than a decade after the franchises inception. And one shouldnt take Castlevania Chronicles low sales as a mark against the validity of repainting a little-known classic. In the years since, this approach has paid dividends; Konami even repeated the strategy with Rondo of Blood, the game that spawned Symphony. If anything, it was simply ahead of its time. Both PlayStation Castlevanias show that to survive, a series must evolve. However, the most successful evolution rarely follows blindly behind the latest technological bandwagon. Its a useful lesson for creators and consumers alike: your favorite games will change, and change can be good. Or, put more directly, dont dismiss a bold new direction just because youre not controlling an effeminate pretty boy with an arsenal of bladed weapons.