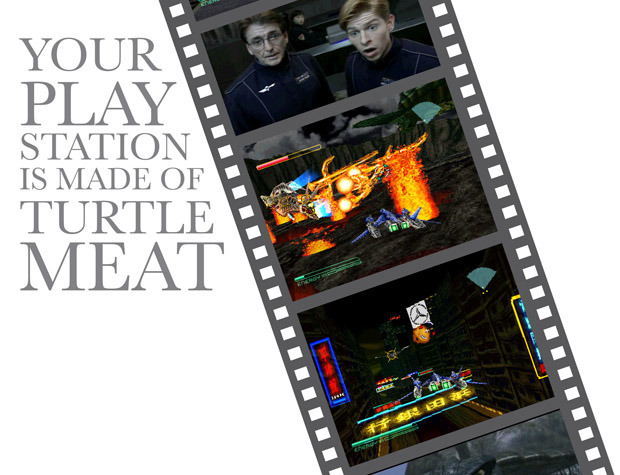 Nothing says import-only quite like a rail-shooter where a fighter pilot teams up with Japans favorite giant amphibian to battle extra-dimensional/alien invaders with a combination of lasers, fire breath, and horrendous acting. Gamera 2000 is a game that has no right to be as good as it is, being both a licensed game on the PlayStation and a frequent user (one could say abuser) of live-action FMV cut scenes. Despite those two black marks, though, Gamera 2000 is a surprisingly competent Panzer Dragoon clone with solid enough gameplay to make up for its so-bad-its-good story.

Like in Panzer Dragoon, the player can attack via rapid fire bursts or lock-on lasers, only the lasers in this instance are homing fireballs spit out by Gamera who accompanies the player as his wingman. The player can also hold down a button to charge up Gamera, and upon its release the giant turtle-beast launches forward, repeatedly attacking enemies in proportion to the duration the button was held. A few stages switch things up and have the player driving a futuristic hover bike through forests and caves, and others involve running interference for Gamera while he battles giant foes kaiju-style. Its really a very dynamic, entertaining title, and holds its own against others in the genre.

Of course, despite how solid the gameplay is, the one thing that everybody who has ever played Gamera 2000 remembers is the cut scenes. Live-action videogame cut scenes have a long history of being poorly acted, low-budget affairs, but Gameras are in a league of their own. While the visuals of these scenes are actually quite nice for something youd find on the PlayStation the quality of their acting and dialog lies somewhere between nursing home improv and a crazy street person involuntarily reciting the lines from a movie he once saw. For some reason, despite the game having only ever been released in Japan, the dialogue is all voiced in English, and most of the actors sound like it was the first time a word from that language had ever passed their lips. This goes beyond just sounding stilted. They pronounce words strangely, place emphasis on the wrong parts of sentences, and exhibit awkward body language that makes it clear they have no idea what theyre actually saying. The hero, Jack, emerges as the best of the bunch merely by virtue of apparently being a native English speaker. While were on the subject, its clear Jack was meant to have the vibe of the grizzled veteran soldier. Instead he comes across more like your offices systems administrator who got up late and didnt have time to shave. His first affected swagger onto the screen doesnt say, I am a cool, confident pilot of high-tech military equipment, but rather, I once attended Space Camp and would like to do so again.

Still, the fumbled cut scenes are more just a bit of ridiculous icing on a cake of a game which is, overall, quite good. It may be one of the more hidden import gems in the PlayStation library, but it is a gem nonetheless.