Despite its rather positive critical reception, The Neverhood for the PC wasnt exactly a breakaway financial success. Nevertheless, the developers had enough faith in, or simply enough emotional commitment to, the massive universe they had developed to take a whack at creating a sequel. As the star of point-and-click adventure games was (temporarily) setting, and PC gaming as a whole was struggling, The Neverhood, Inc. decided they would instead make the sequel a platformer and a PlayStation exclusive. Unfortunately the type of platformers that were flourishing on 32-bit systems were those where cartoony, animal-themed mascots sprinted around wide, empty 3D arenas collecting doodads. Tough-as-nails 2D affairs like Earthworm Jim and Donkey Kong Country, games which appear to have at least partially inspired Skullmonkeys, seemed at the time like relics of the 16-bit era. Skullmonkeys was therefore largely panned by critics, and its uninspiring sales essentially sealed the fate of the Neverhood universe.

In a way, though, Skullmonkeys seemingly dated appearance and mechanics have helped it age significantly better than many of its contemporaries. While the likes of Crash Bandicoot and Super Mario 64 now look blocky and feel awkward, Skullmonkeys claymation visuals are pleasantly attractive, and its simple hop-and-bop gameplay is simple and intuitive. Skullmonkeys does an excellent job of recapturing the visual flair of its predecessor and in some ways even surpasses it. The Neverhood may have felt strange and alien in places, but it was literally just one neighborhood. Skullmonkeys, on the other hand, sees Klaymen battling his way through grim factories, sprawling ruins, dense jungles, snowcapped peaks, and a host of other unique environments. While the presence of dozens of disparate stages in Skullmonkeys guarantees that most of them lack the handcrafted warmth of The Neverhoods handful of buildings, their variety and exoticness delivers a much more dynamic, diverse play experience. Each level in Skullmonkeys feels weird and fascinating like the best-designed areas in platformers of yore, its scenery practically demanding the player scour every corner for secrets. Which is a good thing as the game is absolutely packed with fake walls and hidden passages. 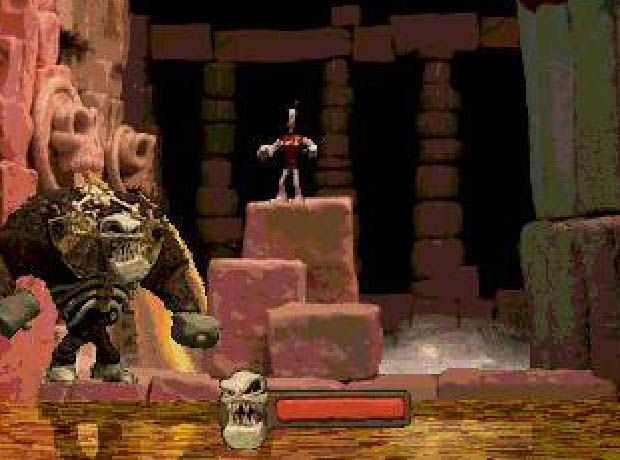 Contributing to the games excellent ambience is the music of Terry S. Taylor who returned to score the second chapter in the Neverhood Chronicles. It may be a bit disappointing at first that the tunes of Skullmonkeys lack the mellow, laid back smoothness that made the music in The Neverhood so brilliant, but their steady, jazzy beats feel much more appropriate to Skullmonkeys brisker pace. The bizarre, creepy Bonus Room song already has a fair amount of reknown and is likely one of the best pieces of music in videogame history.

Despite this praise, the reviewers of the day werent completely wrong when they took Skullmonkeys to task. There are reasons that the game hasnt quite achieved the cult status of forgotten gems like River City Ransom, E.V.O.: The Search for Eden, or even its own predecessor. Firstly, it commits two of the cardinal sins of platformers. While the gorgeously smooth character animations and huge number of graphical flourishes visible in each stage may be a joy to look at they occasionally make the gameplay feel like trying to do a pole-vault in a ballroom gown. The platforming in Skullmonkeys is extremely demanding and precise, especially in some of the later stages, and all the extra business on screen can really muck it up. Many older platformer series fumble when attempting to make the leap to more technologically advanced hardware: Their intense gameplay was dependant upon the players connection to the terrain he was navigating, and their simple graphics actually made that easier. The more elaborate the scenery and animation, the more difficult it becomes to pull off those precise leaps. Combine this with the games other major sinits iffy hit detectionand you have a recipe for a lot of unfair deaths. While the games password system and generous powerups mitigate the frustration somewhat, enjoying a difficult platformer is typically dependent on a steady sense of personal improvement, and its hard to feel like youre getting better when success or failure so often feels arbitrary. 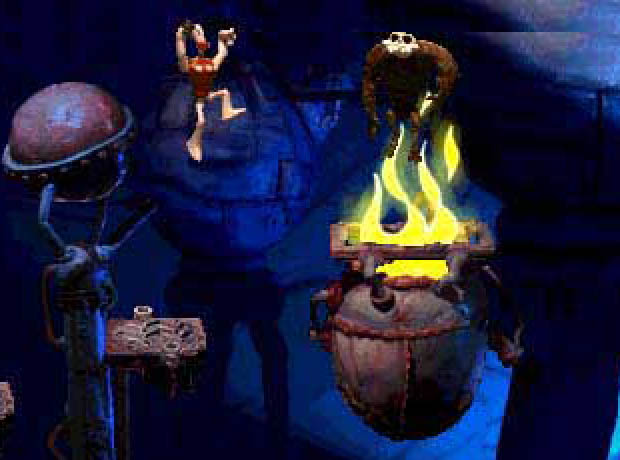 The second major problem is that the game really isnt a very good sequel. The Neverhood was a game about exploration and discovery in which the player slowly pieced together an understanding of who and where he was and what his goal should be. Sure, it had its fair share of silliness and scatological humor, but at its core it dealt with some very fundamental questions of existence. Skullmonkeys ditches pretty much everything except the silliness and scatological humor and uses all the extra space to pack in more of those two things. Theres nothing particularly wrong with the goofy way the game plays things, and as with The Neverhood, most of the claymation cut scenes are quite funny. However, its hard not to feel like Skullmonkeys is somewhat missing the point of what made The Neverhood so great. After all, wouldnt those gorgeous backdrops have been a lot more fun to gradually explore than to haphazardly leap through while running at full tilt?

Therefore Skullmonkeys is really more an interesting piece of PlayStation errata than an essential piece of gaming, even for fans of The Neverhood. Everyone definitely needs to listen to the soundtrack, though. 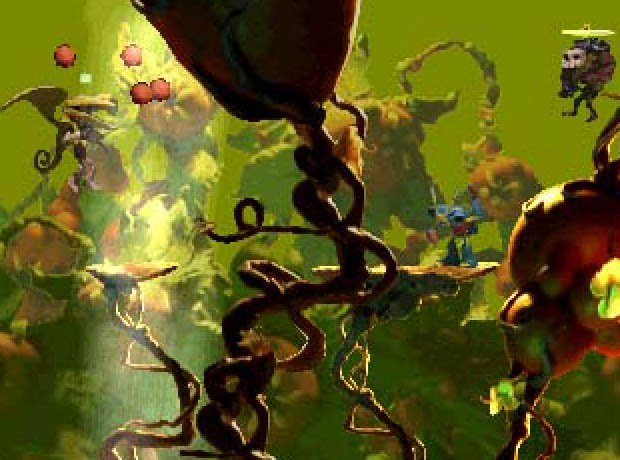