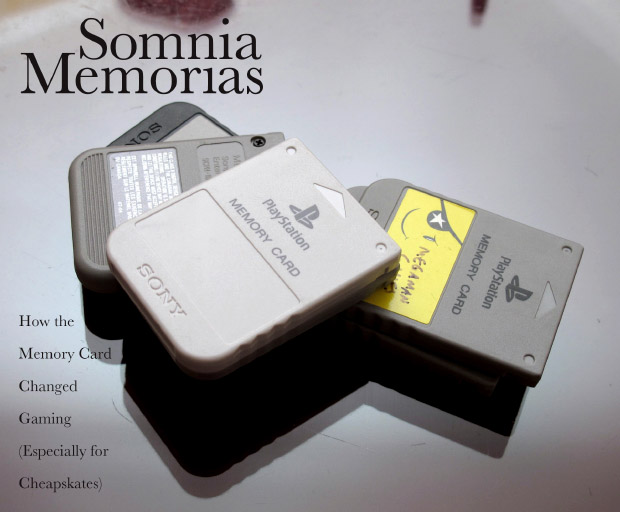 The PlayStation faced a unique problem at launch. It was the first major, mainstream console since the need for such things arose where games could not be saved without a memory card. At the time, cart-based battery saves were more or less ubiquitous. The only games not featuring them as a matter of course were a handful of aggressively multiplatform titles whose developers decided a consistent password system was easier to deal with than implementing a unique save system for every version. Sega had even set an example of how to avoid the problem by building flash memory into first the Sega CD and then the Saturn (battery life issues notwithstanding). Prior to PlayStation, memory cards had been unique to the very expensive and not-at-all mainstream Neo-Geo system, where it existed as a clever way to allow players to carry their game progress between home and arcade systems (given that both home and arcade versions of Neo-Geo games were identical).

The notion that one needed to buy some little plastic tab and jam it in above the controller port just to save their game was so unprecedented that some early developers for the system reverted to password systems in case consumers didnt catch on. It was no unwarranted concern; in the earliest days of the PlayStations life, many customers actually didnt catch on, or worse, had to deal with retailers not stocking enough cards to go around.

Eventually, everyone got their heads around the idea and found an upside or two to the situation. With saved data going to a separate device, where it could then be copied and backed up, games were effectively prevented from restricting the player to using a finite number of save slots. Renting or borrowing games no longer ran the risk of having someone else save over your progress and even let you pick up right where you left off if you ever snagged your own copy. More esoterically, one game could read the saved data of another, and while it was strangely rare for anyone to properly capitalize this and transfer data from one game to another, it did at least allow Psycho Mantis to creep us out by commenting on our having played Castlevania? and Suikoden.

On the other hand, the storage capacity of a PlayStation memory card was rather low, and more to the point, badly managed. Rather than do the sensible thing and allow for varying file sizes, each cards 128 KB of space was divided up into 15 blocks of equal size. While an RPG could easily fill a whole block, sometimes spilling over into a second or even third, games whose save data consisted entirely of a variable to indicate the last level reached or a few flags for unlocked fighting game characters would still hog an entire block to themselves, despite needing only a few bytes of space. Anyone who owned more than a handful of games would quickly run out of space on their cards, particularly given the fact that the PlayStation ushered in the meteoric rise in popularity of both 80-hour RPGs and horror games designed around the assumption the player would never save to the same slot twice. 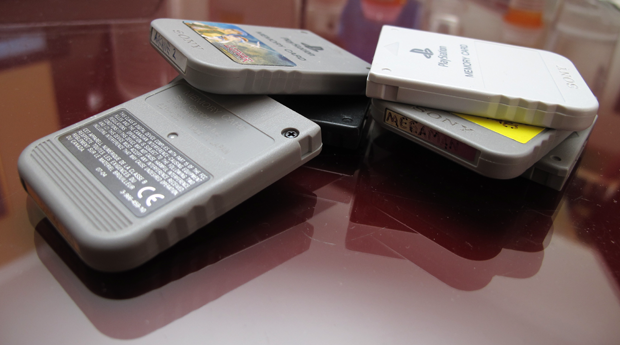 For some, this was merely a problem of bookkeeping. Buy half a dozen memory cards, set up a system keeping save files sorted out by genre or game series, label them clearly, and live with the added expense. One could also take their chances on a multipage third party card, but aside from these devices being notoriously failure-prone, the systems management interface would still only display 15 files, true capacity be damned. For the more frugal-minded, however, being a PlayStation gamer required hard choices on a regular basis. Is it worth it to keep extra slots for backup save files? Once a game has been finished, should all saves be deleted, or kept as a record of the achievement? Even if you feel you arent likely to play a game again, if youve unlocked extra characters or looped a New Game + file around, all that time investment and accomplishments are a hard thing to let go of.

This in turn led to a phenomenon which would have been a masterstroke of Machiavellian marketing, had it been intentional. If someone doesnt own, say, a Super Nintendo, but enjoys playing games on a friends system, all is well. Any given game will typically have three save slots, one for the owner, and two spares for friends. As soon as a fourth person wants to get in on playing a given title, things get a bit awkward, but otherwise all is well. Expecting to snag a save file for a game on a friends PlayStation is a different story. Every precious memory card slot given out to you means one less game your pal can use that card for. More likely than not, youre going to have to go buy your own memory card. Then at some point, youll find yourself with a card full of saved games sitting on a desk which you cant do anything with. Eventually it will get to you, and youll buy your own console just to get some proper mileage out of that thing. At which point we need to congratulate Sony: Theyve just sold you a system by virtue of a terrible data storage solution.

Future consoles made more sensible moves, first moving to memory cards with far more dynamic file sizes, then to voluminous hard drives, circumventing the whole issue to begin with. Of course, these drives then lead to the rise of downloadable games and add-ons, which marry themselves to a particular console. The benefits of the PlayStation memory card still rule supreme for the mooching bum.