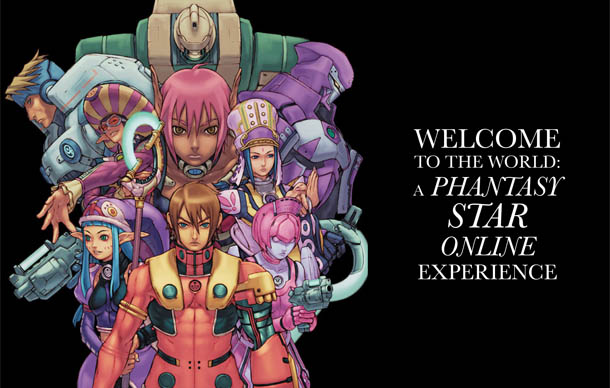 Growing up in a small, rural farming community, Internet access came at a premium. My family didnt even jump on the information superhighway until I was a freshman in high school in 1999, and even then our mediocre phone line didnt provide the most desirable connection. Speeds of 56kbps were but a dream, and managing to connect at a speed on the north side of 20kbps was a cause for celebration. Combined with an archaic PC that struggled to play shareware from id Software and, well, my knowledge of both PC gaming as well as the online revolution that was sweeping the hobby was virtually nonexistent. Thankfully, at least one of these deficiencies in my gaming lexicon would be remedied by the modem-equipped Sega Dreamcast, serendipitously released in the same month that I finally gained reasonable Internet access. Finally, I can be one of those cool kids, playing games with other people from across the globe! I dreamed.

Sadly, that dream would have to wait, as online gaming on the Dreamcast was not an immediate reality. Eventually, the excellent online puzzle game Chu-Chu Rocket was released, and while it provided an engaging experience, it did little to sate my hunger for genuine online gameplay. As time progressed, more action-oriented games with full online functionality were released, such as NFL 2K1 and Quake III Arena, and while these would have been incredible experiences, my slow-as-molasses dialup connection rendered them virtually unplayable -- both required twitch reflexes and precise timing. Luckily, at the beginning of 2001, my prayers were answered with the release of Phantasy Star Online, an action RPG created ostensibly with online gaming in mind. I had envied those who were able to immerse themselves in the online narcotic known as EverQuest, and though PSO was not an RPG of the massively multiplayer variety, it still provided a novel, exciting experience.

Before entering the world of Ragol, I was first tasked with creating my avatar. Having no firsthand experience with the Phantasy Star series, I found myself lost, as the breadth of my RPG knowledge at this point had come exclusively from Squares vast roleplaying library. Everything from the properties of spells to the names of standard healing items was foreign to me. The class system in PSO was foreign to me as well; instead of being able to select a race, gender, and class separately, everything was intrinsically linked. Three classes (the melee-focused Hunter, the firearm-wielding Ranger, and the magic-spewing Force) each contained three unique builds based off a combination of gender and three races (the balanced Human, the magically-inclined Newman/elf, and the robotic Cast, physical powerhouses unable to use any magic). After much deliberation, I settled on the RaMar, a human male Ranger. The class was a perfect fit for my preferred play style: A long-range sniper who could also use stat-boosting spells to support the party. With my Ranger finished, I was ready for deployment to the harsh alien world of Ragol. 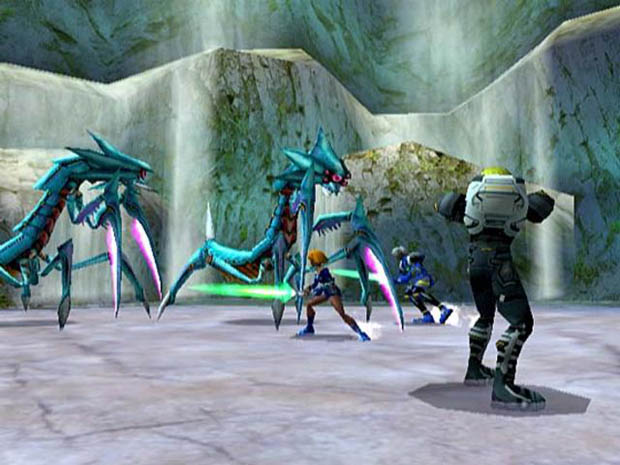 Before setting foot online, I wanted to get at least some experience under my fledgling belt. Luckily, Phantasy Star Online had a complete offline mode, which largely offered the same amount of content as the online mode (sans exclusive online-only quests.) After buying some basic survival supplies, I teleported down to the first area of PSOs diverse planet: a lush, verdant forest. Here, I was able to gain a grasp of the games unique combo system. All weapons, from the long-range sniper rifle that I specialized in to the largest broadsword, had three attacks: A standard attack, a strong attack that sacrificed accuracy for raw power, and a special strike that was weak but contained a special property unique to each and every weapon, such as the ability to stun or poison an enemy. These attacks could be strung together in any configuration in a three-strike sequence, though since accuracy tended to increase after each successful blow, the most tactically sound option was to begin a combo with the more accurate standard strikes, and finish the combo with the less accurate strong/special attacks. In some ways, it was akin to a real-time version of the battle system seen in Chrono Cross on the PlayStation.

After mastering the basics of the battle system, I effortlessly slaughtered my way through the wildlife on Ragol, leaving the massacred carcasses of Rag Rappies and Hildebears in my wake. Brimming with an overinflated amount of self-confidence as I reached level 5, I thought I would venture to the boss lair. How hard could it be? I thought. I mean, I had single-handedly placed every predatory species in the planets forest on the endangered species list, so one boss shouldnt be that much more difficult, right?

I then came face-to-face with a giant crimson dragon. Within moments, my RaMar was scorched by a sudden but massive stream of flames. Instant death. I had lost my weapon (during my short journey, I had found a stronger rifle with the unique ability to drain MP with every special shot) and all of my unspent gold, as was the penalty for death in the world of PSO. While I could have fought my way back to the dragon to reclaim my lost loot, I realized the inalienable fact of life in Phantasy Star Online: I needed help.

Jumping into the online mode was a bit of a shock for someone such as me who had never stepped online in a cooperative game before. Upon selecting a server, I was transported to a small hub filled with a single help desk in the center, not unlike an airport terminal. The screen was overflowing with text bubbles from the numerous characters waiting in the lobby; these were the days before online voice chat had become commonplace, and communication was only possible via a keyboard connected to the Dreamcast (or worse, the in-game keyboard) which resulted in speech bubbles appearing from a characters head. After asking for help with the dastardly dragon (as a naïve online greenhorn, I had no shame in asking for help with such an easy foe and being labeled a n00b) three players quickly volunteered their services. The maximum party size in PSO was four players, certainly a small party by todays standards, but more than enough to fell a difficult opponent with effective teamwork. With our party set, the four of us teleported back down to the forest of Ragol to slay the beast. 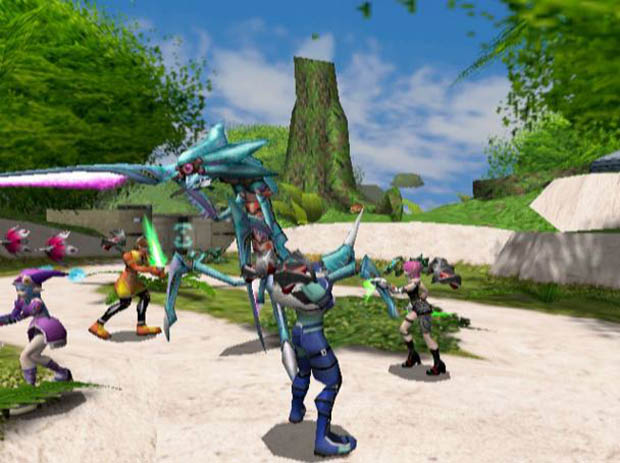 Well, that is to say, the three of us watched as the fourth character obliterated everything in her path, including the dragon. While two of my newly-acquired online friends were roughly the same level as I, the fourth character was significantly overpowered for this early area of the game. A level 30-something HUnewearl (a female Newman Hunter) wielding an impressive dual-blade lightsaber, it was obvious she was tagging along to perform a charitable act for the neophytes. After the dragon was reduced to a lifeless husk and we had scavenged its cave for rare loot, the veteran noticed the incredibly weak stock rifle that I had been forced to use after having lost my superior rifle during my previous encounter with the dragon. Out of an act of charity (or pity) she gave me an excellent rifle that I wouldnt have normally have stumbled upon until tens of hours of gameplay later. Sadly, weapons in PSO had minimum stat requirements, and I could not equip the generous gift. The Hunter had a remedy for that as well! She bestowed upon me accessories (which could be attached to armor) that greatly enhanced my base stats, and before I knew it, I had an astonishingly powerful weapon at my disposal. After exchanging Guild Cards (think friend requests) with my party members we all went our separate ways. My first online gaming experience had been a monumental success! I find it strange that, a decade later, I still recall my first online RPG party in such great detail; perhaps it is some peculiar form of a Gaming Flashbulb Memory.

As my time with Phantasy Star Online increased, I came to the realization that the majority of those playing were not as magnanimous as my first party. This was incredibly obvious during my attempts to trade items with other players. Unlike most online games, there were no trade windows or in-game trading interfaces; all trades were performed on the honor system, where two players would drop their negotiated items far away from one another, as if they had stepped off fifty paces for a duel in the Wild West. Players would often exchange Guild Cards as proof of their honesty, but even that act rarely guaranteed that a trade would go smoothly. I had been shafted a couple of times in bogus trade attempts, losing rare items I had legitimately discovered during my journeys before I had learned my lesson. This lack of trust managed to seep into some of my online parties as well, as the more avaricious players would steal rare weapons and money that had been dropped by a freshly-deceased player. After losing a few more weapons because of this (including the nifty rifle I had been given by the charitable HUnewearl!) I rarely used my best weapons online, reserving them for offline play or if I was playing with a group of trusted friends.

I am ashamed to admit this, but after being screwed over numerous times by random jerks, I began treating other random people the same way. I mislead people into trading me a rare weapon or item for some bogus loot. I stole rare weapons off the corpses of new companions, earning the ire of many a player. I had briefly dabbled in the practice of duping, which allowed savvy players to exploit the game in order to create duplicates of any and every item, in order to have a virtual smorgasbord of illegally-obtained goods. During one particular bastardly phase, I used a hacked accessory that rendered my magic stat negative (thus causing the game to reverse the effects of many spells) to kill other players effortlessly to stag their unique loot by using a healing spell to cause damage. It was impossible to normally attack or damage other players, so this item made player-killing possible, if not incredibly unfair and malicious. Much like how life in prison can turn an innocent man into a hardened criminal, the cruel reality of online gaming had turned the cheerful, optimistic gamer in me into a callous cheater and thief. 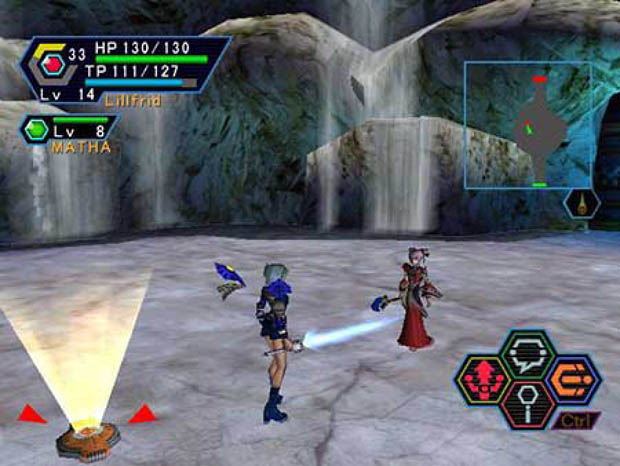 Thankfully, I quickly outgrew this dickish phase, and began to enjoy the game once again! I had made a group of close, trusted friends which made the experience infinitely more enjoyable when compared to my previous exploits in the seedier side of PSO. Together, we conquered Ragols dank caves, mech-laden mines, and enigmatic ruins. We obsessively played on PSOs hardest difficulty, maxing our characters to level 100 in the endless pursuit of rare weapons and armor. I could finally see how online RPGs could be such an engrossing, addictive experience.

For much of 2001, Phantasy Star Online dominated my gaming time. I poured hundreds of hours into the Dreamcasts premiere online experience, and while that may sound like a small amount of time when compared to the thousands upon thousands of hours many World of Warcraft players dedicate to Blizzards MMO juggernaut, it was an eye-opening experience for me. In retrospect, PSO was not perfect, especially when compared to similar grindfests on the PC. For example, Diablo II (which I would discover and love years later) offered a similar experience to PSO, only with vastly greater character customization, loot, and depth. Still, being my first significant online gaming experience, Phantasy Star Online will always hold a place in my gaming heart, and is one of the reasons I have such a nostalgic love for the Dreamcast.