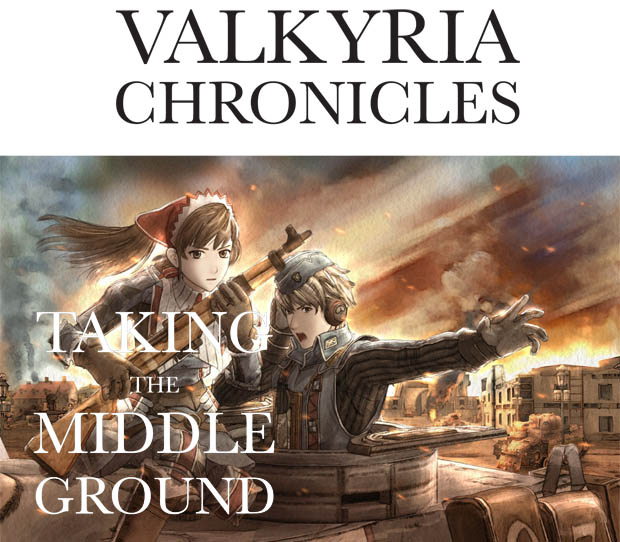 Ive never really been able to get into World War II games. Yeah, its partly because most modern examples are first-person shooters, which isnt really my favorite kind of game. But regardless of genre, they almost all focus on gritty realism, with monotone scenery and an oppressive atmosphere. Sure, thats appropriate for the settingbut I play games to relax and escape, and this sort of darkness just isnt what Im looking for. Still, I sometimes regret missing out on games with reportedly excellent mechanics, and I do find the politics and technology of the era somewhat interesting.

The solution, apparently, is to ditch realism entirely and re-tool the conflict in the thinly veiled fantasy setting of Europa, which is where Valkyria Chronicles takes place. Though the geographic outlines look awfully familiar, history has changed, and the continent as we know it has been largely subsumed into two superpowers: The Atlantic Federation, a powerful but heavily bureaucratic giant in control of most of Western Europa, and the Empire, a sort of mix of Imperial and Soviet Russia which has overrun most of the East and seems to encompass influences from Nazi Germany as well as the feudal past. Stuck in-between, on what would be our Baltic coast, is the tiny but resource-rich Principality of Gallia, where the action transpires. 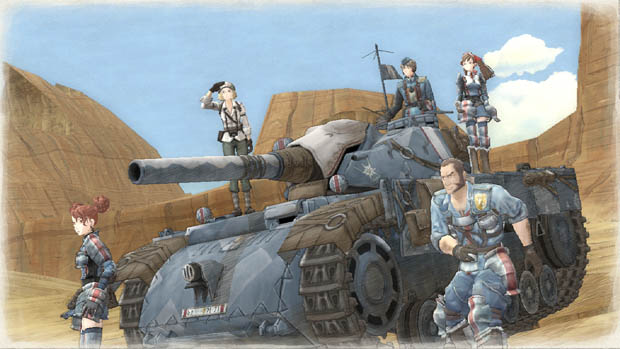 Not only politics have shifted in this tilted version of the Great Wars; technology is different as well. In fact, one could place it in between our wars, in that machine guns and tanks are refined and commonplace (up to and including the sort of super-tanks only dreamed of by the Nazis), but airplanes and advanced rocketry are almost unheard of. Furthermore, coal and oil are replaced as the primary energy resource by Ragnite, a semi-magical mineral which can be refined and put to a host of uses ranging from fuel to weaponry to even medicine (with its signature blue glow lending some visual appeal as well as pointing out tasty targets). It just so happens that Gallia is sitting atop one of Europas largest reserves of the stuff, making it strategically tempting to its much larger neighbors.

Historical events are also put through the blender to get Europa to where it now stands. It is said that long ago, Europa was united by the Valkyrur -- powerful female warriors whose design influence combines Norse legend with modern magical girlswho saved the continent from a calamity caused by the raven-haired Darcsen tribe. In current times, the descendants of the Darcsen provide an obvious analogue for Europes Jewish population, facing prejudice from every quarter and even being rounded up into concentration camps by the Empire. Of course, legends are rarely completely accurate, and not all is as it seems in Europas history.

The general setting is far from the only thing remixed and re-combined in Valkyria Chronicles, though. The gameplay also draws from an unusually diverse pool of genres and conventions. The screen first presented to the player in any given skirmish looks like a high-level strategy war game, with units positioned on a parchment-style overhead map. The player and the enemy take turns expending command points to move units, retreat and redeploy assets, or call in special actions like artillery strikes. So far, so tactical. 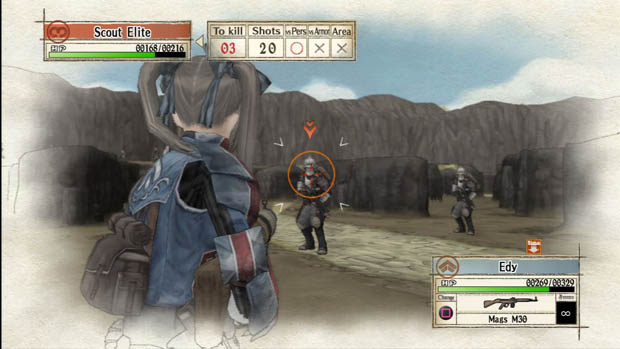 The genre synergy kicks in when you select an individual unit to move; suddenly the camera sweeps down into the map to an over-the-shoulder view, where you run that unit across the terrain in real time, getting into advantageous positions and lining up shots manually. Tension is introduced to these sequences by the fact that most units can engage in reaction firealthough only one unit is in motion at a time, any foe that gets you in visual range can pepper you with bullets as long as youre moving. This feature then feeds back into the tactical level of the game, as setting up traps of free reaction fire from your own units before the enemys turn starts is key to resisting an assault.

Plenty of details keep the combat interesting beyond just moving, firing, and setting up strategic positions. If an enemy unit can see you lining up a shot at them, they have a certain chance of ducking, forcing you to make a choice: Do you aim for the head for a quick kill that risks missing entirely if the enemy hits the dirt, or do you aim for the knees and do less damage that will probably connect in any situation? Units can also gain a defensive advantage by hiding behind sand-bag bunkers, greatly reducing the damage from incoming fire, but they can be flushed out by explosives or, after eventual upgrades, a well-placed wall of fire from a flamethrower.

Speaking of upgrades, in addition to the equipment research and development thats expected in this sort of game (not to mention the tank upgrades, an entire sub-system of their own, and the ability to steal new designs off elite enemy soldiers), theres also an RPG-like experience system that gradually enhances the stats of your infantry units. Experience is gained with every skirmish, and the game includes training missions that can be re-played, allowing you a certain amount of freedom to tweak the story missions difficulty to your own preference. Playing through everything once leads to a nice, balanced experience, but if youd like to be sure you outclass the enemy, that option is available as well. Experience can also be used to offset one of the games mechanical weaknesses: Battle performance is scored purely on number of turns spent before victory, encouraging sprint for the finish line tactics which may not always be the most rewarding way to play. 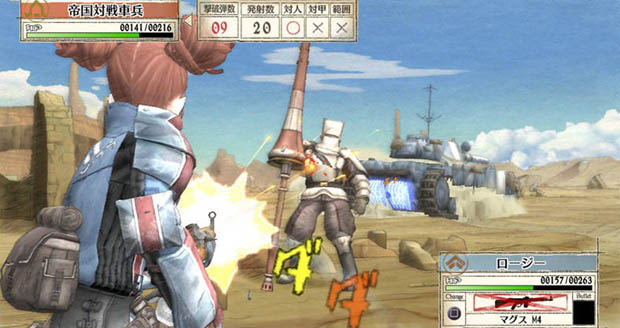 In either event, accumulated points are spent at the training grounds, where you enhance not individual units but whole classes -- scouts, shock troopers, tankers, snipers, and engineers -- at a time. This feature is especially welcome because it lets you cycle through the games large cast of recruitable characters to your taste without worrying about leaving anyone behind.

And the characters are a big part of what gives this game, well... character. Its true that with a cast this large not everyone is going to be terribly three-dimensional, but for a band of archetypes, Squad Seven is unusually diverse and manages to branch out beyond the usual anime combat cliches -- though those are all present, too, if thats what makes you happy. But if you get tired of the chirpy schoolgirl, the cool pretty-boy, or the brash young gun, you can always try swapping in the old farmer with a bad back, the chronically shy engineer, the mother-figure who can take out a tank with the best of em, or the rather gothy sniper. Or, in a nod to the developers previous game history, the cheerfully unhinged Vyse and Aika of Skies of Arcadia fame. All of these characters get not only a reasonably detailed text backstory fleshed out as theyre used in combat but also special abilities and traits, both advantageous and unfortunate, that reflect their personalities in combat.

In keeping with a world just around the corner from reality, the game is rendered in a subtle, painterly style, like watercolor over a pencil sketch that fades out towards the edges of the screen. Sound effects show up on-screen as if in a comic book, and this conceit carries over to the menu interface, where the whole game is presented as the journal of a reporter embedded with the players unit. Over it all plays a gorgeous score by Hitoshi Sakimoto (Vagrant Story?, Final Fantasy XII). 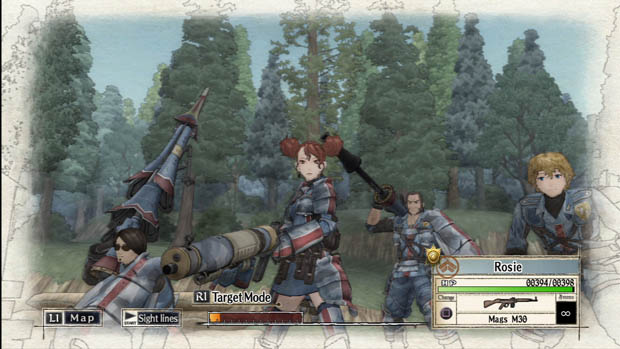 Of course, throwing together a mishmash of different sources, traditions, and styles is not without its inherent pitfalls. Although the game does make nods to the undeniable brutality of war, the cheerful nature of many of the characters can lead to disturbing clashes of tone -- like a trooper unloading her gun point-blank into an enemys head and exclaiming Yippie! with a little bounce at her successful kill. Personally, I also couldve done without the requisite redemptive sacrifice that the plot blatantly foreshadowed miles in advance. Still, the game manages to reign-in the worst anime-style excesses, something that sadly cant be said for its PSP sequel, which takes place in a Gallian military academy and gleefully encompasses every high-school stereotype ever to see animation.

Valkyria Chronicles itself, though, solidly holds the middle ground. Between realism and fantasy, between Western history and anime sensibilities, between high-level strategy and first-person action. Even the tone of the story seeks this happy medium. As director Shuntaro Tanaka puts it, Even in times of war, theres more that fills the hearts of men than thoughts of hatred for the enemy. For the very reason that death could be just around the bend, people need to live life to the fullest, and that means laughing just as hard as they cry. That was our theme.