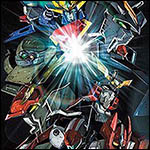 Battle of Sunrise
Sunrise Interactive | PS2 | Fighting or something
Taking a cue from the likes of Super Robot Wars, Battle of Sunrise is another game that dumps a random assortment of anime characters into a big pot, throws in some maybe-not-very-well-thought-out gameplay and hopes for big moneys. In this case, the anime characters apparently come from shows produced by, yes, Sunrise. Is it any good? I rather doubt it, but who knows. 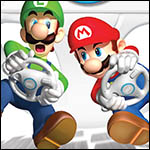 Mario Kart Wii
Nintendo | Wii | Racing
I like that Nintendo is no longer even trying to pretend the Mario Kart series will ever change significantly. The title of the latest game seems to sum it up: It's Mario Kart, for Wii. Which means a crippled online component and forcing you to waggle like a moron in order to race effectively. And really, who doesn't want that? 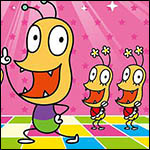 Oshiri Kajiri Mushi no Rhythm Lesson DS
Sega | DS | Brain training?
The latest DS "training" game, this one seems to be about teaching rhythm. Best case scenario: It's totally Parappa The Rapper? or Elite Beat Agents? masquerading as an educational experience. Worst case scenario: It basically just teaches you to count to four.