Imitation. Some claim it to be the highest form of flattery, while others find it to be the bane of their existence. When times for innovation get tough, the uninspired get copying, and myriad gaming drivel is consequently birthed every year in the perpetual pursuit of a quick buck. It's not exactly a new state of affairs -- as anyone who has ever spent time gaming knows, innovative titles are few and far between. It's arguably worse than ever nowadays as even so-called "original" titles are praised for the ways they effectively appropriate old ideas, bringing the innovations of yesteryear up to date in a way that is said to be "fresh," and perhaps even "exciting." In fairness, practically every game has elements of some other game wrapped up inside it somewhere. No, reinventions are fine, perhaps even necessary. The real problem arises the moment that the word "clone" enters the picture.

You see, nasty accusations of one game being a "clone" of another have been flying about practically since videogaming's conception. Come to think of it, the first-ever commercial arcade game was a clone of Computer Space, which at the time was the only other video game in existence. I understand how easy dredge up the work "clone," as it conveniently calls attention to the sometimes-eerie parallels between two works. But clone is such a weighted word, insinuating an identical copy of another game rather than a derivative work. The majority of so-called "clones" games simply borrow a few elements from another source or two and retool them in unique ways, often going so far as to change the overall premise or presentation in the process, for better or worse, making the end result something unique unto itself. Consequently, the depths of creative bankruptcy in those few games that truly are clones is devalued. And that leaves people like me casting about for a new term that can effectively express sheer, blatant disregard for originality when something like Golden Axe Warrior comes along.

After spending some time combing through my Master System titles, it's become increasingly clear to me that the word "clone" should only be used in conjunction with the word "Zelda," and only when talking about something that is as unflinchingly derivative of it as Golden Axe Warrior. If the term "illegitimate identical twin" made any logical (or biological) sense at all, that would be the perfect way to describe this game. 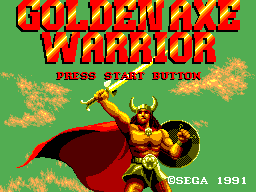 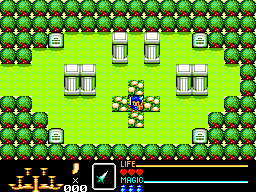 After spending 15 minutes with Golden Axe Warrior, you'd be hard pressed to miss its unabashed thievery unless you've somehow been gaming for two decades and somehow managed to avoid bumping into the Zelda series. GAW takes the concept of "borrowing" to a level that seems almost unfathomable at first glance, making every game that has ever been described as a "clone" look like the product of some magnificently visionary gaming brain trust.

I know what you're thinking. "Oh, it can't be that bad. There's no way the creators practically lifted the entirety of The Legend of Zelda and transplanted it from Hyrule into a dwarven forest on the Sega Master System." And that, my friend, is precisely where you're unthinkably wrong. From Moblins to burnt bushes, Keeses to hourglasses, there's hardly an element found in Golden Axe Warrior that wasn't stolen outright or "lightly influenced" from a certain golden Nintendo cartridge. Even the color-coding of items is eerily similar, as blue horns (the generic, dwarven equivalent of that famous Hyrule currency, the Rupee) are worth five, and blue monsters remain a complete pain in the ass to kill compared to their palette-swapped counterparts. Guess what happens when you level up your defense? Yep! You turn red. It may seem like I'm being nitpicky here, but when a game couldn't possibly mimic the first level of its inspiration any more without actually copying and pasting the sprites on the screen, I'd say it's beyond deserving of withering scorn. 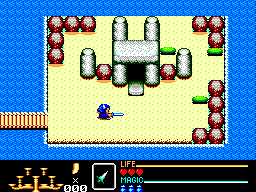 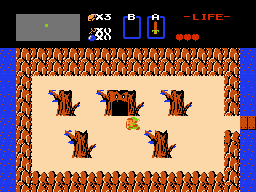 You are shameless, Sega.

Plagiarism aside, Golden Axe Warrior is a surprisingly enjoyable game that actually succeeds in having a few small improvements over its older (or is that illegitimate?) twin sibling. Given that the game came out in 1991, it supports a few gameplay tweaks and additions that could be considered innovations if they still weren't so heavily influenced by its obvious counterpart. One of the more crowning achievements that Golden Axe Warrior brings to the table is its usage of the axe: Here it's a marvelous tool that slices through bushes like a Star Trek villain-of-the-week against an army of Federation redshirts. As anyone who has tried to find a secret entrance in The Legend of Zelda knows, the blue candle is one of the most annoying items ever introduced in a videogame. Even the red candle (when it's finally unearthed obnoxiously late in the game) is slow and cumbersome, taking forever to make clear which bushes are made of weapons-grade Kevlar and which are actual shrubbery masquerading as doorways to homes of irate septuagenarians. Needless to say, the axe's ability to act as expected is a godsend, given the mechanical similarities on display.

Likewise, Golden Axe Warrior's storytelling and graphics are noticeably better than those of its NES counterpart, allowing for the handful of people found throughout the villages to actually have smatterings of personality and charm. That's not to say that the banal and useless are fully missing from the game, as you'll find plenty of hilarious statements courtesy of the NPCs and omniscient narrators sprinkled throughout the journey. The random save spots you come across in the game are also a welcome addition, and help to keep things going at a halfway-decent pace as you repeatedly meet your demise later on in the game. 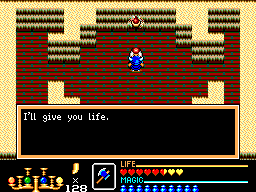 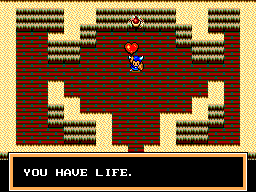 If only it were always this easy.

I mention the save points and prevalence of death because Golden Axe Warrior seems to have extremely generous hit detection for everyone in the game but you. On top of this, the enemies get the momentary invincibility that should only be reserved for heroes, resulting in free hits that suck up your hearts faster than a shield in a Like-Like. Why the programmers thought that invisible, sword-bearing salamanders should be able to strike you at seemingly non-Euclidian angles is beyond me, but such is the rustic charm of Golden Axe Warrior. Luckily Sega must have known that these baddies would be a total pain and programmed them to remain dead even after your hero meets his demise, allowing you to inch yourself forward screen by screen through each labyrinth until you can clear a path to the expectedly outsized bosses.

As if getting struck for unknown reasons weren't enough fun for the aspiring warrior, terribly under-leveled weapons, armor, and heart containers provide for many more hours of frustrating fun. Given that discovering most of these power-ups are contingent upon your powers of clairvoyance, expect a few deaths to accompany your search for life. And even when you do get enough hearts to feel like you could stand toe-to-toe with Gimli, Golden Axe Warrior's difficulty suddenly ramps up halfway through to put you back in your pathetic little place. In other words, courage, persistence, and heart-restoring Golden Apples are your only hope. 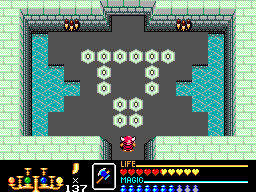 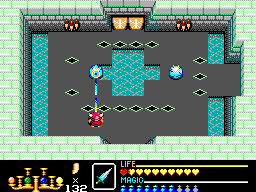 How well would you survive an eyeball laser to the FACE?

Though the game starts out innocently and easily enough, Golden Axe Warrior is not a game you casually stroll through the first time in a few hours of jubilance and joy; itâs a game with a long, arduous path that seems to spare the player little in the way of death and dismemberment. It undoubtedly presents an "old school" challenge that many '80s apologists like myself are sure to enjoy, and a worthy, nostalgia-free demonstration for Zelda fans looking to see just how frustrating their childhood adventures really were.

No matter how infuriating or disingenuous this facsimile of a journey may be, Golden Axe Warrior is best seen as Sega's wonderful homage to The Legend of Zelda. It gives Nintendo fans ten new levels packed with gameplay improvements, new enemies, a formidable challenge, and, least understandably, the opportunity to see what things could have played out if the sprite from Dragon Warrior suddenly felt the need to save Zelda. 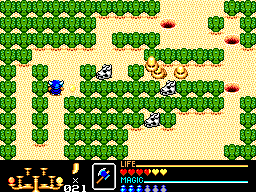 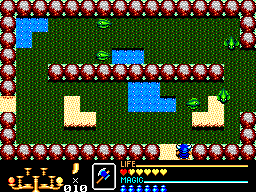 It's difficult to replicate the joy many of us felt the first time trekking through The Legend of Zelda in our younger days, and Golden Axe Warrior allows players to have a newer, practically indistinguishable firsthand experience one more time. It's far from a perfect game -- hell, it's hardly more than your average copy -- but it does grant most fans a chance to rekindle that verisimilitude found in '80s games where entire maps were set before you with little guidance, and every bush held unspeakable potential for adventure.